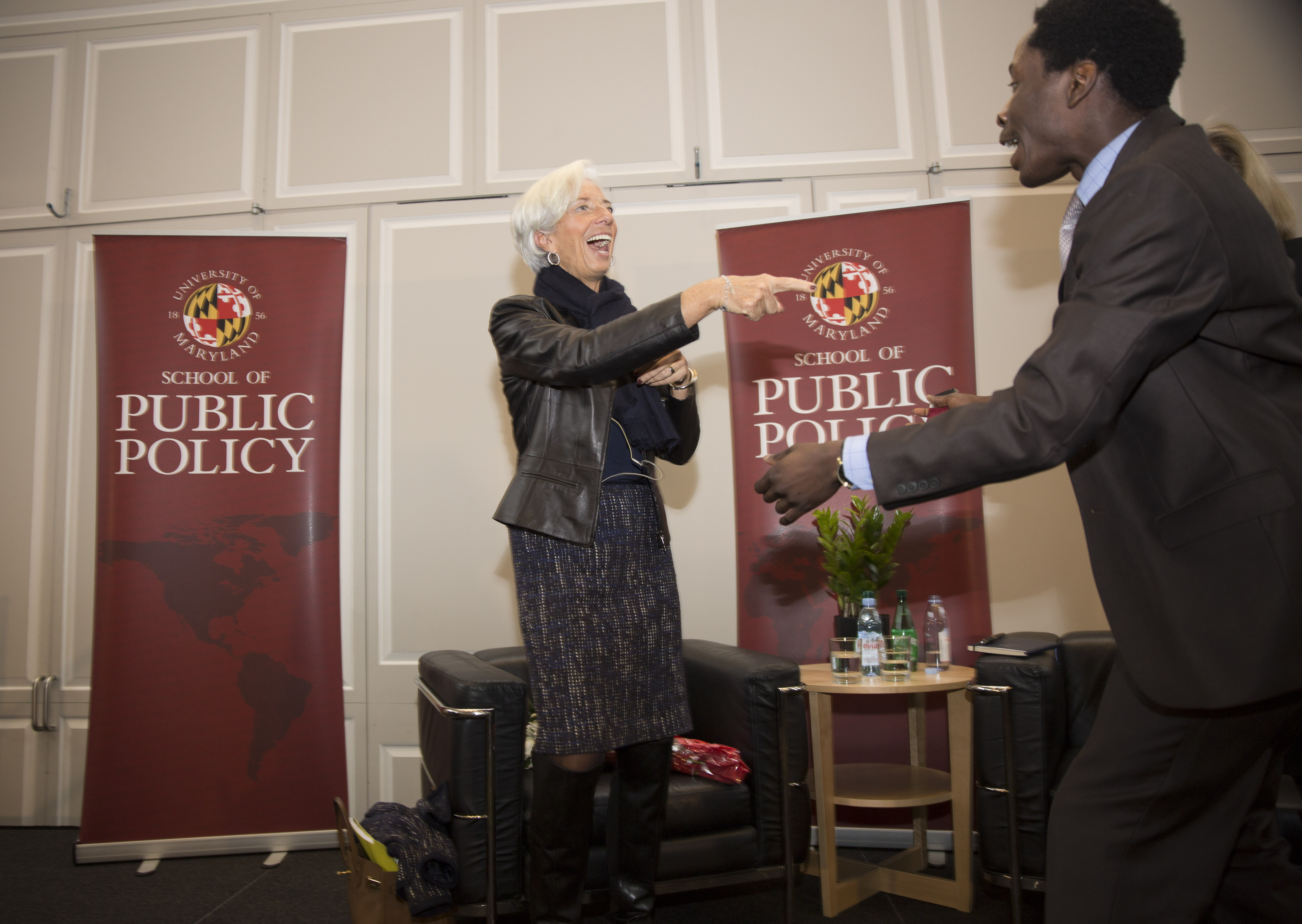 In Samuel Riggs IV Alumni Center, Lagarde discussed the relationship between emerging markets and developing economies and how advanced economies — such as the United States’ — are directly affecting smaller countries’ economic growth.

“Emerging and developing countries, at the moment, are home to 85 percent of the global population,” Lagarde told the crowd of about 100. “These 85 percent matter to the global economy more than ever, and they matter to you more than ever because of strong linkages through trade, finance, economics, geopolitics and personal connections you experience every day.”

The event began with public policy Dean Robert Orr praising Lagarde for being the first woman to lead the IMF and among the first to discuss the effects of economic finance on climate change.

“All before it was ‘cool’ to talk about climate change, Madame Lagarde was one of the leading international voices talking about the risks to the financial system of climate change,” Orr said.

Lagarde emphasized the importance of emerging markets by citing daily scenarios involving imported goods and services. She pointed out how South Korea used to be stricken with poverty, but has transformed its economy to become one of the world’s largest exporters.

She later explained how emerging and developing economies are suffering slower-than-anticipated growth rates because of economic decisions made by advanced nations, an issue that can hurt advanced economies as well.

“Millions of people will find it more difficult to get ahead, and members of the newly created middle classes — that is particularly the case, for instance, Latin America — are going to find their expectations unfulfilled,” Lagarde said.

Lagarde used China’s economic slowdown as an example, explaining that the change in the country’s industrial production has altered its need for oil. When lower demand leads to a high inventory for crude oil, prices decrease.

“Oil and metal prices have fallen by around two-thirds from most recent peaks,” Lagarde explained. “As a result, commodity-exporting emerging economies are under severe stress and some currency have seen some severe depreciation.”

Additionally, she said, the rise in the threat of terrorism has caused some Syrians to flee to neighboring countries. All of these circumstances contribute to what Lagarde described as spillover economics — when one context affects another in a seemingly unrelated way. Countries with scarce resources and revenue should try to focus on improving infrastructure to better promote and stimulate their economies, she said.

Lagarde said the IMF can help both emerging market economies and advanced economies by reinforcing the international monetary system, a set of rules on international trade.

“It was interesting to hear her stressing the importance of an interdependent world — the effects of emerging economies impacts here in America and other developed economies,” Babington said.

Rick Tagne Teta, a senior African-American studies major, said he was eager to meet Lagarde at the event.

“She’s just a strong leader,” Teta said. “For a woman, she exemplifies what it means to move forward.”