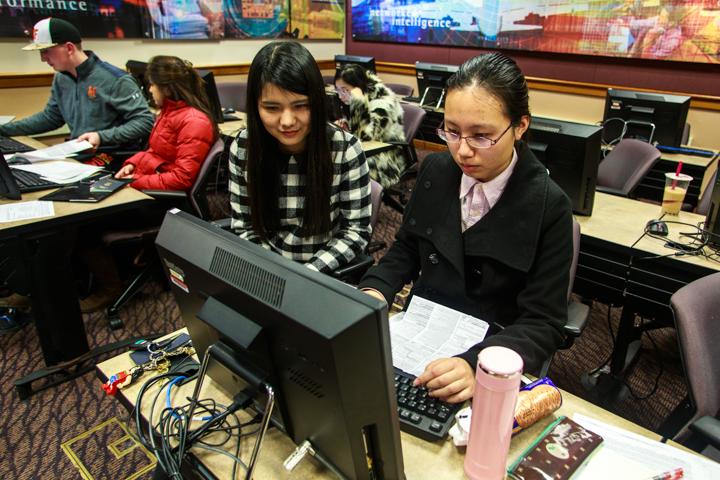 Telecommunication graduate student Pooja Burly Prakash has to file her taxes for the first time — but thankfully she’s not doing it alone, she said.

“I was lost,” the international student said. “I don’t understand the tax system here, it’s very different because you have a state tax and a federal tax; I definitely needed help.”

And that’s where student group TerpTax helps. Prakash brought in her necessary documents and information Monday night to Van Munching Hall and had an IRS certified student file her tax returns for free.

A rotation of more than 90 student volunteers, primarily accounting majors at this university’s business school, have joined TerpTax’s mission of helping anyone in the College Park community file their tax returns. For the past few months, they have been gearing up, preparing and rallying excitement for … tax season.

All the volunteers have gone through an IRS certification process and a specific training session held by TerpTax. They will staff room 3522 in Van Munching Monday through Thursday from 6 to 10 p.m. until April 14.

The group started this program last year, but since then has worked to completely “kick it up a notch,” Magid said. It increased its volunteer corps, revamped its website (http://www.terptax.org), offered a training session and increased marketing so the group can hopefully reach 500 people, which is five times last year’s number. Many of its customers are international students.

“It’s a win-win for us,” said Elisa Trojillo, another student leader for TerpTax. “I get to learn real world tax skills and I also get to help out my fellow classmates and give back to the community.”

Trojillo said she didn’t think she’d ever be interested in the tax field, until she took her first tax class. Now, the junior accounting and information systems major said her experiences with TerpTax will help her in the future, whether it’s a job or internship.

TerpTax volunteers serve as a part of the IRS’s nationwide Volunteer Income Tax Assistance, which had 90,000 volunteers during the 2015 filing season and prepared over 3.7 million returns.

Making sure tax reforms are filed as accurately as possible can make a huge difference for your wallet, Magid said.

“The average refund is in the four digits,” he said. “It’s real money that could fund your spring break, you get a nice colorful check from the government.”