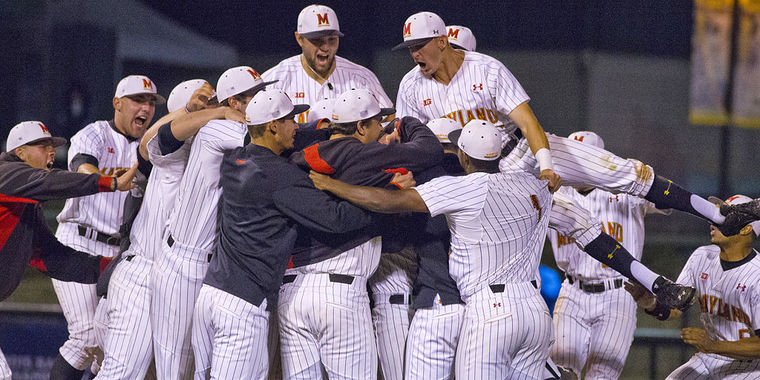 The Terrapins baseball team was three outs away from tying the NCAA Super Regional against Virginia last season.

Coach John Szefc’s squad had experience on that stage, having faced the Cavaliers in the same round in 2014, a series that ended in a loss. This time, after defeating UCLA, the No. 1 seed in the Los Angeles Regional, Szefc’s team had momentum.

It didn’t last. Right-handed closer Kevin Mooney allowed three runs in the bottom of the ninth inning as the eventual NCAA champions ended the Terps’ season in a 5-4 defeat.

That loss still hurts for some players, and the Terps believe that experience will help them in important games this season, which begins Friday night at Alabama. It will be the first game in the Crimson Tide’s new ballpark.

“It still stings a little bit for us,” shortstop Kevin Smith said. “It motivated us all fall. We kept talking about it. We didn’t let it slip past our minds.”

Though the Terps lost 10 players from last season between the MLB draft and graduation, some of the returning players are eager to qualify for the program’s first College World Series. Smith said seeing the Cavaliers win the NCAA title motivated the Terps.

He added that playing in a crucial postseason series last season will help the younger players in high-pressure situations this year.

With 15 freshmen on the roster this season, Szefc said he wanted all his players to be prepared to play in the postseason. So the fourth-year coach scheduled away nonconference bouts against historical powerhouses Alabama and Cal State Fullerton, which both ranked in the top 36 in the country in attendance last season.

“What I’ve found over the years is that you have to create a very difficult schedule,” Szefc said, “particularly a difficult road schedule, to create a strong RPI for ranking and postseason placement purposes.”

As the Terps have emerged as one of the nation’s top teams the past two seasons, Szefc said the players he’s recruited expect to play in significant matchups in hostile atmospheres. So Szefc said he coaches his players on the mental side of the game, teaching them to slow down and relax when things get tense.

“They don’t come here thinking they’re going to be in a sub-.500 situation,” Szefc said. “We talk about those mental things and how to handle the adverse situations, how to get through negative things because there’s a lot of negativity in baseball and a lot of failure. I don’t think it comes as a shock that they want that information, so hopefully that’s going to be able to help them.”

The Terps have two fifth-year seniors — outfielder Anthony Papio and left-hander Robert Galligan. Szefc said the young players have turned to the duo for help.

Plus, the Terps’ projected weekend starters, right-handers Mike Shawaryn, Taylor Bloom and Brian Shaffer, all have experience throwing in the postseason.

This year, the Terps who have played in harsh environments will rely on their experience, and the younger guys will pick their brains. That’s what they plan to do Friday night during their season opener on Alabama’s new field.

“It’s not like we don’t have guys with a lot of game experience,” Smith said. “We still have some stuff we want to get done. We’re still thinking about [last year’s loss], but it’s not going to hurt our progress at all. It’s still in the back of our heads.”