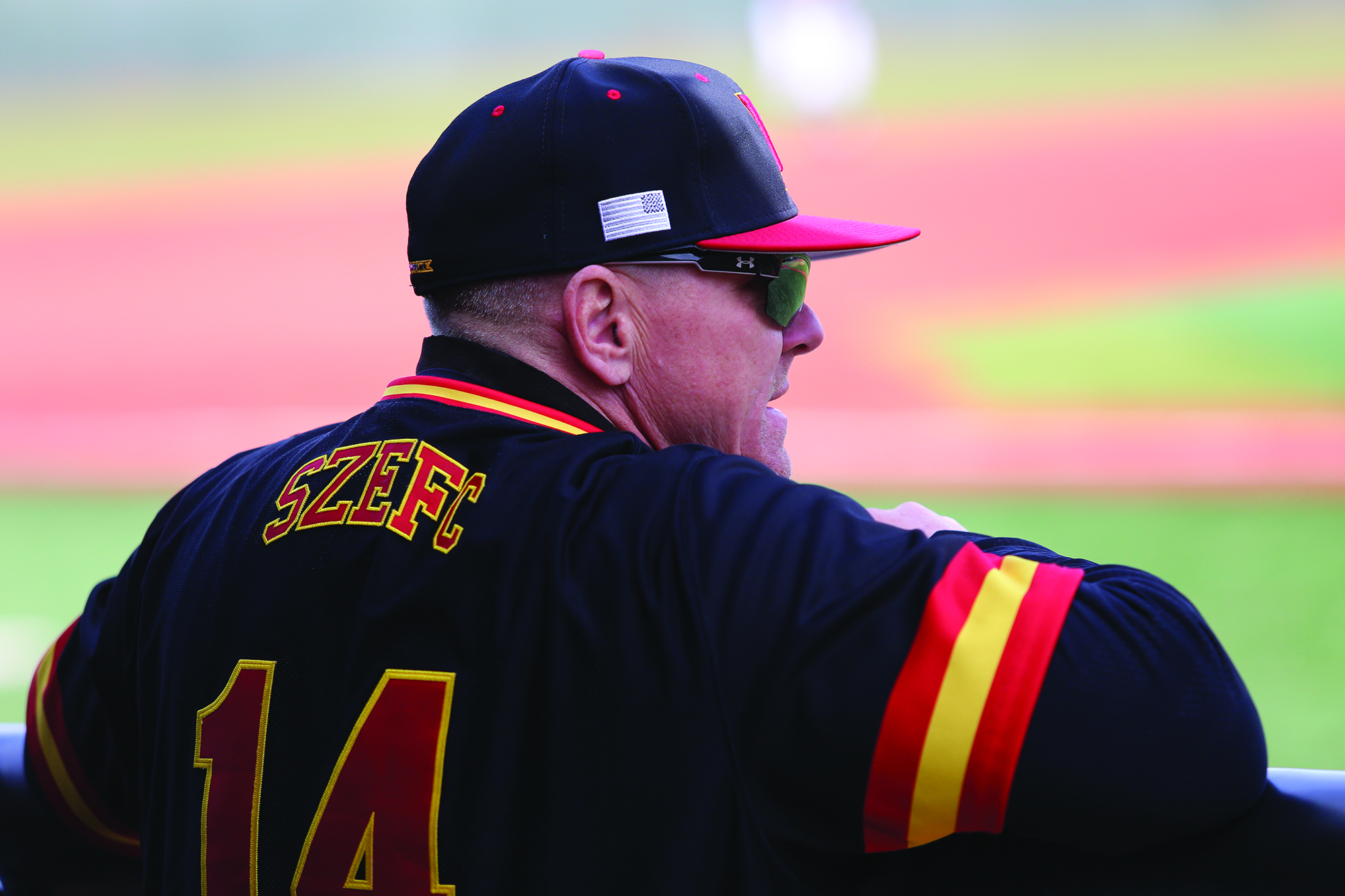 Coach John Szefc lokoks out onto the field during the Terps’ 8-3 win over Minnesota at Bob “Turtle” Smith Stadium on March 22, 2015.

Right-hander Mike Rescigno had just allowed a run, and Parsons was chosen to notch the final two outs of the inning in his Terps debut.

But the Crimson Tide recorded back-to-back doubles against the rookie, scoring two runs to take a 5-1 advantage. So before Parsons could record his first out as a Terp, left-hander Zach Guth replaced him.

Parsons was just one of the Terps getting accustomed to college baseball in the team’s first series of the season this past weekend. Szefc expects them to need time to adjust to the level of play, and that development will continue Tuesday when the Terps play at VCU.

“At some point they have to get their feet wet,” Szefc said. “You’re going to see a lot of ups and downs this time of the year offensively and defensively. It’s a long process.”

The Terps have 15 freshmen on their roster. And because the team lost 10 players this offseason, younger players have emerged as regular starters and contributors.

“Even for me, that first at-bat, there was a little bit of jitters just to get that swing out of the way and get the season going,” said junior catcher Nick Cieri, who started 37 games last season. “It might take a little bit longer for the younger guys to get into it and get comfortable. We’re going to have a really good hitting team.”

Dunn tied a team high with four hits in the series, while Nickens went 3-for-12 over the weekend as the Terps’ leadoff hitter, a role he doesn’t have much experience in.

Nickens said he felt prepared for his first Division I college game because of the coaching staff replicating game-like situations in practice, such as hitting with a two-strike count and with runners on base. Plus, Szefc preaches mental toughness in practice, so when Nickens falls behind in the count, he’s learned to stay calm.

“When you’re having trouble, instead of getting right back into the box and letting everything fly by, step out of the box, find somewhere to look, take a deep breath and try to regather yourself,” Nickens said. “That kind of transitions over to the defensive side too.”

Though Szefc was disappointed to lose two contests this weekend, it was a valuable series for the inexperienced players.

Szefc’s training has already benefited Nickens, and the junior expects Szefc’s approach to carry over to other newcomers as the season progresses.

“We’re a work in progress,” Szefc said. “You can’t let one day or weekend get you too up or too down. We’re just trying to make some progress to [Tuesday].”