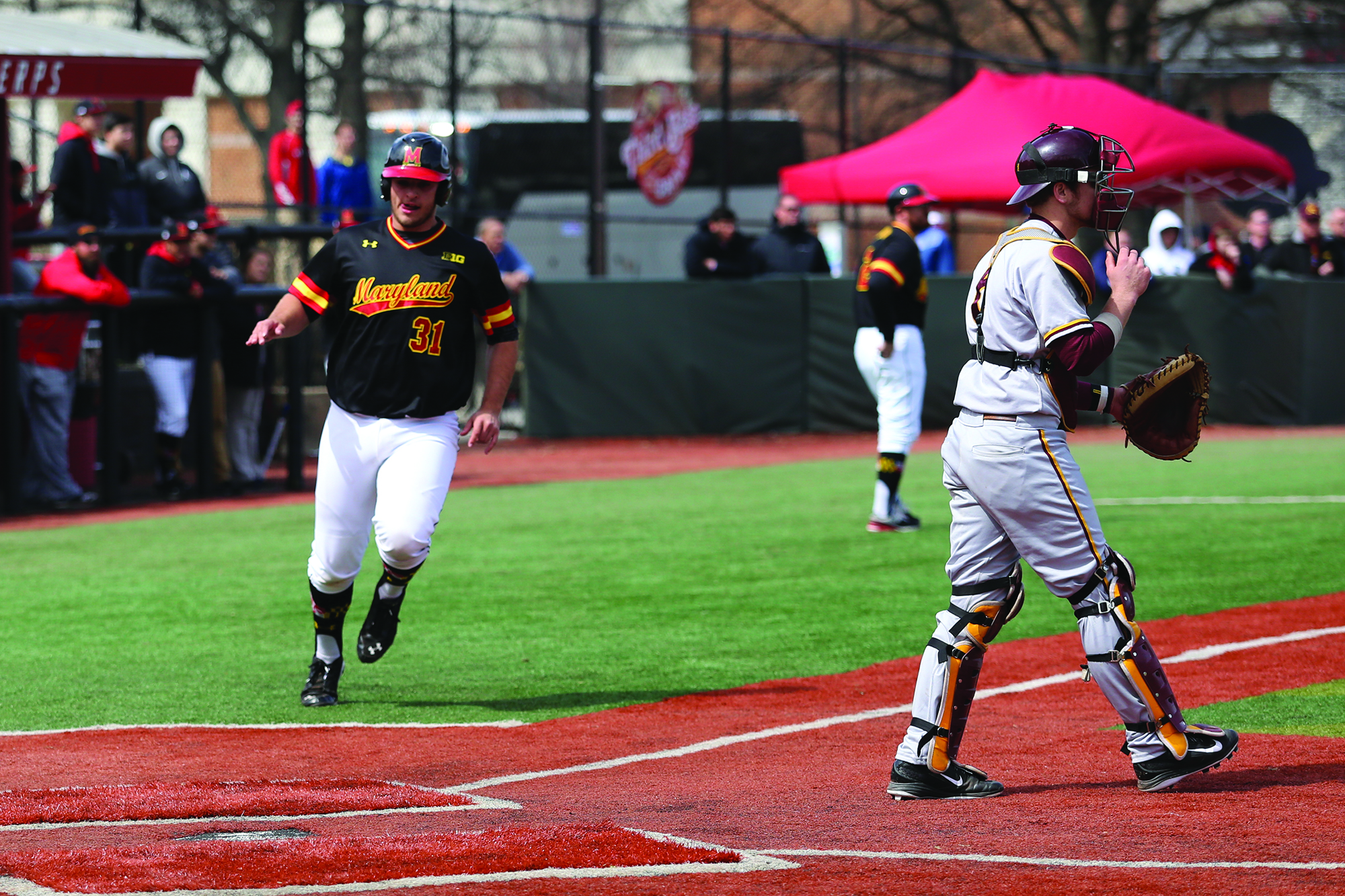 Designated hitter Nick Cieri runs into home base during the Terps’ 8-3 win over Minnesota at Bob “Turtle” Smith Stadium on March 22, 2015.

After finding a consistent spot in the Terrapins baseball team’s lineup in 2015, the catcher broke a bone in his hand in early April, forcing him to miss the bulk of the Terps’ season.

The Hainesport, New Jersey, native returned for the postseason to help coach John Szefc’s squad reach the NCAA Super Regional. And after remaining healthy while playing baseball over the summer, Cieri emerged as one of the offense’s stars in the Terps’ series against Alabama this past weekend.

The junior’s .400 batting average was the best on the team, and he recorded a home run and a team-high three RBIs despite the Terps leaving 18 runners on base in a 2-1 series loss.

“That’s a guy with a lot of experience,” Szefc said. “He’s pretty consistent. That kind of guy is going to be a lot more productive early than a guy with less experience. That’s where you see the difference.”

Cieri started in 37 games last season, but the injury forced him to miss 27 contests. Without Cieri, who hit .299 last year, the Terps relied on other offensive stars to finish tied for third in the Big Ten.

After losing five offensive players to the MLB draft and graduation in the offseason, though, the Terps’ batting order this weekend featured just three offensive players who started at least 30 games last year. So Cieri has served as a mentor for the six newcomers in the lineup.

Outfielder Madison Nickens, a transfer from LSU Eunice, said whenever an experienced player like Cieri is batting well, he asks for advice.

“The older guys are really open to questions that I might have,” Nickens said. “Seeing Nick swing it good, you can go talk to him and stuff like that. See what he’s looking for. That can be a big help.”

Cieri did his part to spur the offense in the Terps’ 9-5 win Saturday. After second baseman Nick Dunn singled in the fourth inning, Cieri, who hit three home runs last year, belted a two-run blast. The Terps went on to hit two more home runs in the inning to take a 6-1 lead.

To improve his durability, Cieri has focused on slimming down since last season. The 6-foot-3, 240-pound catcher worked on nutrition and conditioning in the offseason. With little access to a gym while playing in the Cape Cod Baseball Summer League, Cieri got a membership at a local YMCA to run and lift weights. He finished the season a league all-star.

While the other two Terps consistently in the lineup last season — outfielder Anthony Papio and shortstop Kevin Smith — combined to hit 3-for-23 (.130) this weekend, and the team hit a combined .211, Cieri was able to find success.

About 11 months removed from his hand injury, Cieri is healthy and proved to be the Terps’ most reliable hitter during the season’s first weekend. When Szefc’s team (1-2) plays at VCU (2-1) on Wednesday, Cieri hopes to continue to set the tone at the plate and serve as a role model for his less experienced teammates.

“Whatever it takes to win a game,” Cieri said. “It’s always good to get off to a hot start. I’m just trying to carry that momentum from this game to the next.”