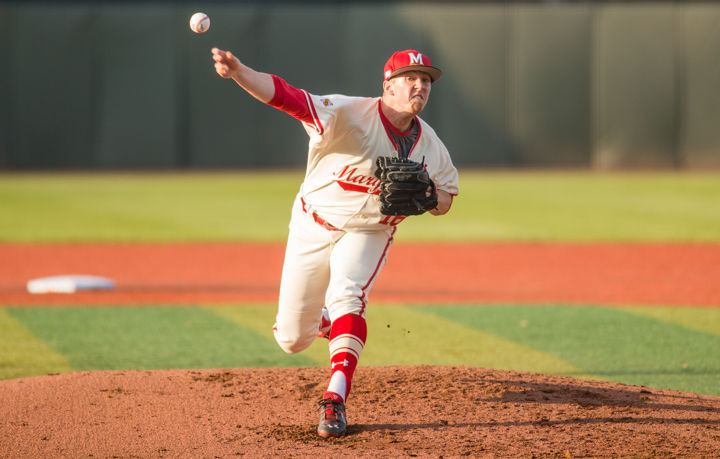 It took some time for Terrapins baseball right-hander Taylor Bloom to establish a role last season.

The then-freshman had difficulty adjusting to college hitters. As a result, he switched between pitching short and long relief, not spending enough time in either role to carve an identity.

Despite not earning a starting role until April 22, Bloom didn’t become discouraged. And when coach John Szefc was searching for reliable starting pitchers down the stretch, he turned to Bloom.

The Crofton native started five games, and Szefc said Bloom put together his two best starts of the year in the postseason to help the Terps reach the Super Regional.

After continuing to improve in the offseason, Bloom has become a regular part of the Terps’ weekend rotation. And when the Terps (1-2) face Rhode Island (0-3) on Saturday, he’ll look to continue his string of successes.

“He kind of forced his way into it,” Szefc said. “He kind of willed himself to success. It would’ve been really easy for him to not be successful in those two games he pitched. But he had in his mind that he was going to be successful.”

Szefc said Bloom’s change-up and ability to control the strike zone make him dangerous. Those skills were on full display in the playoffs.

In the rubber match of the Terps’ series against No. 1-seed UCLA in the Los Angeles Regional last season, Bloom allowed just one hit and one run over six innings, as Szefc’s squad earned a 2-1 victory and a trip to the Super Regional.

Using different types of pitches against the Bruins, who Szefc said thrived against fastballs, Bloom caught hitters off guard before they adjusted to his velocity.

“Coming in from high school, you’re not really sure what’s going to happen. To kind of go out there and kind of see everything, feel everything, you understand what the game’s like, how fast it is, what hitters are like and stuff like that on a college level. Carrying that from season to season is really important just to kind of have confidence in yourself.”

Bloom didn’t let his momentum falter in the summer.

He played for the Gaithersburg Giants in the Cal Ripken Collegiate Baseball League, where Szefc wanted him to gain more experience as a starter. The Crofton native struck out 38 and walked just two over 30.2 innings, including one performance with 16 strikeouts.

In addition, he continued to work on his change-up. Giants coach Jeff Rabberman said Bloom throws one of the best he’s seen.

“You get a lot of kids out of high school that want to throw the fastball, want to throw the breaking ball and don’t really throw their change-up,” said Rabberman, who has coached Bloom the past two summers. “Taylor’s taken pride in knowing, ‘Hey, I can be really successful with the fastball and the change-up.’ We preach that to kids a lot, but it’s not often that kids buy into that.”

When Bloom returned to school in the fall, he felt more confident in his change-up and fastball, but he still wanted to add to his repertoire. So Bloom and associate head coach Jim Belanger focused on Bloom’s breaking ball. It’s now another weapon he uses to keep foes off balance.

So even though the Terps’ other two weekend starters registered at least 11 starts last season, Bloom proved himself worthy of the third weekend spot. Since Szefc threw Bloom in the starting rotation near the end of last season, he hasn’t disappointed.

After earning his first win of the season this past Saturday in a 9-5 victory over Alabama, Bloom will look to tie his wins total from last season this Saturday against the Rams.

“One of the things I was really impressed with is obviously he comes off the best game of his lifetime in a win over UCLA,” Rabberman said. “What do you do after that? Do you say, ‘Oh, I’m the man now?’ Or do you take that success and work harder? Taylor’s taken that success and all he’s done is worked harder.”