ART REVIEW: “Turquoise Mountain” at the Freer|Sackler is beautiful but tone-deaf 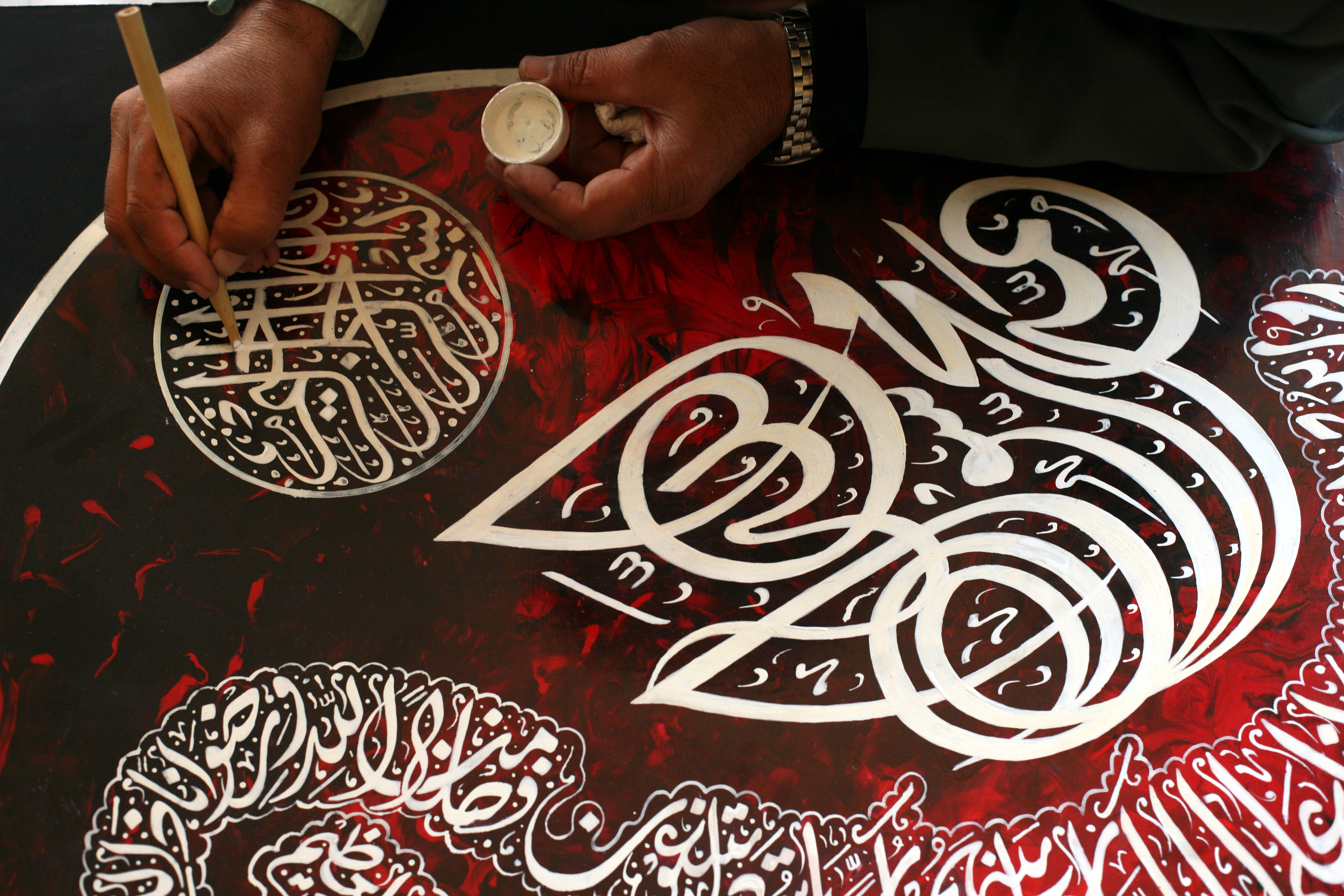 In the year and a half I have covered the Washington art scene, I have never seen more cameras at a press preview than I did for the one opening “Turquoise Mountain: Artists Transforming Afghanistan” at the Freer|Sackler.

The show, which opened Saturday, promises via news release to transform the Smithsonian’s International Gallery into a “vibrant marketplace of Old Kabul” — and it doesn’t disappoint.

Studio-inspired alcoves highlight different techniques, many saved from the brink of extinction by program members.

A cascade of mid-sized bowls by institute teacher Abdul Matin Malekzadah flows from red clay in plain state to primed white with intricate patterns to glazed in fabulous teal.

The Afghan History Carpet is unabashedly colorful and surprisingly modernist. Colors interlock vividly among myriad patterns from all points East. At once crowded and voluminous, the work seems expressive — as gloriously beastly as the Fauves.

Intricately interlocked wood panels by Nasser Mansouri smell of cedar and have surprising weight. The craftsmanship is extraordinary, and per wall text, there’s “not a nail in sight.”

A 2015 calligraphy by institute graduate Sughra Hussainy looks ancient, its gold leaf and natural lapis lazuli pigment reinterpreting a page from the 1930s.

“When I start[ed] my art,” Hussainy said, “I d[id]n’t believe that one day I [would] come here [to the] United States, a very famous exhibition, a very famous museum.”

Hussainy is one of 17 artists who will visit the exhibition for demonstrations and discussions.

“I am very happy it is real that I am now here,” she said at the preview.

But beautiful as it is, the cameras are not here for the beauty. And as international as the news crews are (including Voice of America, BBC Persia, Afghan TV, 1TV of Afghanistan and Arab News), they are not here simply for an international art show.

They are here because this is Afghanistan. Like it or not, this exhibition symbolizes a tentative future for Afghan-U.S. relations. And the gallery knows it.

Dr. Thomas Wide, Turquoise Mountain’s director of exhibitions, began his address in fluent Dari. “We believe that Afghanistan’s culture can be a source of jobs, of skills and of pride,” he said later in English.

“It’s about what it means to be part of a community like Murad Khani, shattered by war and then being rebuilt,” Wide said.

“In 2002, when I first got to Afghanistan, there was very little art,” said Donald Sampler Jr., assistant to the administrator of Afghanistan and Pakistan affairs at the U.S. Agency for International Development, which helps fund Turquoise Mountain. “The Taliban did not tolerate it and the civil war did not allow it.”

“I think this tells a story of hope and redemption,” he said.

“When the foundation began its work, decades of war had decimated the beauty of Afghanistan’s rich and diverse history,” said Dr. Hamdullah Mohib, Afghan ambassador to the U.S. “These treasures were lost, stolen, destroyed or buried. … The job in hand was not only to rediscover the lost treasures but also to rediscover Afghanistan’s lost identity.”

He added: “For centuries, Afghans have been among the world’s most talented artisans and craftspeople. I am eager for people to see the other side of Afghanistan, and that is the artistic side.”

“If I say Afghanistan, if I say Kabul … they conjure up … visions of some four decades of strife, turmoil, ruination,” Raby said. “This is an extraordinary story of the way in which a community found its own voice, found its way of expressing its beliefs in itself through … the creation of a really thriving institute for the arts.”

Because in reality, this is not a story about the individual artists (though what fleeting memoirs they give in wall text are exceedingly compelling), nor even about the art objects. It is a story about an artistic heritage nearly destroyed by war being saved from the brink by Westerners.

And in that story, the Freer|Sackler exhibition misses the mark. Whether bowing to perceived implicit pressure from the government that funds about 70 percent of its activities or unconsciously molding a positive narrative for visitors, the Freer|Sackler has created an exhibition that, while beautiful, is remarkably tone-deaf on the Western role in Afghan art.

A video that begins the exhibition best showcases this. An elderly Afghan man speaks in subtitled sentences interspersed with fast-cutting archival footage of the fighting he describes.

He finishes describing the positive strides made in Murad Khani, a heralding prologue to the exhibition. But as I watched this man speak, I wondered if there might be a sentence missing, a chapter ignored on purpose or otherwise, in this man’s allegory.

When the Americans came, I was here.

Because while it is glorious to celebrate the savior of artistic heritage on the brink, the exhibition completely ignores that the Western world played an unfortunate part in putting it there.

As far as I could find, there is only one mention of destruction perpetrated by a non-Soviet Western power in the exhibition materials: a brief mention of British aggression in Malekzadah’s memoir text.

The politics of this are complex, as Turquoise Mountain (which is Britain-based) is partially funded by USAID, a federal government program. The museum, as a Smithsonian institution, is funded in majority by the government as well.

These two facts are impossible to ignore and hard to avoid. It’s true that without USAID funding, Turquoise Mountain would likely not be able to showcase its visionary work at the Freer|Sackler, a museum that likely would not be so dynamic without government funds.

But museums have an obligation to enhance discourse about art, not loudly promote their own or their government’s interests through omission of key facts. The show is tone-deaf not because it plays down destruction the U.S. may have caused in Afghanistan, justified or not. It is tone-deaf because it ignores that destruction completely.

Yes, “Turquoise Mountain” is a beautiful show and an academically worthwhile one. It is a welcome salve that lets us view Afghanistan anew from a forgotten perspective of centuries-old cultural grandeur that was nearly destroyed. But let us not forget that the military malaise of superpowers including the U.S. caused that heritage’s near-destruction.

It’s hysterical to trumpet the Western savior role yet ignore that, without clumsy intervention by Western powers, no rescue would have been necessary.

It is wonderful that our government is supporting the arts abroad. But let us not forget that federal money being used so virtuously today also paid to covertly arm the Mujahedeen.

Let us not forget that the U.S. government diverting funds and support to Turquoise Mountain today is the same one that postured with the Soviet Union in an endless game of Cold War chess that left Afghanistan a pawn for the taking.

When we say — however rightly — that the United States’ mighty hand helped save Afghanistan’s cultural heritage from decimation in a war-torn land, let us not forget that our same mighty hand did a great deal of the tearing.

Both sides paid in blood, and Murad Khani nearly paid in its history. Now, I suppose, we move forward by returning to an invaluable beauty so long stifled by the atrocities of war.

Let us not forget, then, the terrible price we paid for the priceless and the terrifying hindsight that hints, too surely, that it may have all been in vain.