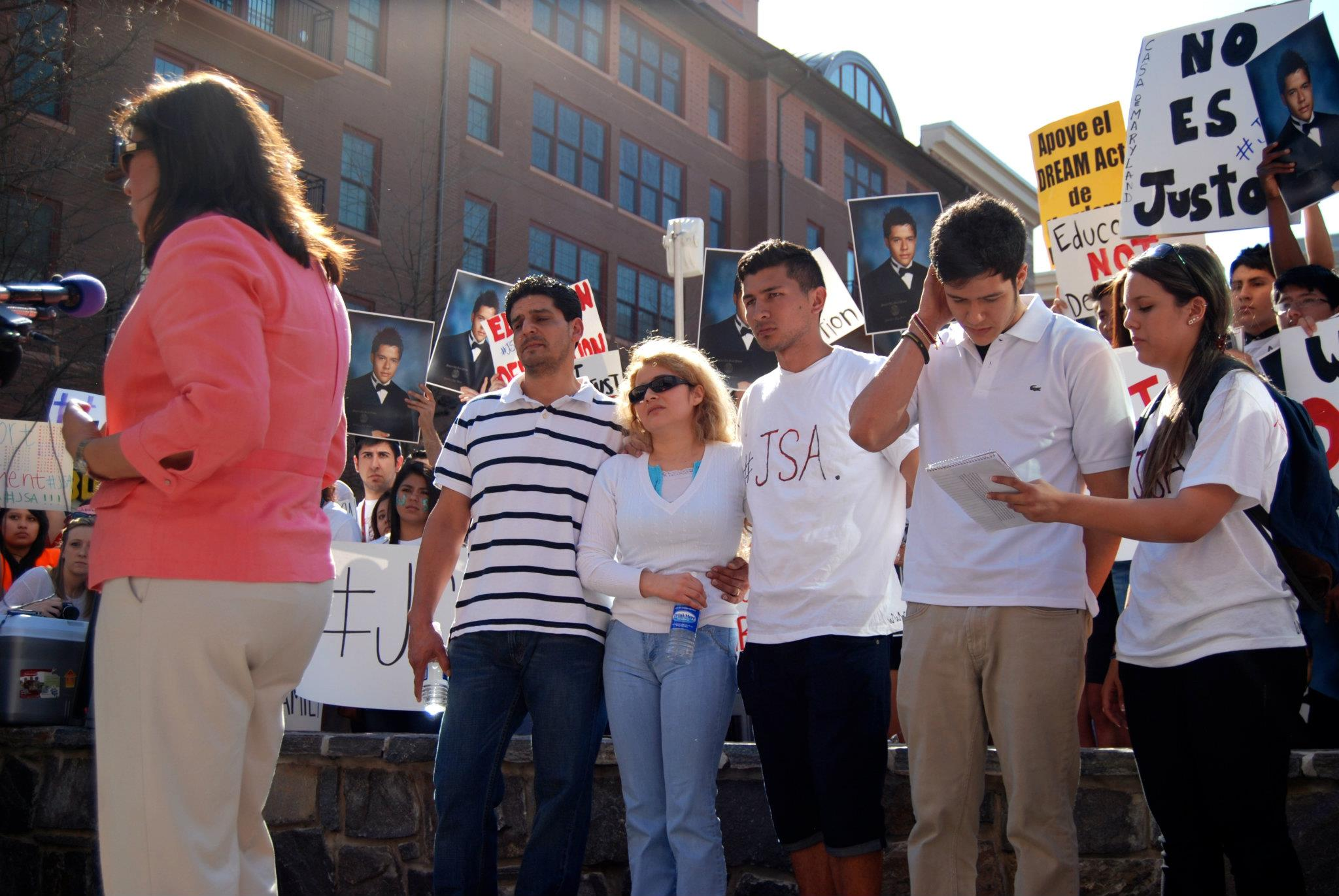 The first night was the worst one.

Walking into the maximum-security block at Worcester County Jail on the state’s Eastern Shore on March 7, 2012, Jorge Steven Acuña and his father began to hear rowdy taunts and obscenities from inmates eager to intimidate the new arrivals.

Acuña, then 18, was overcome by fear. In a block with three layers of doors and no sunlight, the two didn’t know what to expect.

“I was still pretty young,” said Acuña, then a second-semester student at Montgomery College. “The thought of having to fight one of those guys off was really scary.”

Four years ago this week, from March 7 to March 13, Acuña and his mother and father remained in the detention center, awaiting their deportation back to Colombia after living under the radar as undocumented immigrants in this state for about a decade.

While local advocacy efforts eventually led to their release with a one-year reprieve, for Acuña, the experience instilled an unshakable feeling of uncertainty.

“I was living a normal college student life, but then all of a sudden it was like, ‘Nope, you’re going back to Colombia,'” said Acuña, now a senior chemical engineering major at this university. “Life since then hasn’t been completely the same.”

In 2001, when Acuña was 8 years old, his family came to the U.S. from Colombia seeking political asylum after his mother began receiving death threats for her political affiliations.

“The people that were against what [she] stood for were very violent,” Acuña said. “They would … shoot up the house.”

However, the Acuñas were denied political asylum because of a negligent lawyer, he said, and after a few years of failed appeals the family decided to “stay quiet and lay low.”

There were about 250,000 undocumented immigrants residing in this state — 4.3 percent of the state’s population — in 2012, according to Pew Research Center data .

The day immigration officers came to Acuña’s house started off like any other, until a few officers “just show up at our door, and they say, ‘We’re going to take your father,'” he said.

Acuña said he does not know why he and his father were put into maximum security to begin with. Worcester County Jail declined to answer questions for this story about its procedures when dealing with undocumented immigrants.

The night after officers took his family to the detention center, Acuña went with a guard to see a nurse for a procedural checkup and ran into his mother, who wanted to hug him and tell him everything would be OK.

But as his mom rushed forward to embrace him, her guard — unaware that Acuña was her son — “freaked out” and “yanked” her away, he said, an experience that left him “heartbroken.”

That moment transformed his experience at the detention center, Acuña recalled. An inmate who witnessed the exchange told other inmates to leave them alone, he said, and the female guard persuaded the warden to move them into the immigration block on the fifth day.

“Cellmates would come by and just drop off stuff like chips and soda,” Acuña said. “We didn’t have much to say until other inmates came by and made us feel supported.”

The main rush of support, however, was growing outside of the detention center’s walls.

Julio Castillo waited until after his night class ended to answer his friend’s phone call.

“His voice was shaking,” said Castillo, a 2015 alumnus from this university with a degree in geographic information systems. “He’s like, ‘They took Jorge.'”

Immediately, Acuña’s friends scrambled to create a plan to advocate his release. It was a daunting task with many sleepless nights. As college freshmen, they did not know the best way to make their voices heard, Castillo said.

They made lists and sign-up sheets, and put up posters and fliers around the neighborhood and mall. They made a Change.org petition; which accumulated 5,000 signatures from around the country in less than a week; joined forces with an immigration lawyer from CASA de Maryland, an immigration advocacy organization, and talked with local leaders such as Rep. Chris Van Hollen (D-8th) and Sen. Ben Cardin. The hashtag #JSA, Acuña’s initials, quickly spread across Twitter.

It was easy to get people on their side, Castillo said, because Acuña and his family were so selfless and well-liked.

“When this happens to someone who you hold in such high regard, who was honestly studying harder than anyone else around him, it really hit home for a lot of people,” Castillo said.

For Van Hollen, who supported Acuña’s release on Twitter, undocumented families shouldn’t have to struggle to create better lives for their children.

“Their detention is just one example of the injustices that occur every day as a result of Congress failing to pass immigration reform,” he wrote in an email. “I will continue fighting for comprehensive reform so that families like the Acuñas no longer live in fear of being separated.”

Acuña’s friends heard about his release the day before their scheduled rally in Rockville Town Center.

“Steven ended up showing up halfway through and was able to talk there,” he said. “The first thing he sees once he gets out … is like [100] people in Rockville Town Center cheering him on.”

Following his release, Acuña became involved in advocating on behalf of the Maryland Dream Act, which passed later that year.

Acuña is now protected under the Deferred Action for Childhood Arrivals, a 2012 executive order that allows him to stay legally in the U.S., work and pay in-state tuition for two-year periods. He is up for renewal in 2017, but he noted that his parents are not as lucky.

After their one-year reprieve and an additional reprieve in 2013, they failed to receive further protection, he said.

“I could just be getting a call any day of just my parents saying, ‘Hey, they picked us up again, we’re on our way back,'” Acuña said.

Even with in-state tuition, Acuña works 20 to 25 hours a week to cover the costs, often missing discussion periods and office hours. He said he’s also struggled with guilt over going to school instead of supporting his family financially.

Yet through the uncertainty, he’s managed to find a silver lining.

“Everything worked out so perfectly,” Acuña said. “I’m still here.”