Who cheats more: Clinton or Cruz? 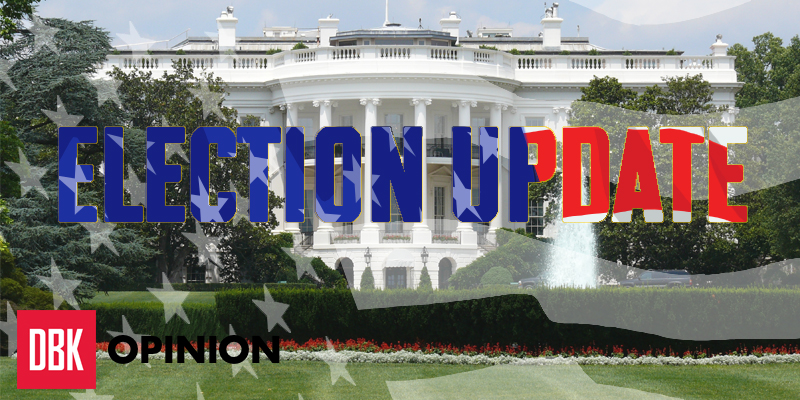 With victories in a number of western states this past week, Sen. Bernie Sanders has started to chip into former Secretary of State Hillary Clinton’s large delegate lead. These modest gains were overshadowed by perhaps the strangest seven days in the campaign — and considering what we’ve seen thus far, that’s truly remarkable. The candidates’ responses to the Brussels bombings, a feud over candidates’ wives and a five-hour line to vote headline this week’s election update.

Can “Birdie” Sanders still come back?

Sanders won critical victories in a handful of Western states, narrowing Clinton’s delegate lead to 1,712-1,004, including superdelegates. He also won the support of a bird that landed on his podium at one of his massive Oregon rallies. Unfortunately, that bird doesn’t quite translate into the hundreds of delegates Sanders needs to catch Clinton.

He trails by fewer than 300 pledged delegates, but Clinton has a lead of more than 400 superdelegates. To win the nomination, Sanders needs to either persuade superdelegates to switch en masse or win close to 70 percent of the remaining elected delegates. Though he enters a more favorable selection of states, he trails in polling in delegate-rich California and New York. Losses here would most likely deal a death blow to his campaign. Sanders must expand his reach in the coming weeks if he wants a shot at winning.

After long voting delays in Arizona, Sanders supporters were quick to accuse the Clinton campaign of cheating — again. This accusation isn’t new; Sanders supporters have been quick to blame the Clinton campaign for election problems in states Sanders has lost. Five-hour waiting lines, uncounted ballots and other concerns around the country are serious matters. But you cannot blame the winning candidate for how a state runs elections.

Ultimately, Clinton is not responsible for how competently (or incompetently) state primaries are run. Clearly, Arizona’s primaries were a mess thanks to underfunding by the Republican state government. She can’t influence that, so she shouldn’t be blamed. Sanders supporters have to stop attacking Clinton like this — it reflects poorly on their own candidate.

On Wednesday, the National Enquirer ran a story claiming that Ted Cruz has cheated on his wife with five different women. The story was short on facts and long on speculation, but that didn’t stop social media sites from spreading the “news.” Two of the women identified have already denied it (including Donald Trump’s national campaign spokeswoman). Many journalists poked holes in the speculative piece.

The timing of the piece was certainly strange. Earlier this month the magazine endorsed Trump, and the story was published during a week of feuding in which the wives of both Trump and Cruz were attacked. It had also been a hidden rumor for the last few months (see #TheThing on Twitter).

A scandal like this would derail a Cruz campaign built on conservative evangelical support. But there also isn’t any evidence that these affairs actually happened, besides hearsay. The magazine’s CEO, David Pecker, is a close friend of Trump’s. And though the magazine has gotten some scandals right in the past (remember John Edwards?), it has been wrong far more often. It makes for good tweets, but the evidence isn’t there, and until it is, it’s simply unsupported mudslinging.

Will a split convention fracture the Republican Party?

Trump’s persistent bashing of fellow candidates, including the recent attacks on Cruz and his wife, have helped create a war within the GOP for the party’s soul. Conservatives are unhappy with the establishment — and Trump, particularly for his assaults on Cruz. The “establishment” wing of the party is less than thrilled about either candidate and fears that Trump will lead to a catastrophic defeat for Republicans. Trump supporters — mostly right-leaning populists and anti-establishment Republicans — would be unlikely to support a moderate or anyone Trump has attacked. They would be furious if Trump were to lose by a convention vote.

If Trump wins, at least some conservatives walk. If Cruz or a popular conservative is nominated, Trump supporters may walk. And if a truly establishment candidate (think Mitt Romney) were to be nominated, there might be a massive defection. Either way, it leaves the party struggling to turn out voters for House and Senate contests, much less the presidential election. One increasingly likely scenario: Trump wins, conservatives rally around a third-party candidate. This would hand the Democrats the presidency, but give Republicans a chance to win down-ballot elections.

A less likely but catastrophic scenario has an irreversible defection, with either conservatives or Trump supporters leaving the party permanently. That would be the crisis of a lifetime and cause unprecedented electoral chaos in the modern era. But as we’ve learned this season, just about anything can happen.

This election has been full of strange and shocking moments. It’s a real-life (albeit bloodless) House of Cards political drama that has been unfolding for the last few months and will most likely continue until November. At this point, perhaps the only thing more shocking would be if two of the candidates were having an affair with each other. Just imagine the hashtags on Twitter.

Matt Dragonette, opinion editor, is a senior accounting and government and politics major. He can be reached at mdragonettedbk@gmail.com.