The unusual homecoming of Jayson Blair 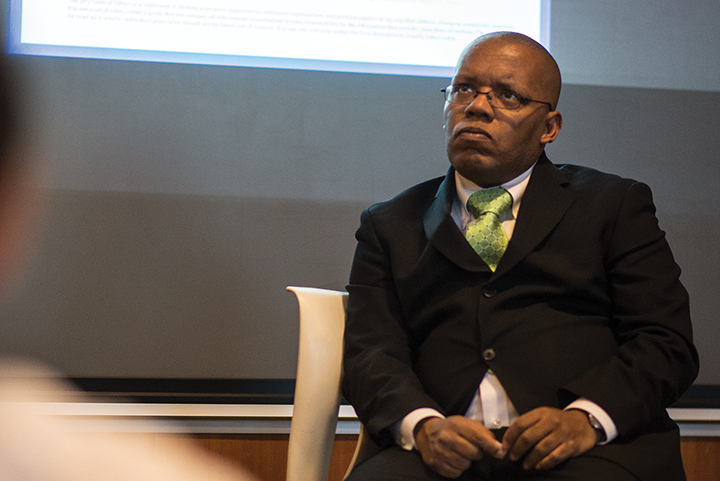 Jayson Blair, A former student of Philip Merrill and Editor and Chief at The Diamondback, returned to the Journalism school for the first time for a presentation on ethics.

“You wrapped a rope around your neck, tied it to all our feet and jumped off the side of the building.”

That’s the late New York Times media critic David Carr on former Times reporter Jayson Blair, a conversational point that came up often in their talks before Carr’s death in 2015 — according to Blair, at least.

As with most of the erstwhile Diamondback editor in chief’s stories, there’s probably a nugget of truth in it somewhere, albeit exaggerated for maximum impact and obscured by invented details. Nonetheless, with Carr no longer around to corroborate the minutiae, it’s a fitting sound bite for the subject of an unprecedented 2003 front-page Times story that laid bare Blair’s repeated acts of plagiarism and fabrication.

In April of that year, the San Antonio Express-News had reached out to The Times regarding unusual similarities between Blair’s story on a U.S. soldier missing in Iraq and an article by one of its own reporters published eight days prior. The ensuing scandal turned up a whopping 36 plagiarized or fabricated stories authored by Blair and led to the resignations of The Times’ top two editors five weeks later, tarnishing the careers of a score of other industry veterans in the process.

It also cast a lasting pall over this newspaper and the university’s journalism school, which Blair attended but never graduated from and of which he is either the most famous or second-most famous former student, depending on the status you ascribe to E! News anchor Giuliana Rancic. (That Blair is the most famous Diamondback alumnus is, unfortunately, not up for debate.)

So when the diminutive scourge wheeled into a classroom at this university’s journalism school yesterday for the first time since his world and those of others shattered 13 years ago, the students and faculty assembled for a discussion seemed a bit on edge. The tension was thick — were one to cut it, the instrument required would’ve been diamond-tipped. I sat there myself, a bit perplexed by the whole ordeal.

I’ve always been skeptical of the popular media narrative on Blair, who’s presented as something of an antichrist to students preparing to enter an industry dramatically different from the one he briefly inhabited, and one much better equipped to root out similar lies.

The man I expected to encounter would’ve convinced me that these pervasive issues were more immediate concerns than the actions of someone who had held my position nearly two decades ago and last wrote for a newspaper when I was 8.

The Blair I met dispelled that notion.

His unexpected good cheer and breezy apologies disarmed me, though that much should have been unsurprising, given his current self-employed life-coaching gig. (He alleged that he has no shortage of clients.) Blair downplayed the damage he had caused to everyone but himself, citing personal struggles that included a bipolar disorder diagnosis and the stress that accompanied working at a top-flight newspaper.

But when the discussion turned toward his journalism-school mentors, some of whom sat in the audience, the impact of Blair’s transgressions hit home. The hurt in professors’ and administrators’ voices was palpable as they questioned the sincerity of Blair’s contrition and the impact of his lies. That hurt, as raw as it seemed more than a decade later, pales in comparison to Blair’s betrayal of his colleagues and readers.

Seek the truth and report it. That’s the essence of the journalistic code Blair tore to shreds as a reporter at The Diamondback and The Times. Without that, this industry — and on a lesser scale, this publication — is nothing.

As Blair left the classroom after the discussion, journalism professor Carl Stepp turned away from a group of students gathered around him in the Knight Hall lobby.

“We’re talking about you!” he deadpanned.

Matt Schnabel, editor in chief, is a senior journalism major. He can be reached at diamondbackeditor@gmail.com.