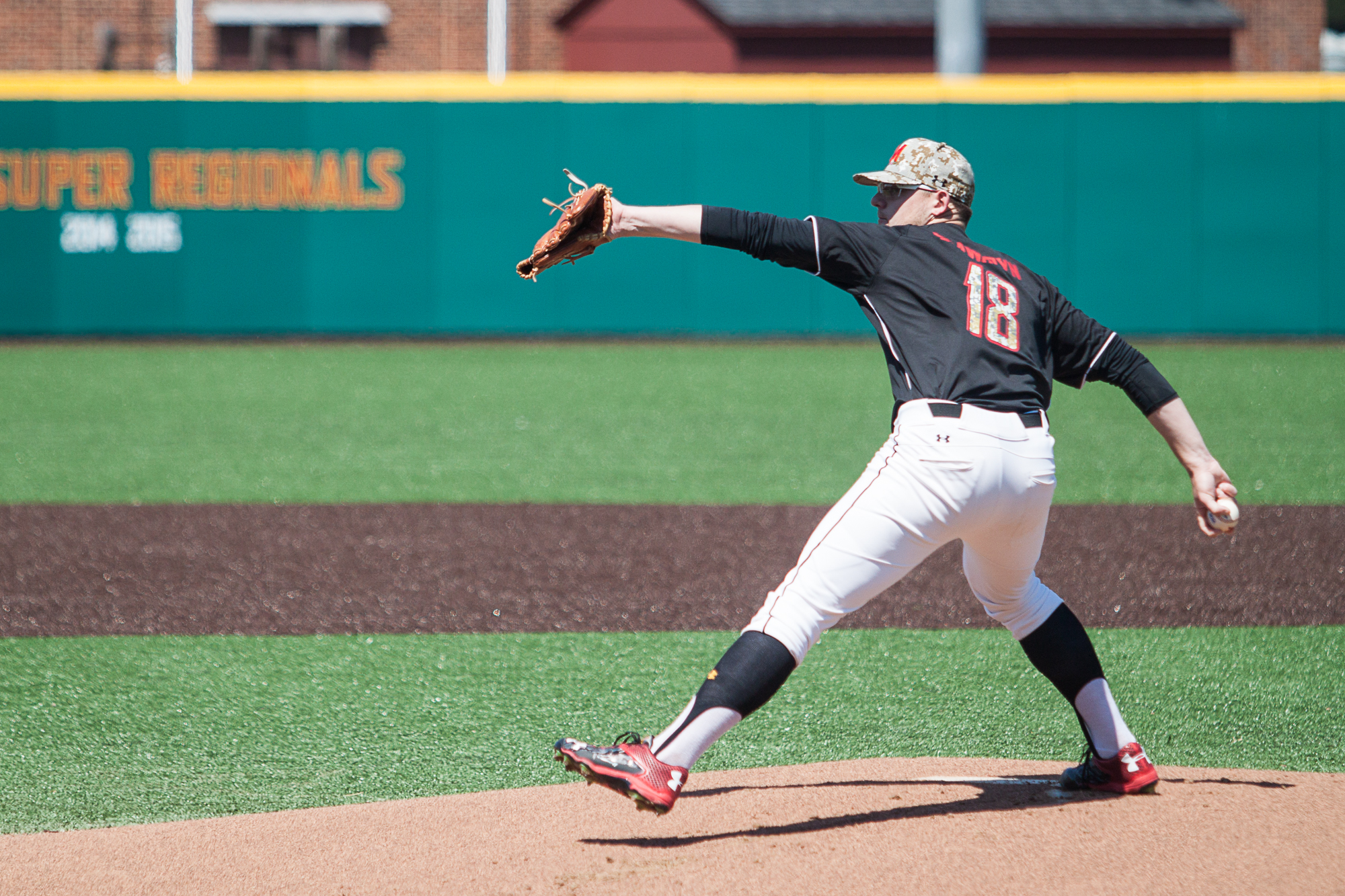 On June 7, 2014, the Maryland baseball team took the field against Virginia in its first-ever Super Regional appearance. Senior ace Jake Stinnett earned the start to open the series.

The Terps lost the three-game set against the Cavaliers, ending the Terps’ season and Stinnett’s college career.

For the next 23 weekend series, the Terps started right-hander Mike Shawaryn on the mound in the opening game. That streak ended this weekend against Ohio State, when Shawaryn was moved to the Sunday slot after struggling to start his junior campaign.

The preseason All-American responded with one of his better starts of the season. He did allow four runs but he struck out 10 Buckeyes over his 6.1 innings of work. The bounceback, the team said, wasn’t a surprise considering Shawaryn’s maturity.

Shawaryn said some of his problems this season have been caused by a tentative gameplan stemming from his lack of confidence. That, more than anything, is what he looked to fix in the week leading up to his start Sunday.

“I talked to the coaches a lot and they helped me through it,” Shawaryn said. “[And] I did some reading.”

Mike Shawaryn’s stats for the first eight games are very different between the 2015 and 2016 seasons. (Graphic by Julia Lerner/The Diamondback)

Sunday was a step in the right direction, but Shawaryn still ran into some problems against the Buckeyes. He walked a pair of batters and gave up two runs in the third inning. But even then, he showed mental savvy.

Ohio State’s second run of the third came on a bloop single into right field on a hit that Szefc said he’d “like to think we should [catch].” Shortstop Kevin Smith agreed, and the infield met with Shawaryn before the next batter to “keep his confidence up.”

“He threw a great pitch and it got lost in the sun a little bit, but that’s alright,” Smith said. “He’s been pitching well.”

After the meeting, Shawaryn punched out first baseman Troy Kuhn to end the inning.

“I just told [second baseman Nick] Dunn ‘I’m going to get this guy for you,'” Shawaryn said. “I’m going to pick them up for the countless games they’ve picked me up. It was my turn.”

Before his turn in the rotation, Shawaryn watched sophomores Taylor Bloom and Brian Shaffer make strong starts during Friday’s doubleheader. Bloom (1.99 ERA) and Shaffer (2.55 ERA) have both outperformed Shawaryn so far in 2016, prompting the rotation shift.

But instead of harboring negative feelings about being replaced by the underclassmen, the Carneys Point, New Jersey, native has done his best to learn from them.

“I just tried to pick their brain a little bit,” Shawaryn said. “I was just like ‘Hey, do you see anything different I’m doing’ and they gave some really good input.”

Plus, Szefc said Shawaryn’s not worried about himself.

“Mike wants what’s best for this team,” Szefc said. “If him pitching on Sunday is best or if him pitching on Tuesday or Saturday’s best, I think he’s going to buy into it. And that’s one of the reasons why he’s such a special guy.”

After the rough start to the season, Shawaryn admitted his confidence wasn’t always as high as it was last year. And he was no longer attacking hitters the way he wanted to.

Thanks to his maturity, though, the junior was able to rediscover some of his sophomore form in a rare Sunday start.

“We need Mike Shawaryn to be the guy he is,” Szefc said. “And that was a good solid start by Mike.”