REVIEW: Marine Band, UMD Symphony WWI program at The Clarice was no less than performance art 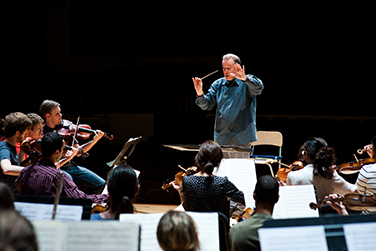 In his uniquely Impressionist style of exploring melody from different tonal progressions much like Claude Monet explored corners and alcoves through gradients of light, French composer Maurice Ravel evaluated Europe after World War I by dissecting its musical tradition, even if he may have said he wasn’t.

With marshal’s drum and cavalry’s clip-clop, Ravel unraveled a Viennese waltz into a distorted version of itself, no longer ticking one-two-three with the metronome nor lilting on the upswing of fine ladies’ frocks.

It was telling of postwar Austria-Hungary, curator Patrick Warfield posited between offerings from The University of Maryland Symphony Orchestra and “The President’s Own” U.S. Marine Chamber Orchestra at the Clarice Smith Performing Arts Center.

“Can the death of an empire be heard in the destruction of its dance?” Warfield asked.

What the orchestras created onstage in a two-hour, one-day-only performance was not a mere concert. It was no less than a superlative piece of performance art.

Not the dull, inscrutable schlock that feeds an artist’s narcissism and leaves watchers faking understanding, but the kind of deliberate, calculated narrative that educates, inspires and presses listeners to think on a higher plane.

The deepest pity is that it was only performed once.

The program played on every aspect: using genre to show change in human soul as the boots of war wore thin; using continent of origin to show differences in national feeling; using disparate lyrics or tunes to show the turning tide of public opinion; even mixing and separating the two musical bodies methodically to dichotomize the military (uniformed, deliberate, assured) and the student (intrigued, civilian, and naïve to the horrors of war).

As war became imminent, Gustav Holst’s “Mars, The Bringer of War” heralded the oncoming outburst in a classical, intellectual manner.

Following a work by Edward Elgar urging British support of Belgium’s decimated monarchy, the program then shifted focus to America, as soloist Gunnery Sgt. Sara Sheffield joined with a solitary piano on the vehemently antiwar “I Didn’t Raise My Boy to Be a Soldier,” a song bursting with desperately oblivious naïveté that what was surely coming simply wouldn’t. Sheffield returned twice more to sing other popular tunes as a ground in the era’s public sentiment.

With the sinking of the Lusitania in 1915, though, attitudes changed on the American home front and overseas, if not without dissonance.

Charles Ives’ “From Hanover Square North, at the End of a Tragic Day, the Voices of the People Again Arose” relied on somber, conflicting tones from the string section, the brass and an offstage small ensemble in the wings to communicate the disjointedness of a nation slowly coming to terms with what the Great War would bring.

One presented the tones of a streetside hurdy-gurdy band, one the murmurs of a city crowd unsure of its future and one the soul of a nation on the brink.

The three or so disparate melodies interacted and drowned each-other out until above all others rose the notes of “In The Sweet By and By,” the old gospel hymn.

From the ashes of the atonal song rose “Lament” from British composer Frank Bridge, eulogizing a 9-year-old girl who perished on the Lusitania.

After intermission, the two ensembles were deliberately separated as patriotism ran low on the front and soldiers saw more than they ever had — and more than those at home could ever comprehend.

Ernest Farrar’s “Heroic Elegy” trumpeted the heroism of soldiers from one who knew it. Farrar died on the Western Front just weeks after the work’s premiere, Warfield, who is a university musicology professor, said in narration.

A two-part Ravel work played musically with the idea of loss — generally the loss of cultural paragons and traditions to the fires of war and specifically the death of composer friends killed in World War I.

It was here more than ever that the shift was profound. A George Butterworth song invoked the memory of those who died in the Second Boer War in heroic fashion, saying they died a noble death, as sung by military soloist Master Sgt. Kevin Bennear.

Sheffield returned again to mourn with “In Flanders Fields,” an Ives lament that quoted taps as it laid the dead and the war to rest.

Both orchestras reintegrated themselves physically to reflect on what had happened and what truly was lost. This is where Ravel dismantles the waltz, showing that old Europe, stately and classical, is dead forever.

The war invaded every aspect of life, and invaded Holst’s The Planets series as “I Vow to Thee, My Country” was woven into “Jupiter, The Bringer of Jollity,” inserting an aspect of sadness and patriotic heart befitting the new century to a piece entirely classical in its other interpretations.

Ending with happy “Jollity” brings in the final naïveté, this encompassing civilian and military alike. It’s somber but forward looking, confident the world, if irrevocably changed, will progress from the need for war into a new age of reason.

If only they knew this sentiment’s obliviousness. War had been brought — it would not, for the next century, go away lightly.