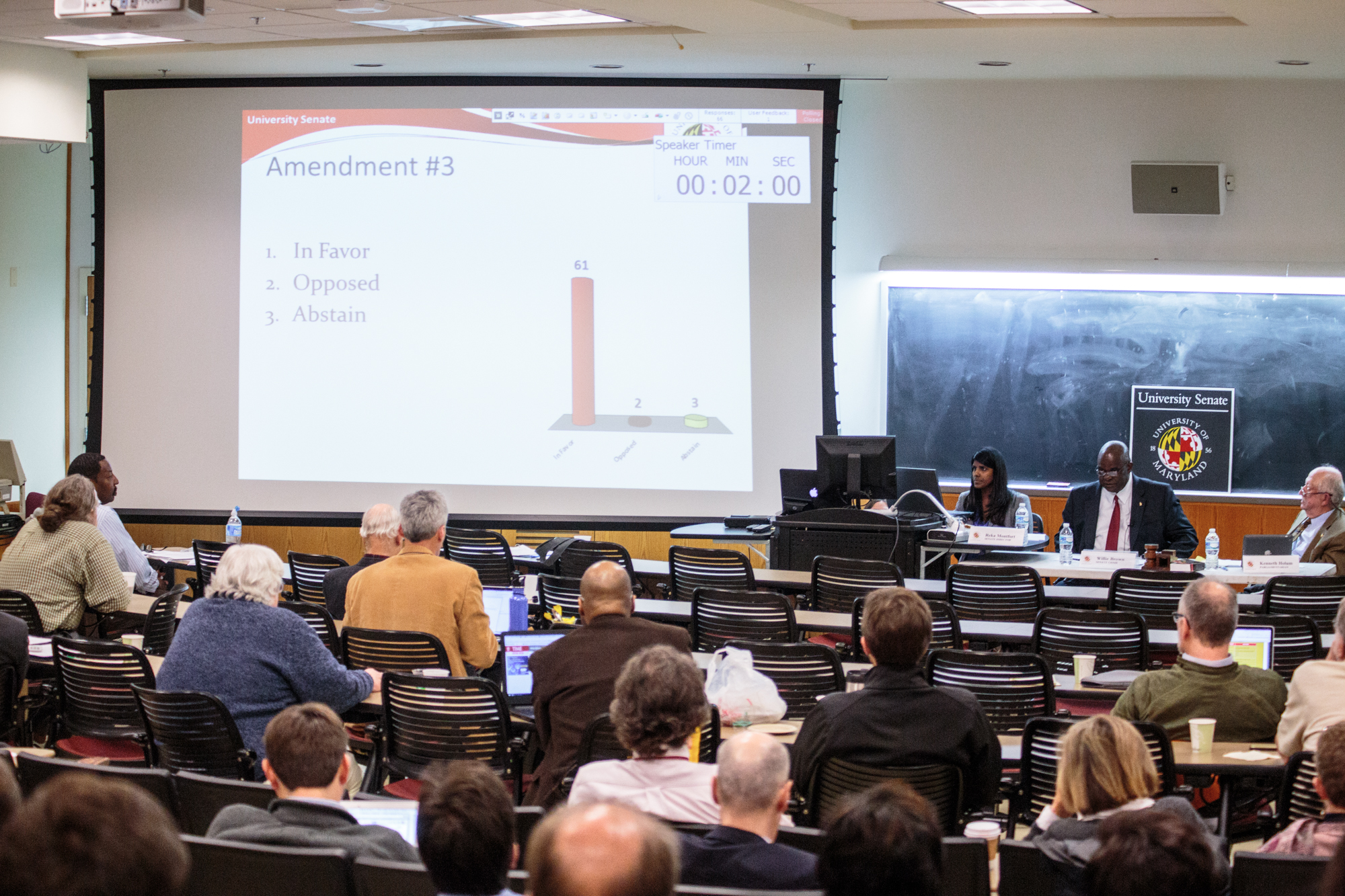 Rankin will send the Maryland Global Cybersecurity Initiative to the senate’s Research Council for consideration and deliberation next fall, and she said she hopes it will come back to the senate floor at the end of 2016.

“Maryland should be a major force in cybersecurity because of all its strengths that we already possess — because of its geography, because of its connections with these federal agencies and corporate leaders,” she said. “But we haven’t stepped into the sector in a way that many people felt we could and should.”

The initiative has five main areas of focus: executive programs centered on education and certification for business leaders; partner programs and applied research that will include faculty, graduate and undergraduates students; collaboration with the National Cybersecurity Center of Excellence; academic programs across many of this university’s colleges and in K-12 education; and a broadened inclusion of all disciplines in cybersecurity research, such as journalism, public policy and the sciences.

Rankin credited public policy professor Michael Wertheimer, who previously worked as the National Security Agency’s director of research, as the main person behind this idea.

“He’s a very committed, selfless person, and saw this same opportunity and need and really wanted to be a part in helping Maryland find a path into this leadership position [in cybersecurity],” Rankin said.

The specific details of the initiative are not yet developed, Rankin said, and they leave room for changes, critique and input from the university community, which is why she said she sought the senate’s feedback. The plan does not yet have a specific plan for funding, leadership or structure, she said, but it’s something administrators will be working on in the coming months, including in the Research Council.

“It’s going to be a big area of endeavor and risk going forward for a very long time,” she said. “The opportunities are knocking at our door. If we don’t pick this up, others will … so I feel that there’s urgency around this.”

Faculty senator Ethan Kaplan said he supported the idea of the plan, but he cautioned that the initiative shouldn’t grow too large and under one umbrella.

Jonathan Katz, the Maryland Cybersecurity Center director since 2013, brought up many concerns with the initiative, including the relationship and coordination between already existing programs such as the cybersecurity center and the Honors College ACES program. Rankin said she appreciated his perspective and asked for his help as the initiative moves forward.

Research posed another big question — especially incorporation of restricted research, which under certain situations and contexts cannot be openly published.

“We have to ask the question of what other research at this school is being affected by this initiative and being thrown under the road,” said Matthew Evanusa, a graduate student senator from the computer science department.

Thursday was the senate’s transition meeting, where new Chair Jordan Goodman took over for Chair Willie Brown. The body also picked the senate chair-elect, Daniel Falvey, to serve during the 2017-18 academic year. Senators voted on special committees as well, though outcomes are not yet announced.

“There’s an opportunity for the University of Maryland to really make an impact, but it’s expensive and we have to be very careful that we don’t undermine what’s already very high quality at the university,” Falvey said. “We can sometimes see issues from a different perspective than administrators do, and I’m very excited about what we’re going to do the next year and the year after.”