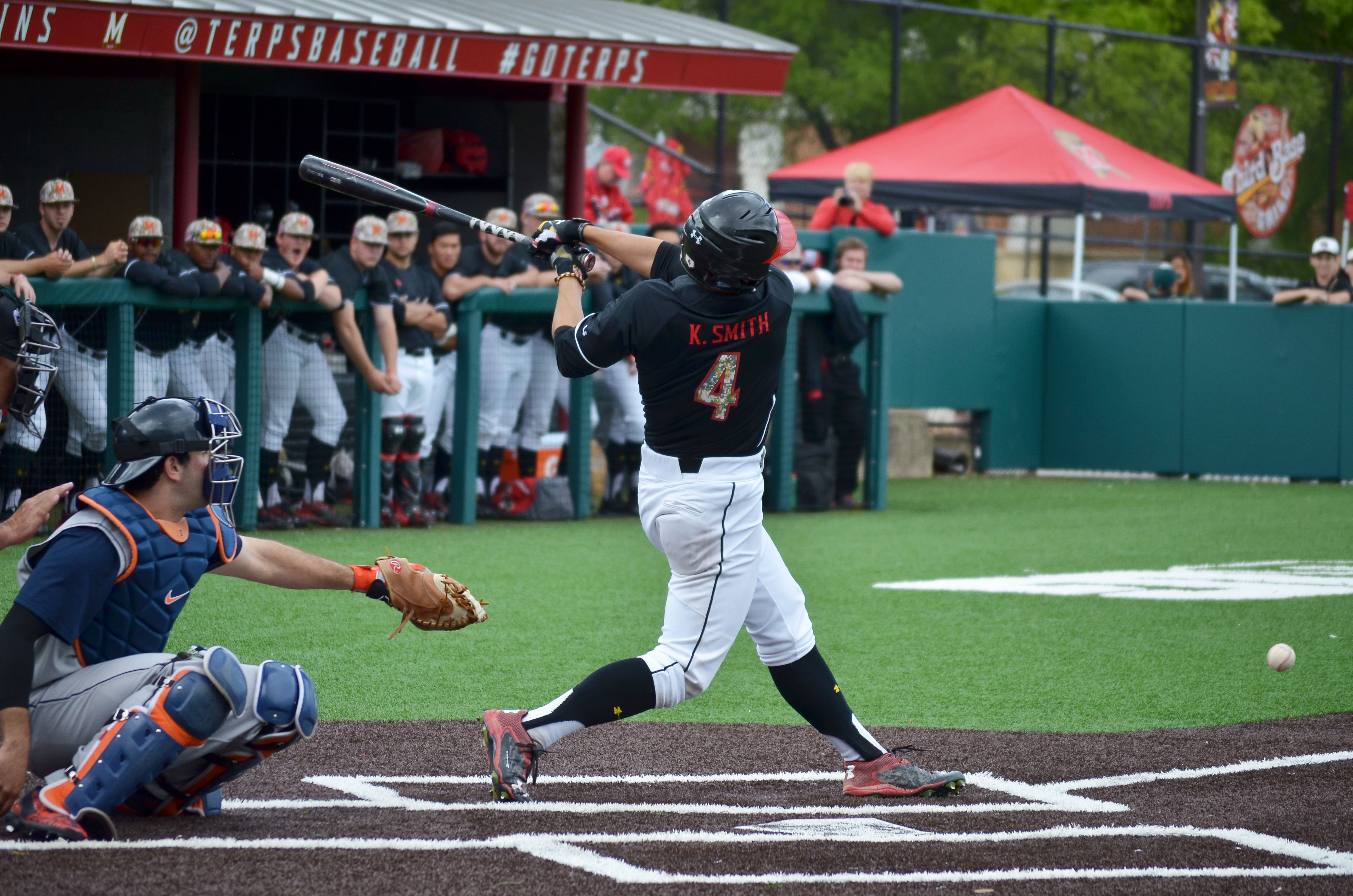 The Maryland baseball team struggled to drive in runners in the second game of its doubleheader against Illinois on Saturday.

Through six innings, the Terps had managed one hit and stranded six runners on base. But in the seventh frame with his team trailing 1-0, shortstop Kevin Smith gave the Terps the hit they were looking for throughout the game.

Down the stretch, coach John Szefc said his team needs its more experienced players to increase their production. So when the Terps (25-21) play at West Virginia (27-19) on Tuesday, Smith hopes to build on his production from Saturday.

“That’s what our more experienced players are supposed to do,” Szefc said. “You’re talking about a guy that’s played pretty much everyday since he got here. He’s played in the Super Regional, and he’s got as much experience as any player on this field. What we would’ve expected there is a good at-bat. He gave us that and a lot more.”

Last season, D1Baseball.com named Smith a Freshman All-American after the rookie made significant contributions to the Terps’ run to the Super Regional for the second straight year. Smith, who hit in the second spot in the lineup, played in all 66 games and posted the fifth-best batting average (.273) of players on the team who took at least 130 at-bats.

This year, Smith, again second in the lineup, and right fielder Anthony Papio are the only two offensive players who played in at least 50 games for the Terps last season, so Szefc said it’s crucial for Smith to play well and set an example for the younger players.

“A lot of our experienced guys really put it on us to do that and come through for the team,” Smith said. “Not as much [to] give ourselves pressure but just to make sure that we’re ready and focused when that time comes.”

Smith is hitting .262 this season, the fifth-best of those who have taken at least 60 at-bats. While struggling to stay consistent at the plate earlier this season — Smith was moved down to sixth in the lineup at one point because his on-base percentage dropped — the sophomore made some adjustments. Among the changes were letting the ball travel deeper into the zone and moved his hands back in the box.

He was 0-for-2 at the plate before hitting his home run Saturday but remained positive. Smith studied left-hander Doug Hayes before the game and found that the redshirt sophomore throws fastballs when he gets down in the count.

Hayes threw a first-pitch ball, so Smith expected to see a fastball on the next delivery. He was right.

“If we’re going to win more games, we need Kevin,” right-hander Hunter Parsons said April 6 after Smith hit a two-run home run against James Madison. “That was just the start of it for the rest of the team, and that really got us going for the game.”

In the Terps’ rubber match against Illinois on Sunday, Smith went 0-for-5 from the plate in Maryland’s 5-4 defeat. Szefc said the Terps, who are in seventh place in the Big Ten, can’t afford to have their veteran players struggling at the plate.

For Maryland to make the Big Ten Tournament, which the top eight conference teams qualify for, Szefc said the East Greenbush, New York, native needs to keep making game-changing plays like he did Saturday.

“If you ask him, he would tell you ‘It’s not like a shock. It’s not like relief. It’s what I should be doing,'” Szefc said April 6 of Smith’s two-run home run performance against the Dukes. “If you want to be good, your better players got to play good. Down the stretch, we need that guy to play up to his capabilities.”