Reveling in the ruins: Hubert Robert shines at National Gallery 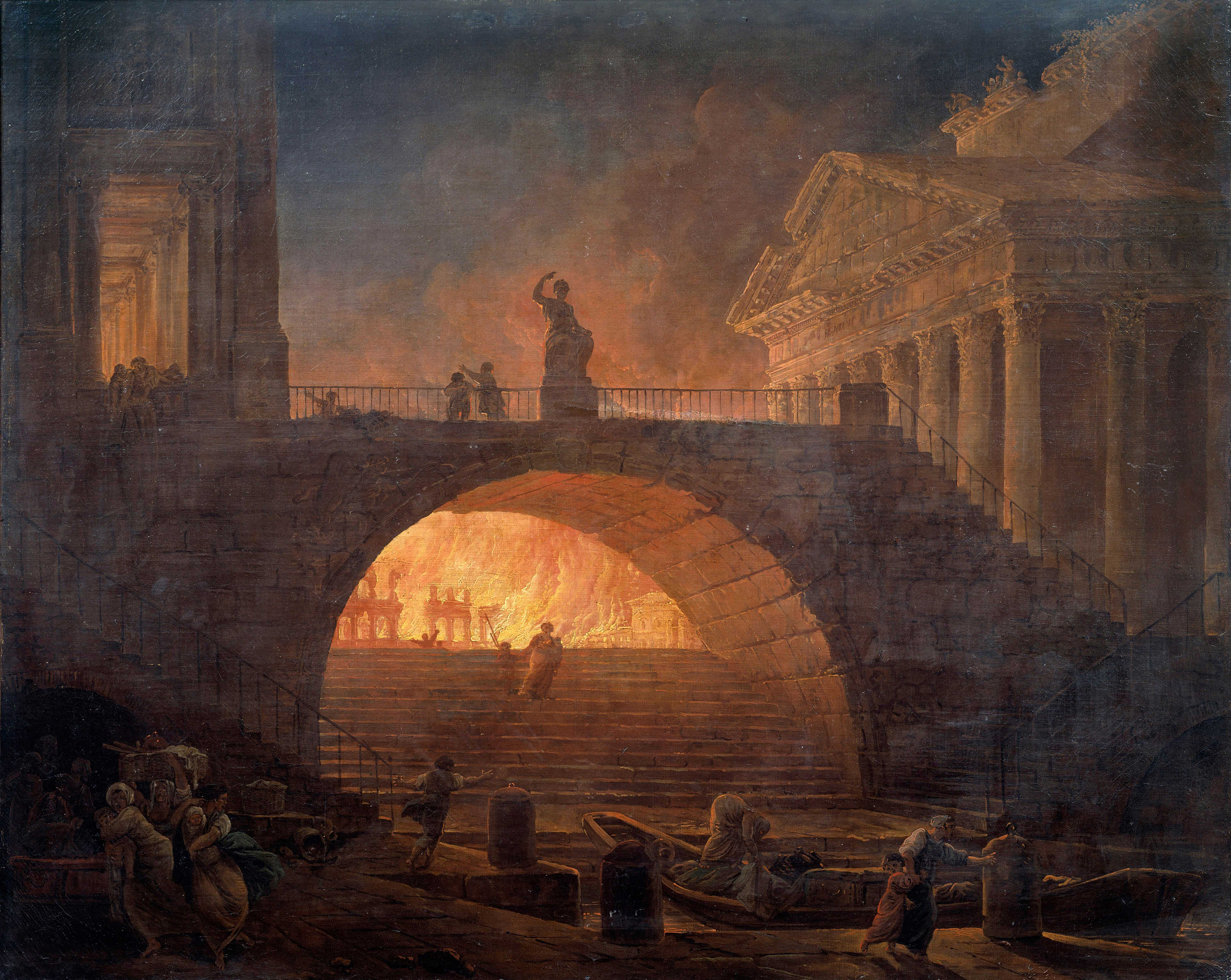 The French artist Hubert Robert (both ‘t’s silent) “has enjoyed a steady level of appreciation from American museumgoers,” according to National Gallery Director Earl Powell III, “who perhaps know him better for the nickname … Robert of the Ruins.”

In a magnificent, first-in-the-U.S. monograph of the ruin-master’s work opening June 26 at the NGA, the reason for that nickname becomes blatantly and wonderfully apparent.

“He depicted collapsed structures of all types,” Powell said. “Not just those of Ancient Rome, but also those created in his own time through urban renewal projects, natural and man-made disasters, and even the desecrations of the French Revolution.”

Drawing from various collections in partnership with the Louvre, the exhibition presents Hubert’s paintings and works on paper in dialogue. The artworks show buildings of the Classical era and, later, his own in various states of decay, providing an ambiguous collection of morals that comment playfully, if morbidly, on the relentless passage of time.

Some works, like A Hermit Praying in the Ruins of a Roman Temple, could act as fodder to the decaying classical symbolism some artists use to communicate the superiority of Christian mores, here consecrated by the white-cloaked monk poring over an enormous Bible.

But to reduce Robert to so vainly pious a goal is wrong, as it betrays a startling misread of his work and an ignorance of his rather Bacchic social life.

Other works seem to parallel the European trope that everything after Rome was a desperate attempt to re-achieve it, but that feeling, while valid and certainly a component of Robert’s imagery, is a bit too medieval for the 18th-century artist.

Instead, one gravitates to the reaction of philosopher and critic Denis Diderot, as quoted by exhibition co-curator Yuriko Jackall at a press preview Tuesday morning.

“These ruins inspire in me grand ideas,” Diderot wrote. “Everything comes to nothing, everything perishes, everything passes, only the world endures, only time remains.”

The somber yet intriguing sentiment is most literally expressed in Robert’s Landscape with Arcadian Shepherds, an homage to the famous Nicolas Poussin work commonly known as Et in Arcadia Ego. The melancholy works show country folk stumbling upon an enormous tomb that reminds them that even in paradise, death lurks.

Robert uses both of these themes — the common people and the passage of time — often throughout his works.

The denizens who populate his scenes vary. Primarily commoners doing common tasks (hanging laundry from an equestrian Marcus Aurelius statue; leading the family cow over Rome’s Ponte Salario bridge) interspersed with occasional aristocrats and, in one work, even Jesus Christ himself.

Some attendants are architects and explorers consumed by the majesty of their surroundings, and some commoners are similarly enthralled. But, for the most part, the activities are quotidian: whether an object is consecrated with importance due to its age, it is still a bridge; still a water source; still a useful place to hang laundry.

Robert reminds us that the structures were once purpose-built, if decorated. Only the passage of time, and the sacredness it endows, had made us think otherwise.

He plays with the idea of importance in works called capriccios, which transpose “random monuments from different time periods, … artfully brought together to create new, completely imaginary landscapes,” per Powell.

These fantasies allowed him to take “increasing liberties with place and setting to strengthen the visual power of the image,” said Jackall, the gallery’s assistant curator of French paintings.

“The genre of the capriccio was also a way for Robert to highlight the collision of daily life with the more grandiose past,” she said.

Ere long, though, the long-ago destruction of classical treasures (evinced by rampant moss, cracking stone and the occasional tor of rubble) takes on a much more active role, as buildings of Robert’s present are shown not centuries later in ruin, but actively being destroyed.

The Bastille, similar to the Saint-Lazare prison Robert inhabited and painted from during the Reign of Terror, is razed. The Château de Meudon, a royal hunting palace analogous to Robert’s patrons’ homes, is pillaged and dissembled — a stark reminder of the fate many of those patrons met at the guillotine.

Most shining is Robert’s deft negotiation of his own mortality, exhibited in two magnificent canvasses that close the show.

“In this pendant pair on loan from the Louvre, … we see him return to one of his favorite themes,” Jackall said. “These paintings show the grande galerie of the Louvre in radically different circumstances.”

In one, Robert inserts his own self-portrait methodically copying after Raphael as Parisian citizens amble past, absorbing the halls of Robert’s beloved institution, which he helped start). In the other, that hall lays in waste, its columns toppled and its ceiling broken open to reveal the angry sky of an imagined dystopia that, mercifully, has not yet come to pass.

“Robert’s message does not seem to be pessimistic,” Jackall said. “In the midst of the rubble, one statue is shown standing: Apollo Belvedere, considered at the time one of the most important artworks in the world.

“It is as if Robert the painter and Robert the museum curator wish to underline the fact that the passage of time had left this masterpiece intact,” she said.

Among peasants cooking on an open flame and three boys goading one another to loot, an artist sits desperately trying to recreate the Apollo Belvedere on an as-yet empty tablet.

Perhaps this is an allegory to the lost, classical past. Perhaps this is a story of the Revolution, which took so many cultural treasures as collateral. Perhaps, even, it is an optimistic view that even should the Louvre’s walls fall, artists will still create things.

Whatever it is, it is Robert’s startling, stunning reminder, to himself more than anyone, that tempus fugit, and even in Arcadia, death persists.