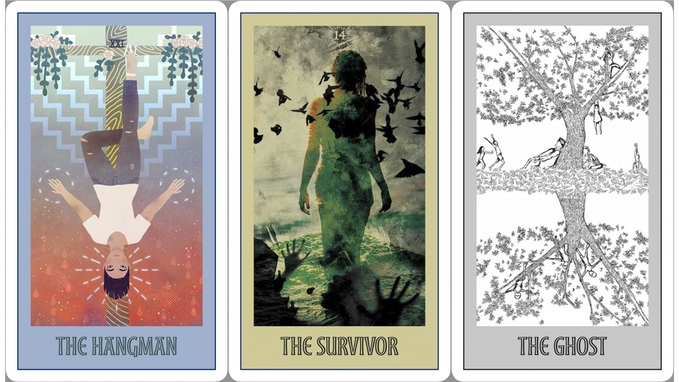 University of Maryland researchers are finding a new way to raise awareness on the mental health hardships Asian Americans face.

The Kickstarter project, “Asian American Tarot: A Mental Health Project”, is part of an effort called “Open in Emergency,” which has more than 70 collaborators and has raised more than $20,000 since launching its Kickstarter page on July 19. With more than 400 supporters on Kickstarter, the campaign is sponsored in part by the university’s Asian- American Studies program.

Mimi Khúc, a visiting assistant professor within the Asian-American Studies program, said she, along with 25 contributing volunteers, recreated and renamed several figures that would normally appear in a regular deck of Major Arcana tarot cards. Some of the traditional cards include names such as “the Devil,” “the Lovers” and “Death.” But more than half of the tarot cards in the project are retitled, Khúc said, among them “the Refugee” and “the Adoptee.”

“We put our heads together and came up with new figures to … title the cards drawing on Asian-American history and Asian-American experience,” Khúc said. “So that people could actually use the cards to think about the kinds of forces that shape their lives.”

Each card in the project is accompanied by text written by authors involved with the Asian-American Literary Review and its networks, Khúc said, which is another difference between these cards and the traditional tarot cards. Traditional cards do not include text.

The project’s funding will go toward printing costs specific to its January edition at the Asian-American Literary Review, a place for emerging writers to advance dialogues, according to its website. Those who donate $10 on Kickstarter will receive a digital copy of one of the tarot card. Individuals can also submit donations to get other artistic pieces related to the project.

This Kickstarter campaign is a means to “start a larger conversation,” Lawrence-Minh Bùi Davis told The Washington Post. Davis is the founding director of the Asian-American Literary Review and an Asian-American Studies professor at this university.

Davis said he “decided to use fortune-telling because that’s something that’s already important across many Asian-American communities,” according to The Washington Post article.

The project also considers the forces “that create unwellness in Asian American life,” Khúc said. These forces include immigration, racism and discrimination.

“We want to link those larger forces to issues of mental health,” Khúc said.

Other aspects of the project include a mock Diagnostic and Statistical Manual of Mental Disorders, which is used in psychology to list and define mental disorders one might have, Khúc said.

The project will continue to be funded on Kickstarter until Aug. 18, according to its donation page.

“The community response has been really overwhelming and really great,” Khúc said. “It’s really amazing to have people say: ‘Yes we need this. This matters to us.'”

Correction: Due to a reporting error, a previous version of this story incorrectly stated that there were more than 70 collaborators for the tarots card project. That number referred to the number of “Open in Emergency” project collaborators. This story has been updated.