Every year a student dies from hazing. Hazing Prevention Week wants to end the practice. 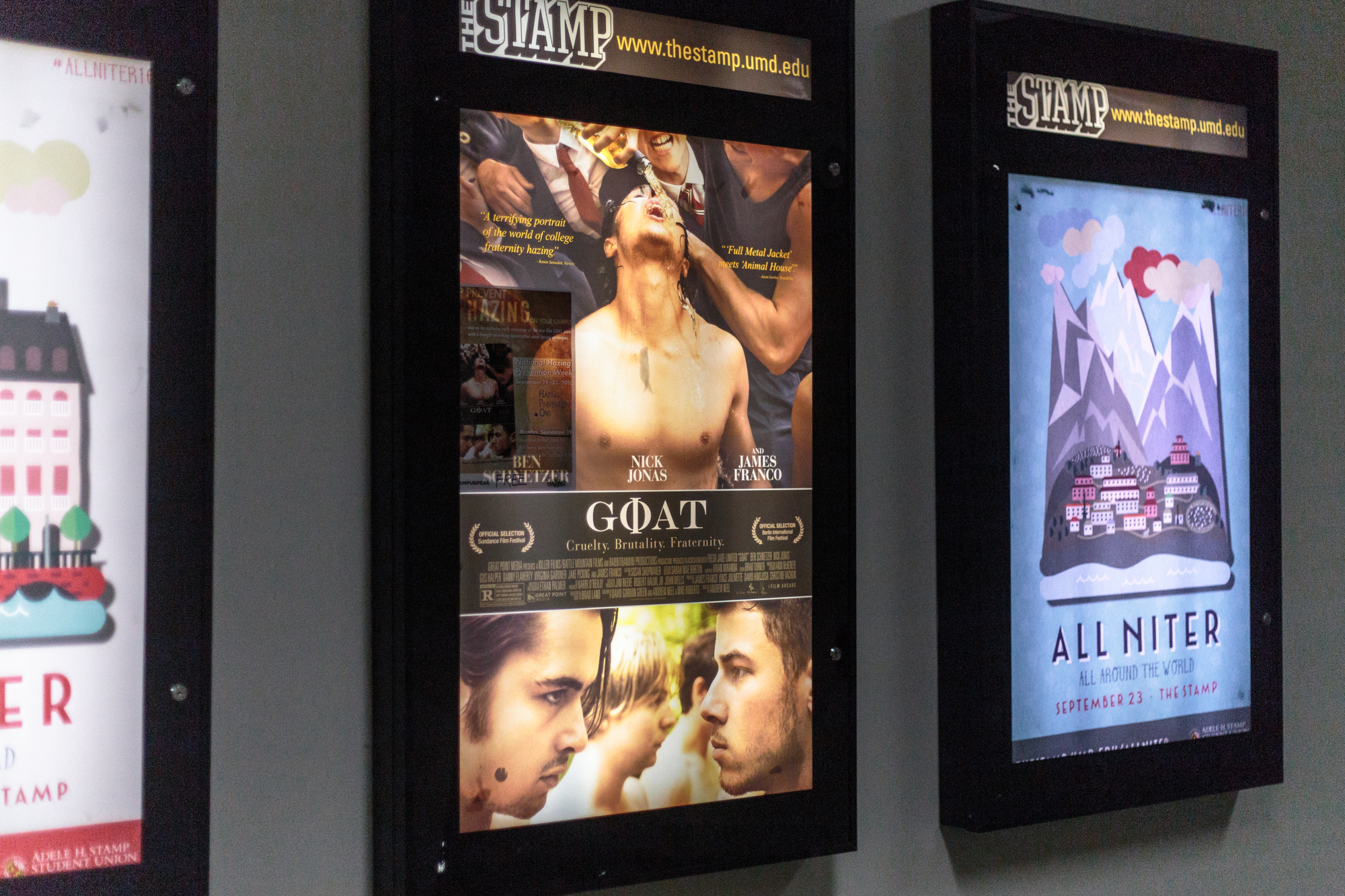 After a night of heavy drinking to celebrate joining Phi Sigma Kappa in 2002, a University of Maryland freshman fell unconscious. In the morning, he wasn’t breathing, and his fraternity brothers took him to the hospital.

Since 1970, there has been at least one hazing-related death on a college campus each year, according to a 2008 study by the University of Maine. Hazing can also result in injuries and mental health issues, according to the study.

Goat, a film adaptation of a fraternity member’s memoir that details his traumatic pledging experience, played at Hoff Theater in Stamp Student Union on Monday night to kick off National Hazing Prevention Week. A mediated discussion with students about hazing followed the screening.

Students packed into the 550-seat theater, spilling out into the aisles to watch the film and engage in the discussion.

CAMPUSPEAK teamed up with HazingPrevention.org to host the early screenings of the movie, which stars James Franco and Nick Jonas, at five campuses across the United States, starting with the University of Maryland.

“This film really explores how quickly things can get out of control,” said Shelly Brown Dobek, who facilitated the talk and is the director of fraternity and sorority life at North Carolina State. “What tends to happen with hazing is a kind of snowball effect, where we start with something one year and the next year we up that. It’s important to evaluate those traditions and decide how we move forward.”

Fifty-three percent of students in attendance said hazing occurs because it brings groups closer together. Another 28 percent said it keeps traditions intact.

“It’s a very slippery slope,” said Emily Pualwan, HazingPrevention.org executive director. “The worst case scenario — which is a student’s death — nobody could’ve predicted it, right? They thought it was all fun and games until it wasn’t.”

Hazing can happen in any group, not just Greek life, said Luke Davis, the CEO of CAMPUSPEAK. Sports teams, honor societies, marching bands or any other campus group are all susceptible, Davis said. More than half of college students involved in clubs, teams and organizations experience some form of hazing, according to the University of Maine study.

The same study found that 95 percent of students who were aware that they were hazed did not report it.

“We’ll see students who put up with things that they never would in other circumstances because they really want to belong,” Pualwan said.

While there is still a culture of hazing in many groups and organizations in campuses across the country, Pualwan said there’s a strong shift toward intolerance of the practice.

“People are more aware of it, more willing to report it, schools are getting litigated, students are standing up and saying this is wrong, and the media is reporting on it all across the board,” Pualwan said.

There is currently no central database collecting the prevalence of hazing incidents, Pualwan said.

Andrea Goodwin, the Office of Student Conduct director, said this university’s hazing reports have “been all over the place.” In the past decade, there have been some years with no investigations or reports of hazing, while in other years there have been as many as 14, Goodwin said.

This university has created the Hazing Prevention Steering Committee and hosts events throughout the year to educate students about hazing and their options for coming forward, Goodwin said.

Students can report hazing incidents to the Office of Student Conduct or to the University of Maryland Police. They can also seek help from mental health professionals from the University Counseling Center or at the University Health Center.

Davis said he’s seen a lot of enthusiasm from college campuses to promote awareness of hazing, and that students have been “very, very responsive.”

“It was really exciting to see so many people come out and actually think about these things,” said Nicole Diaz, the Office of Student Conduct graduate assistant. “It was a really hard movie to watch, but on that same token I think that’s what makes hazing so hard to talk about. It’s so important to actually sit through and think these things through.”