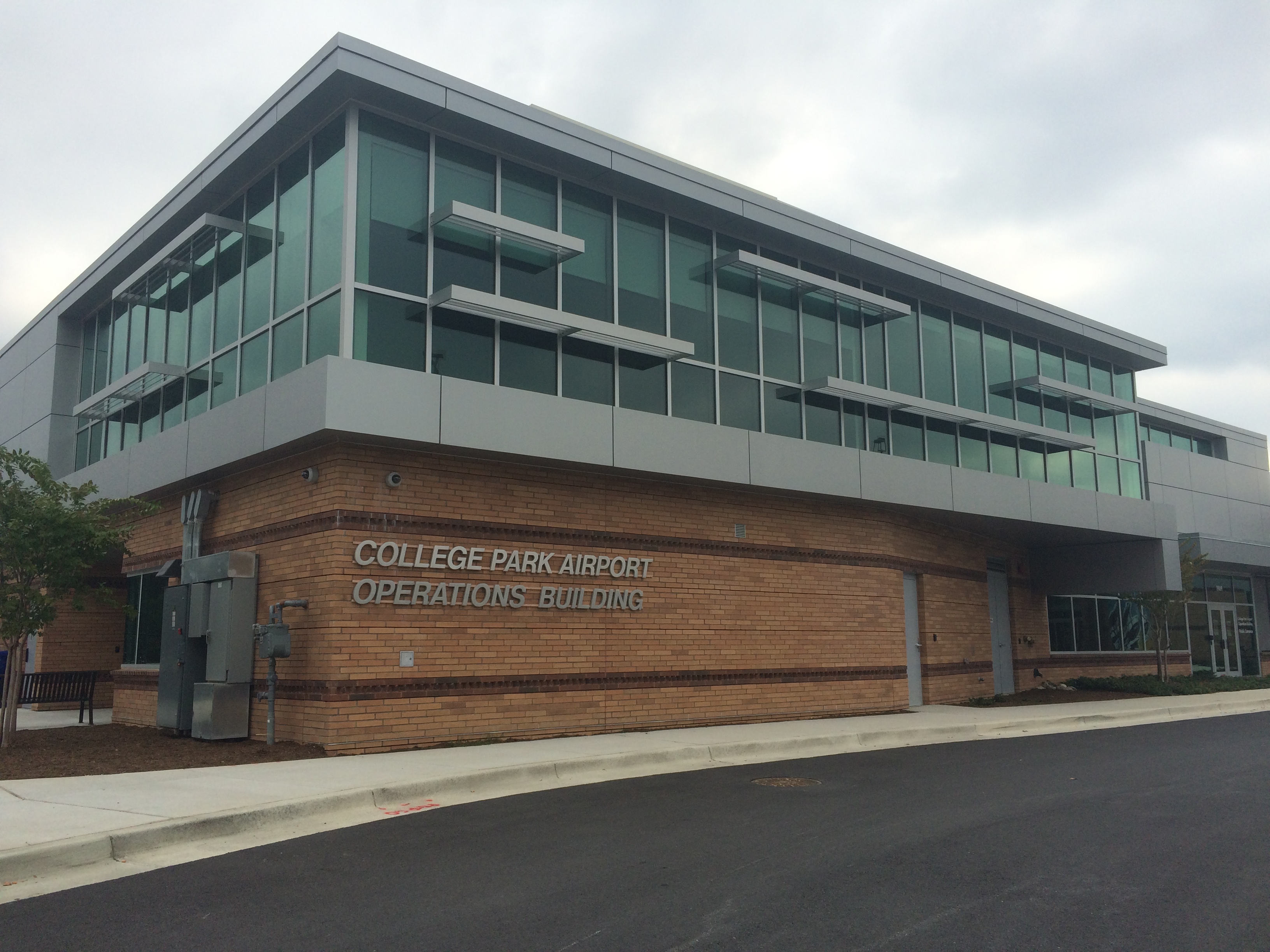 It’s known as the “Field of Firsts” because of its place in aviation history, and this month the College Park Airport added to its list of accomplishments.

The oldest continuously operating airport in the world opened a new 12,000-square-foot operations building Sept. 9 after it took on airport operations in late July. Construction on the building, which includes a pilot lounge, conference rooms and a hangar, began in September 2014.

The previous operations building, a mobile trailer, was supposed to have been temporary, but it was used for decades, said the College Park Aviation Museum’s Director Andrea Cochrane Tracey. Plans to build the new building began eight years ago, she said.

“It’s a really great space, and it’s a very significant site not only in terms of the history of the College Park area, but for the nation, in terms of aviation, so we just want to make sure people feel welcome and have a chance to check it out,” she said.

Visitors were able to tour the new building, explore the College Park Aviation Museum free of charge and meet with local pilots and crews on Saturday as part of College Park Day, an annual event featuring more than 150 exhibitors, performers, community groups, food trucks and small businesses, according to the event’s website.

Lieutenant Colonel Charles Davis, a group commander for the Maryland wing of the Civil Air Patrol who attended the event, said he was thankful for the new building.

“We had to have that trailer so you could appreciate this,” he said.

Senior Kevin Siroka, a pilot who works at the airport, said the operations building is attracting more attention to the airport.

Chelsea Dorman, the museum’s program coordinator, said the museum’s participation in College Park Day is a step in the right direction.

“We used to hold air shows here back before Sept. 11, and we haven’t been able to do anything like that, so this is kind of our first step towards being able to hold something on the field again,” Dorman said.

Crews from several area helicopters, including a Prince George’s County Police helicopter, a MedStar Health medical transport helicopter and an Air Force helicopter, were on hand with their helicopters to talk with visitors.

“It’s just nice to see the people come out and how many people are interested in the helicopters and what we do,” said Jack Hogan, a flight nurse who works aboard the MedStar helicopter. “It’s a different change of pace from taking care of patients.”

Air Force pilot Joe Ritt, from Andrews Air Force Base, said the event offered him a unique opportunity to share his experience with the community.

“Most of the places where really any aircraft is are behind closed gates,” he said, “which can be a hindrance when you’re trying to get people involved and motivate people to maybe join that same career field one day.”

Students from the University of Maryland’s aerospace engineering department also attended the event. They demonstrated their mini-aircrafts in the building’s new innovations hangar, including a cyclo-copter, a technology unique to this university.

“We have a ton of vehicles, and it’s really great to come out here and show the public what we do, and how awesome drone technology is,” said Brian Davis, a junior aerospace engineering major.

Aerospace engineering department chair Norman Wereley said the department plans to continue to work with the airport in the future.

“We’re trying to work with the museum to do more activities, community outreach activities, things like K-12 STEM education,” he said.

Hyattsville residents Matt Baker and Audrey Tombo said they were happy to meet the pilots of the Prince George’s County Police Department’s helicopter, since they often see it flying above their home. Cochrane Tracey said this was a major purpose for holding the event.

“I am thrilled beyond belief, because, you know, this is the chance for the public to learn about what’s flying overhead,” she said.

The event was about sharing their passions for aviation with children of the community, Cochrane Tracey added.

“You never know what that little spark is going to be for some young person,” she said. “This is what we’re all about,”

“The kids are why we do this,” Ritt said. “Every toddler who hops in here wants to be a helicopter pilot someday, I imagine.”