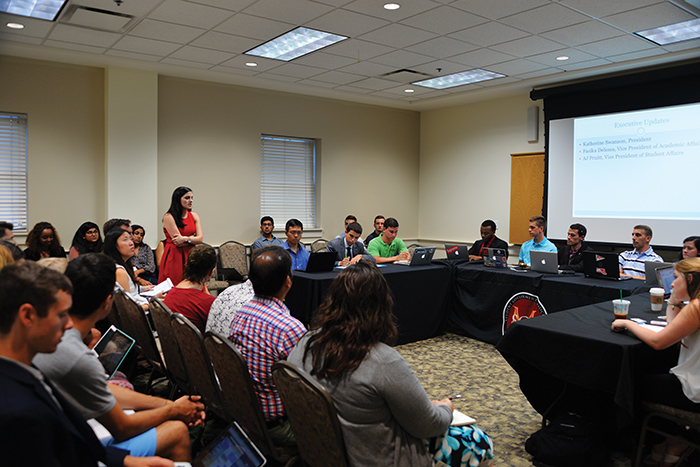 Full time undergraduates could pay $40 more to the Division of Information Technology next year if a proposed fee increase unveiled at a town hall Tuesday night is approved.

That increase is the largest among seven possible hikes addressed before a crowd of about 30 during the Student Government Association’s “What the Fee?” event in the Reckord Armory. The second largest is a new, $34 fee for the Office of Civil Rights and Sexual Misconduct.

SGA Student Affairs Vice President A.J. Pruitt, who spoke at the event with President Katherine Swanson, submitted a proposal for the Title IX fee two weeks ago. The fee would generate $998,563 in fiscal 2018 for an office the SGA says has been understaffed and underfunded since its inception in 2014.

The fees apply to full-time undergraduate and graduate students and cover the full academic year. Part-time students would pay less, Swanson said, and full details will be made available on the SGA website.

The fees would also allow for a new staff member to handle fundraising and grant writing for the Nyumburu Cultural Center; a new Stamp policy allowing registered student groups $100 in free printing; and a full time CARE To Stop Domestic Violence advocate for the Health Center, Swanson said. This salary was previously covered by state and federal grants that are now running out.

Of the proposed IT fee increase, $10 would go toward fixing the Wi-Fi system, while $30 would contribute to security enhancements that would help prevent hacking, Swanson said.

Offices that collect fees had to submit increase proposals by Sept. 19. These proposals are then checked by the Office of Administration and Finance and university counsel.

After that, a committee including Swanson, Pruitt, SGA Vice President of Financial Affairs Perry Bloch and Academic Affairs Vice President Fasika Delessa — as well as officials from the University Senate, Residence Hall Association, Graduate Student Government and faculty — votes on the fee proposals.

If approved, they pass the recommendation to university President Wallace Loh’s cabinet, and then to Loh, who submits his final proposals for review to the Board of Regents, Swanson said.

Most student concerns raised at the town hall were about the Title IX fee proposal.

Katie Dolan, SGA public health school representative, asked whether the governing body had communicated enough with university administrators about their expectations for the fee.

“If this hasn’t been communicated at all, that, once they see that this is the step that we are taking to properly fund the office, that there might be some backlash,” the junior behavioral and community health major said.

Pruitt said he’s seen two Diamondback editorial boards call for the university to “take a bigger role in ensuring that this office is fully funded,” but every year, the funding gap remains.

“This was the path that we could ensure that we didn’t go a whole other year without the office being fully funded,” said Pruitt, a junior government and politics and economics major. “It should not be a long-term solution.”

Others raised questions about the athletics fee, the university’s highest at $406 per year for full time undergraduates, according to university documents. There is no proposal calling for that fee to go up.

“We’re exploring … how we go about either bringing this fee down or having people opt out of it, because … we all think it’s way too high,” Swanson said of the athletic fee.

Swanson said her administration is meeting with the athletics department Thursday to discuss the issue.

“Fees are something that take time, especially taking them away or letting people opt out of them, but it’s something we’re completely aware of,” she said.

Swanson said she recognized the fee’s steep cost, and that her administration is exploring options.

Junior government and politics major Sam Koralnik expressed concern about the Student Activities Fee, most of which is directly administered by the SGA. It will also not increase this year.

Swanson said the SGA plans to increase transparency in that and other areas.

“As far as transparency goes, I think that our organization has a lot of things we could do,” Swanson said. “That’s part of the reason we’re here right now, because we’re trying to be transparent.”