It’s hard to become Testudo. I know. I tried out. 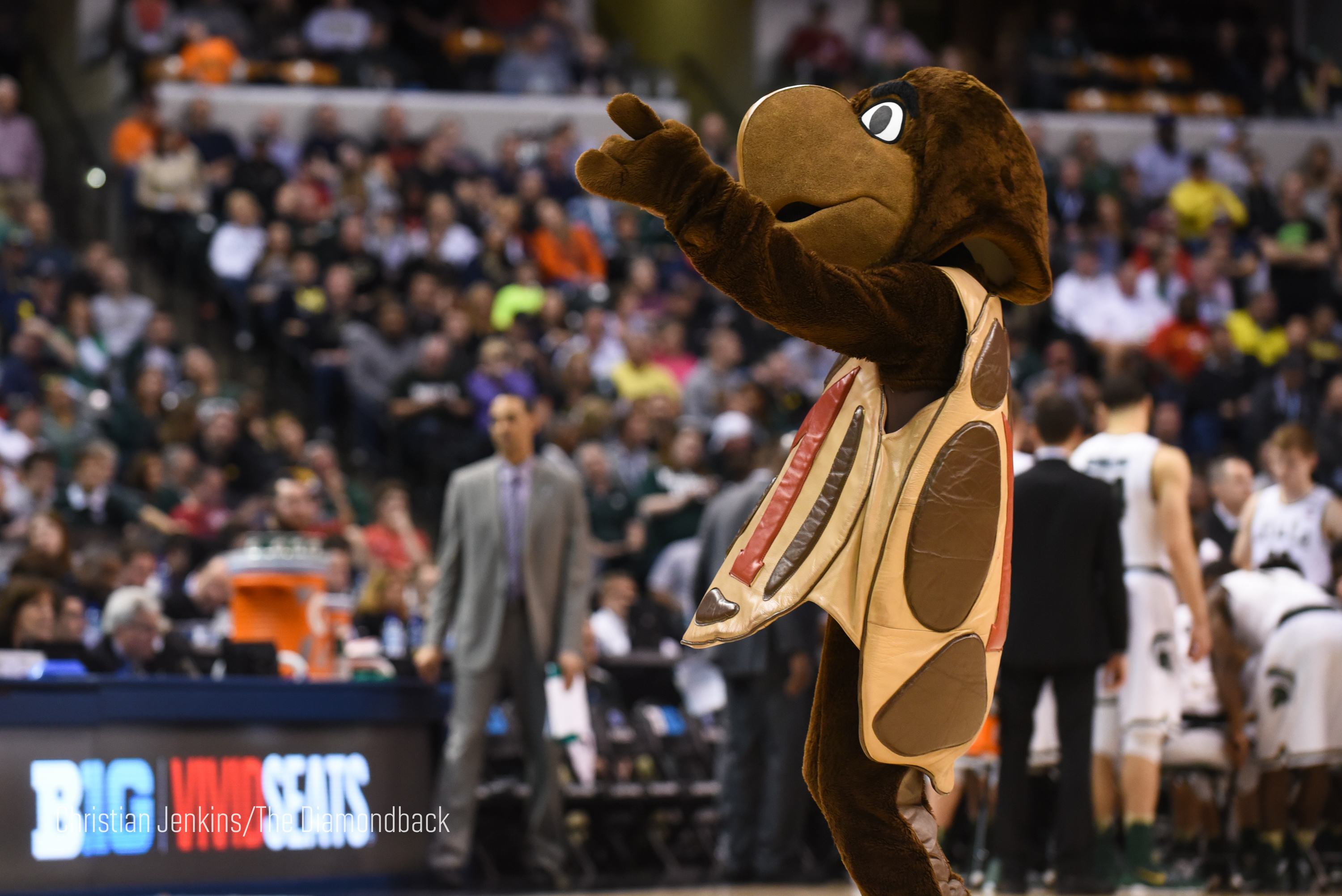 Testudo cheers during a time out when the Terps lost to Michigan State, 64-61, in the Big Ten semifinals at Bankers Life Fieldhouse in Indianapolis on Mar. 12, 2016. (Christian Jenkins/The Diamondback)

On Sunday, Sept. 25, myself and seven other freshmen and sophomores at the University of Maryland were given a unique opportunity: a chance to try out to be Testudo. Here’s what I went through trying to be Maryland’s iconic and beloved mascot.

I had to fill out about five pounds of paperwork

Before I could even come close to trying out for Testudo, I first needed to prove I was in good enough physical shape to try out for the position. I had to fill out 29 pages of forms detailing everything that could have been a possible concern medically. I did not expect that being a mascot required that much information.

Filling out the forms, I had to provide the last time I went to the dentist and offered a thorough description of my diet. I had to show proof that a physician cleared me for participation in intercollegiate athletics. Additionally, I needed to get my blood tested to prove I did not have sickle cell disease. Also, women had to provide information on their menstruation.

Trying out for Testudo requires the same amount of medical information as trying out for basketball, football or any other sport Maryland offers scholarships for.

The first step of the tryout was a 10-minute interview with a panel of current and retired Testudos. Going into the interview, I was mainly curious what questions they were planning to ask.

The most interesting (or terrifying) part of the interview was when they randomly stopped the questions, put on Hotline Bling and unexpectedly required me to dance for about 45 seconds. The random dancing was both a good way to see how someone would handle a surprising scenario and a chance to evaluate their dancing skills. I do not remember what dance moves I did, but I can assure you that they were terrible.

From what I could tell, the main point of the interview was not necessarily hearing your actual answers, but seeing how quickly you could respond to their questions. A quick, funny retort seemed to be more important than a lengthy but thought out answer that took 15 seconds to think of.

There’s some secrets to the costume

After the interview was done, it was time for the moment everyone was waiting for: actually trying on the Testudo costume.

Before we put it on, the professionals taught us how to do it. The entire costume consisted of a body suit with arms and legs, two feet, two gloves with four fingers, the head and of course the distinctive turtle shell with the block M.

One thing I found interesting was that Testudo’s head contains a bicycle helmet that you strap on to prevent your head from moving too much while you wear it. Also, Testudo’s feet had Timberland boots inside of them to make it easier to walk around.

Nothing can prepare you for actually being Testudo

After being taught about the costume, it was time for everyone to try on the costume and show the panel if you had what it takes to actually be everyone’s favorite turtle.

The audition began with cueing up the song “Shell Shocked” and running in from the corner of the auxiliary gym to pump up the non-existent “crowd” that was there. From there they wanted to see me dance and just generally do whatever I thought would have been appropriate. I opted for lots of jumping around and random arm movements.

Following the initial grand entrance, the rest of the audition was a test of how fast I could think and how well I could deal with the unique challenges of the costume.

To test how fast I could think, I was told to grab two random props. I chose a sword and a giant cardboard credit card. I was then instructed to use them in a way they are not meant to be and decided to use the sword as a paintbrush and the credit card as a canvas.

For me, the toughest test that came with wearing the costume was catching and throwing back a frisbee. It sounds like a simple task, but when you are wearing gloves with only four fingers and a giant foam head that you can not see clearly out of, it becomes vastly tougher.

Overall, I found dressing up as Testudo and acting out the various scenarios to be amusing. I did not do a good job with anyone of them, but I had fun acting them out and did it with a smile.

Being Testudo seems like a great experience, but I’m simply not cut out for it

From both the try outs and getting to know some of the people who have been Testudo, it is clear that not everyone can be Testudo.

Being Testudo requires someone who is in great physical shape with tons of energy and an ability to always find new and creative ways to entertain and pump up the crowd at Maryland’s sporting events.

That person is not really me, but I have no doubt after going through the process that anyone who gets a chance to be Testudo is 100 percent qualified for it.