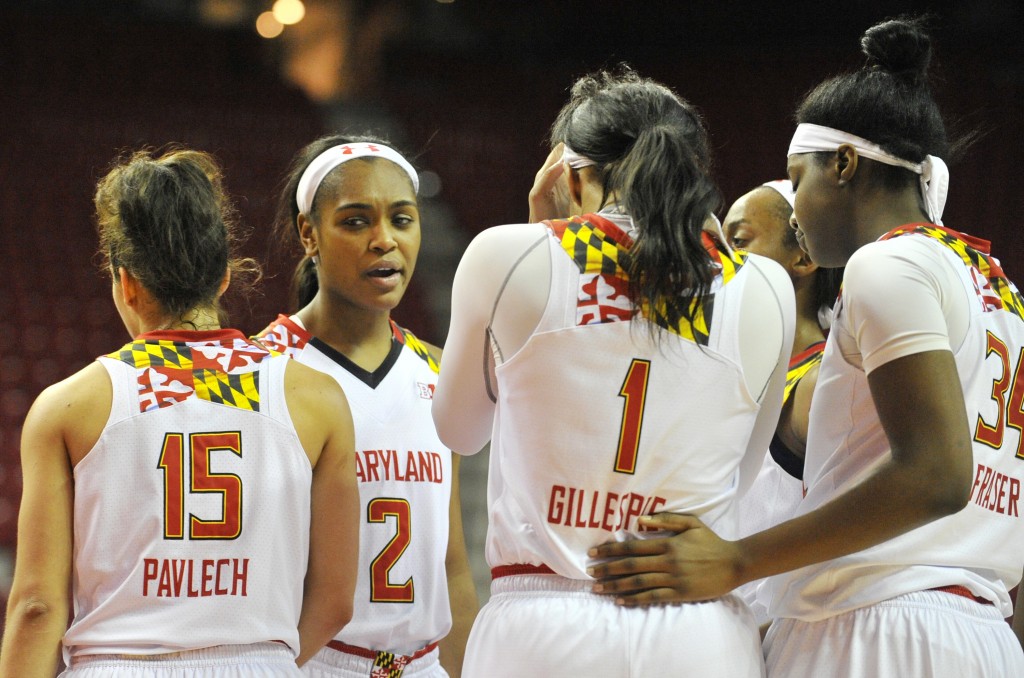 The Maryland women’s basketball team held its first official practice of the season Tuesday, but the predominant feeling among the squad was familiarity.

The Terps have seven new players on their roster, but thanks to extensive summer practices and an eight-day trip to Italy, the team was already well-acquainted entering Tuesday.

“This dynamic this year is a little different than most first practices,” coach Brenda Frese said. “We’ve had so many practices under our belt.”

Six freshmen are entering the program in addition to redshirt junior Ieshia Small, who is eligible for 2016 after transferring from Baylor and sitting out last year. Half of the team’s 14-player roster will be new.

At the beginning of August, the team — including the freshmen — took an eight-day trip to Italy that included playing two games against European teams.

Senior guard Shatori Walker-Kimbrough thought the experience gained in those exhibitions was secondary to the bonding the team went through away from the hardwood.

“Anytime we get to build a chemistry, whether it’s on the court or off the court, it’s always a positive,” Walker-Kimbrough said. “That chemistry off the court is what’s important. I think that’s what some people don’t really acknowledge as much.”

Slocum, a five-star recruit who Frese said will start at point guard, felt the trip was especially important for her to get to know the rest of her freshman class.

Tuesday’s practice, though, showed how far the Terps advanced on the court during the break.

“When I match up from last year to where we are now, it’s incredible,” Frese said. “And we only had two freshmen last year.”

Rather than spending its first practice installing base offenses and defenses, the team focused on polishing things they’d already learned. The Terps also began learning how to execute its press defense during the practice.

“It’s a huge advantage for us,” Frese said.

For Slocum, not even the press felt different. She said her previous team ran the “same exact” scheme that Frese was implementing.

But the Meridian, Idaho, native likely wasn’t too accustomed to running defenses against WNBA players.

Indiana Fever forward and Maryland alumna Lynetta Kizer was on the scout team for the team’s first practice, alongside former Terp Malina Howard, who graduated last year. The team said having alumni such as Kizer and Howard come back for practices was invaluable.

“I’m trying to get where [Kizer’s] at right now,” Walker-Kimbrough said. “Even her little things. She may not notice it, but we soak it in like sponges.”

Frese said Kizer may come back for future practices, as well, until she flies overseas to play in Europe. The Greek team Olympiacos Pireus signed Kizer in July, according to eurobasket.com. While Kizer is in College Park, the Terps will try to learn as much as they can from the five-year WNBA veteran though she never reached a Final Four during her career at Maryland.

This year’s team, with its No. 1 ranked freshman class and an All-American senior in Walker-Kimbrough, thinks it has a chance to do that.

“Rather than starting off from a beginning part, [like] we had in the summer, we get to start off [and] we know our stuff,” Slocum said.