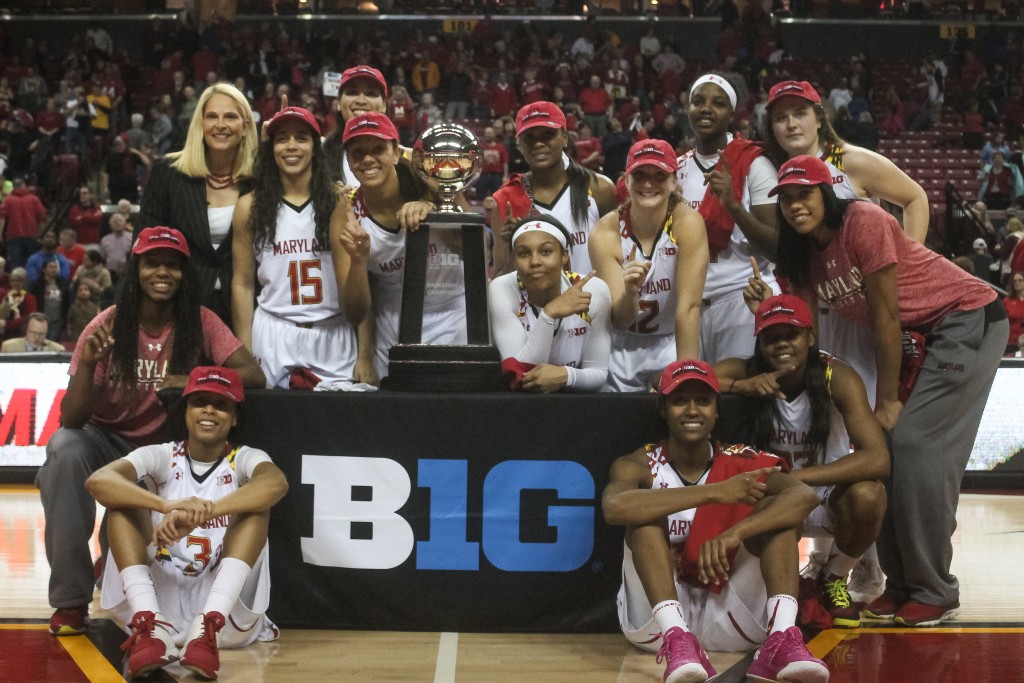 Jones’ expectations did not fully prepare all of the first-year players.

“It was bigger than what I expected,” freshman Sarah Myers said. “It was awesome.”

The moment wasn’t too big for Myers, though. She paired with Terps men’s basketball guard Jaylen Brantley to win the three-point contest.

“I got lucky to be with Jaylen, he was knocking them down,” Myers said. “It was hard without warming up.”

Myers and Brantley beat the team of guards Shatori Walker-Kimbrough and Kevin Huerter in the final round.

The team made its intrasquad look like a three-point contest, with the Red and White teams combining to hit five threes and take many plenty more in the five-minute scrimmage.

Guard Kristen Confroy made two of them to lead her Red team to a 14-13 win. Jones pitched in six points for the White team.

After the event, neither coach Brenda Frese nor Jones could believe it was her and Walker-Kimbrough’s final Madness.

“It’s surreal, it’s the last one,” Jones said. “I’m a little sad that we didn’t get to dance, but it’s okay. I still had a great time and I hope all the fans had a great time.”

The freshman, meanwhile, just had fun at their first edition of the event. Guard Kaila Charles showed off some moves as she was introduced to the Maryland crowd.

She was just doing what her coach had told her to do.

Frese, who received a standing ovation as she walked onto the court with her two sons, said the excitement of Maryland Madness never goes away.

It may be her 15th year as the head coach, but she still enjoys the night’s atmosphere. And she makes sure those around her, whether it’s their first or last Maryland Madness as a player, do the same.

“It never gets old,” she said. “It’s the first step as we begin this journey. It’s always a fun night.”