Police are more likely to use force against black people. A UMD professor wants change. 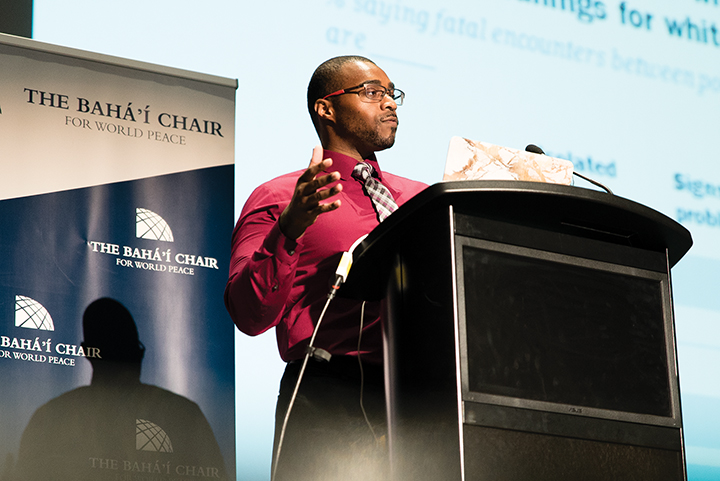 University assistant sociology professor Rashawn Ray speaks with students about structural racism in the United States as part of a series conducted by the Baha’i Chair for World Peace (Ryan Eskalis/For the Diamondback).

In recent years, the killings of unarmed, black men by police have dominated the news, touching on conversations about how race factors into the way people are treated by law enforcement.

The University of Maryland held a discussion Tuesday, “Why Police Compliance Does Not Save Black Lives: Racial Bias and the Need to Restructure the U.S. Criminal Justice System,” that aimed to dive into that issue.

The event, which was held in Hoff Theater at Stamp Student Union, was organized by the Baha’i Chair for World Peace and co-sponsored by the sociology department’s Critical Race Initiative. About 100 students attended.

Sociology professor Rashawn Ray led the talk and detailed how police around the country are more likely to stop, search and use force against black men and women, compared to white citizens.

He began his presentation by showing videos of recent instances of police brutality against black people.

“It becomes important to juxtapose the treatment of one group versus another group,” Ray said.

Ray presented statistics from the Pew Research Center showing that 79 percent of black people saw fatal encounters with police to be indicative of a broader problem. Just 18 percent viewed them as isolated incidents.

In contrast, 44 percent of white people said they believed the incidents were isolated and 54 percent believed they were signs of a larger problem.

“Since the early 2000s, we’ve seen a huge increase in justifiable homicides,” said Ray, adding that this is one of the primary reasons for the shootings of blacks by police.

A justifiable homicide is when a police officer is determined to have had probable cause and justification for killing a person they encountered, Ray said.

FBI data also shows black people are more likely to be killed by police compared to white and Hispanics/Latinos. They were also more likely than whites to not be attacking the police officers during these incidents. This is based on a sociological phenomenon, Ray said, in which people claim they have probable cause to take action based on suspicion or fear.

“[This] allows officers to stop citizens if they think there is suspicious behavior occurring,” he said.

He said these feelings led to the implementation of stop-and-frisk laws around the country, which gave police the right to stop and search people officers found suspicious.

New York Police Department data from 2011 showed 51 percent of people in New York who were stopped were black, as opposed to 33 percent who were Hispanic/Latino and 9 percent who were white.The data also showed that 2 percent of all stop-and-frisk encounters by police were successful in finding contraband or other illegal materials.

In 2013, a federal district court judge ruled that the way the controversial practice was enforced was unconstitutional as it was racially discriminatory. Ray said unequal treatment by authorities based on race “starts very young for blacks,” referencing data that showed large numbers of black children are suspended from preschools compared to other races.

Ray ended his discussion by proposing changes to the American justice system, which he said would help to limit fatal encounters between police and blacks.

He said fear should not be considered a justifiable defense by police who use excessive and/or lethal force, stop-and-frisk laws should be repealed and all police officers should be required to wear body cameras, as University Police are.

“I know that there’s implicit bias and racism in America, in the way that our society is structured and how people treat each other, but it’s so hard to argue [against it],” said Dave Brotman, a graduate student studying real estate development. “We can do something about [implicit racism]. … [In terms of] tearing down the structural racism of the criminal justice system.”

Professor Hoda Mahmoudi, who holds the Baha’i Chair for World Peace at this university, said the purpose of this event was to “examine [the] barriers of a peaceful society … and one of those is racism.”