University of Maryland students are working to get collective bargaining rights 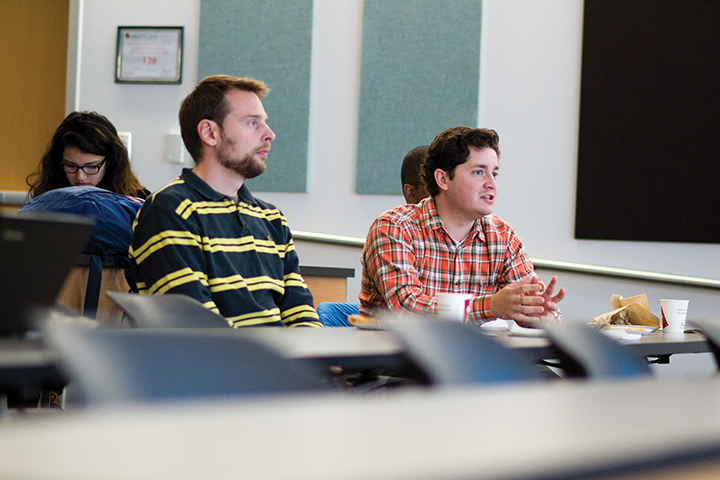 University graduate students met in Tawes Oct. 26 to discuss how the graduate school should be run. The forum was led by Adria Schwarber, a graduate student in the department of atmospheric and oceanic science (Joe Duffy/For the Diamondback).

In the wake of a recent ruling granting graduate assistants at private universities employee status, University of Maryland students are teaming up to revitalize efforts to gain collective bargaining rights.

Representatives from different groups on the campus, including the Graduate Student Government, Student Government Association and the Student Labor Action Project, have formed a coalition called Fearless Student Employees to garner support for collective bargaining rights, which allow workers to negotiate wages or other terms of employment, for student employees.

The GSG passed a resolution Friday that calls for the Maryland Senate to recognize graduate assistants and other student employees as formal employees with collective bargaining rights.

This university considers graduate assistants as students, not employees; therefore, they are not entitled to collective bargaining and unionization rights. However, the National Labor Relations Board’s 3-1 decision on Aug. 23 has re-opened conversations about graduate students’ employee status in campuses across the country.

“This is happening all across the nation,” said Caden Fabbi, a public policy graduate student. “It would be good for Maryland to get ahead of it instead of kicking the can down the road.”

The last major push for collective bargaining rights at this university was in 2012, when the state Senate considered a bill to grant graduate assistants the right to unionize.

However, University System of Maryland officials and former Gov. Martin O’Malley’s office negotiated a meet-and-confer process instead, which guaranteed graduate students periodic meetings with the administration but no negotiations about working conditions. The Graduate Assistant Advisory Committee meets with university administration officials once per semester to fulfill these requirements.

This latest effort by graduate students to gain employee status is different from past attempts because it includes the support of undergraduate students as well, said Katie Brown, a communication doctoral student and the vice president of public relations for the GSG.

“One of the things that’s most exciting about this coalition is to see graduates and undergraduates come together,” Brown said. “We’re talking thousands of people.”

Among the coalition’s top complaints is the failure of the meet-and-confer process to make progress on key issues important to graduate students, such as intellectual property rights, stipends, unclear expectations and family leave, Brown said.

Despite the perceived lack of progress, this university has had some successes with its meet-and-confer process. Recently, the GAAC worked with the administration to waive the enrollment fee for the Terp Payment Plan, which allows students to pay their enrollment fees in installments throughout the semester, Brown said. However, this was only a “drop in the bucket of what should be acknowledged,” she added.

“A lot of the issues that are brought up by [GAAC] are kind of brushed off or aren’t taken seriously,” Fabbi said. “If we had collective bargaining, we’d be able to define contractually obligated things that need to happen.”

Currently, the coalition is focusing on getting people involved, sharing students’ working experiences and raising awareness about the issue, Brown said. Although the grassroots movement is still in its infancy, the coalition has already begun to rally support for its cause. The group launched a Tumblr page to collect stories from student workers, and several have come forward with their experiences.

“Our hope that we have is that we can try and convince the university administration and leadership in the state Senate that this is something that’s necessary to keep us competitive with the Big Ten schools,” said Mihir Khetarpal, SGA director of governmental affairs and liaison for the coalition.

In addition to boosting this university’s competitiveness with other schools, collective bargaining rights could also improve student-advisor relationships, Fabbi added. Graduate students who are allowed to unionize report better personal and professional relationships with their advisors when compared to graduate students who are not allowed to unionize, according to a 2014 Cornell University study.