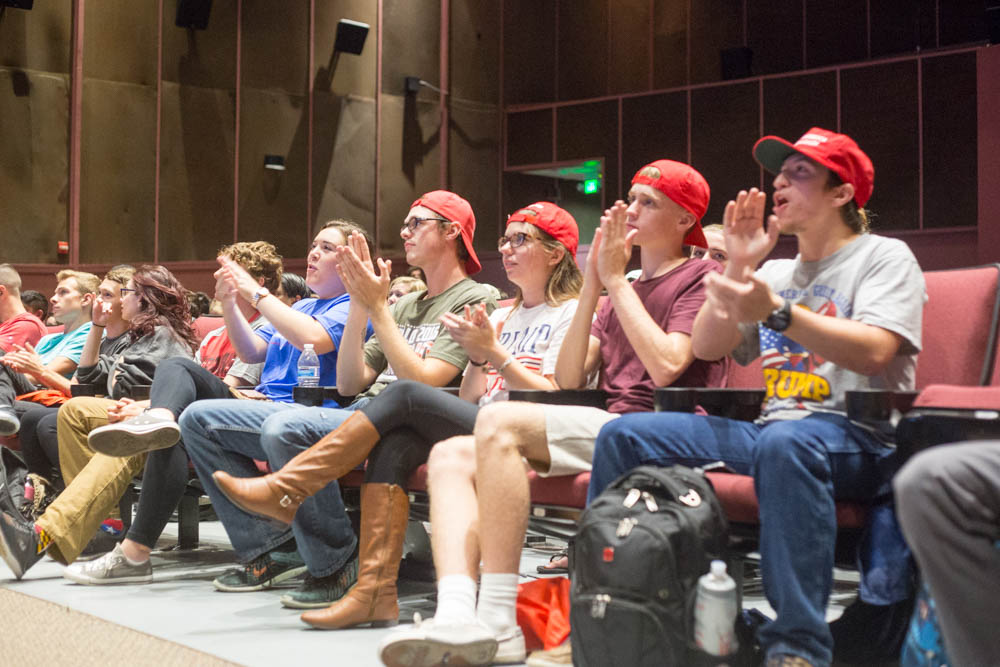 When Shane Havens walked back to his car from class before the election, he found someone had blacked out his President Trump bumper sticker with marker. On more than one other occasion, there was a note waiting on his windshield criticizing Trump.

And although Havens, a senior accounting major, proudly wore his “Make America Great Again” hat to class the day after the election, he received dirty looks from his classmates. He hasn’t worn it on the University of Maryland campus since.

One month after President Trump’s inauguration, near-daily protests continue to erupt across the nation in response to his administration and executive orders. Despite claims that Trump’s victory has emboldened his supporters, the strong backlash against his policies has left some students at the University of Maryland feeling shut out of political discussion and fearful of hostile reactions from other students.

“It’s definitely taboo to talk about it,” Havens said. “You definitely feel intimidated to speak publicly about it. … I’m all about encouraging free speech and open discussion about things. I think that’s something our campus might be lacking right now.”

[Read More: After this election, stay united and engaged]

The day after the election, more than 300 students converged on McKeldin Mall to show support for marginalized communities who felt affected by Trump’s victory. Since his inauguration, Trump has signed a spate of contentious executive orders — including a 90-day immigration ban on seven Muslim-majority countries, a directive to begin scaling back parts of the Affordable Care Act and a stop on government funding to international organizations that provide abortions — that have intensified political tension and spurred students to participate in marches and protests in Washington and on the campus. New student groups such as Muslim Political Alliance, a group aiming to give Muslim students a political voice, have also started cropping up in response to the shifting political landscape.

Christina O’Connell, a junior finance and accounting major, said she tends to keep her support for Trump private, citing her fear of losing friends on a more left-leaning campus.

Excluding provisional ballots, less than 15 percent of students voted for Trump in Ritchie Coliseum and Stamp Student Union on Nov. 8. Some of O’Connell’s more liberal friends have complained to her about Trump supporters on their Facebook feeds and asked anyone who voted for Trump to defriend them, O’Connell said.

Not being able to share her political views can be isolating, O’Connell said, adding Trump supporters may worry that other students will conflate their support for Trump with being a racist. On the campaign trail, Trump implied the federal judge presiding over a class action lawsuit against Trump University would be unable to stay unbiased because of his Mexican heritage, a statement Speaker of the House Paul Ryan claimed was a “textbook definition” of racism. Trump was also slow to disavow the Ku Klux Klan leader David Duke after an interview with CNN anchor Jake Tapper in February 2016.

“[It’s] a very hostile environment toward conservatives, and I think that that’s not really what being at a university is about,” O’Connell said. “It’s about learning about the world and learning other people’s viewpoints other than yourself. And if we as a university allow a culture where one viewpoint seriously outweighs the other and makes the other feel endangered … then I think we’ve endangered the whole part of the reason why our democracy works.”

Havens noted many of his professors continue to make jabs and constantly criticize the new president in class, which has become part of the culture on the campus, he said. Some professors even postponed exams and canceled classes in wake of Trump’s election.

[Read More: Some University of Maryland professors canceled classes and moved exams after the election]

In an email to students after the election, one professor, Alan Peel, said his decision to postpone an exam was not political, but rather necessary “given that the nation in which you currently reside decided last night to elect a president whose own words have painted him a moral and physical hazard to many of us.”

O’Connell said professors should instead be giving equal weight to a “whole slew of different” ideas and creating safe spaces where students can freely share their opinions.

“It is totally OK to disagree with each other,” O’Connell said. “But when it becomes somewhat of a hostile disagreement I think that’s when we’re entering a dangerous space.”

While Terps for Trump member Nicholas Zielinski said this campus is more tolerant than most, he added that he doesn’t publicize his views because of the stigma attached to them.

Violent riots involving about 150 masked protestors who threw smoke bombs and smashed barricades broke out on the University of California, Berkeley’s campus earlier this month before Milo Yiannopoulos, a conservative Breitbart editor, was set to speak. Yiannopoulos was also scheduled to speak at this university in October, but Terps for Trump failed to submit the proper paperwork by deadline and could not afford security costs for the event. The university had upped the security costs for that particular event on account of safety concerns.

Zielinski said he isn’t concerned as much about his safety as he is with people judging him for his views.

“You don’t want it getting in the way of anything else, like employment or friendships. It’s not worth it going around public when it could be an issue,” said Zielinski, a junior fire protection engineering major.

O’Connell said the lack of respect for opposing opinions is frustrating.

“President Loh espouses the fact that we have a fearless university,” O’Connell said. “I don’t understand how we can be building and growing fearless leaders if we all can’t support each other in our own viewpoints and endeavors.”