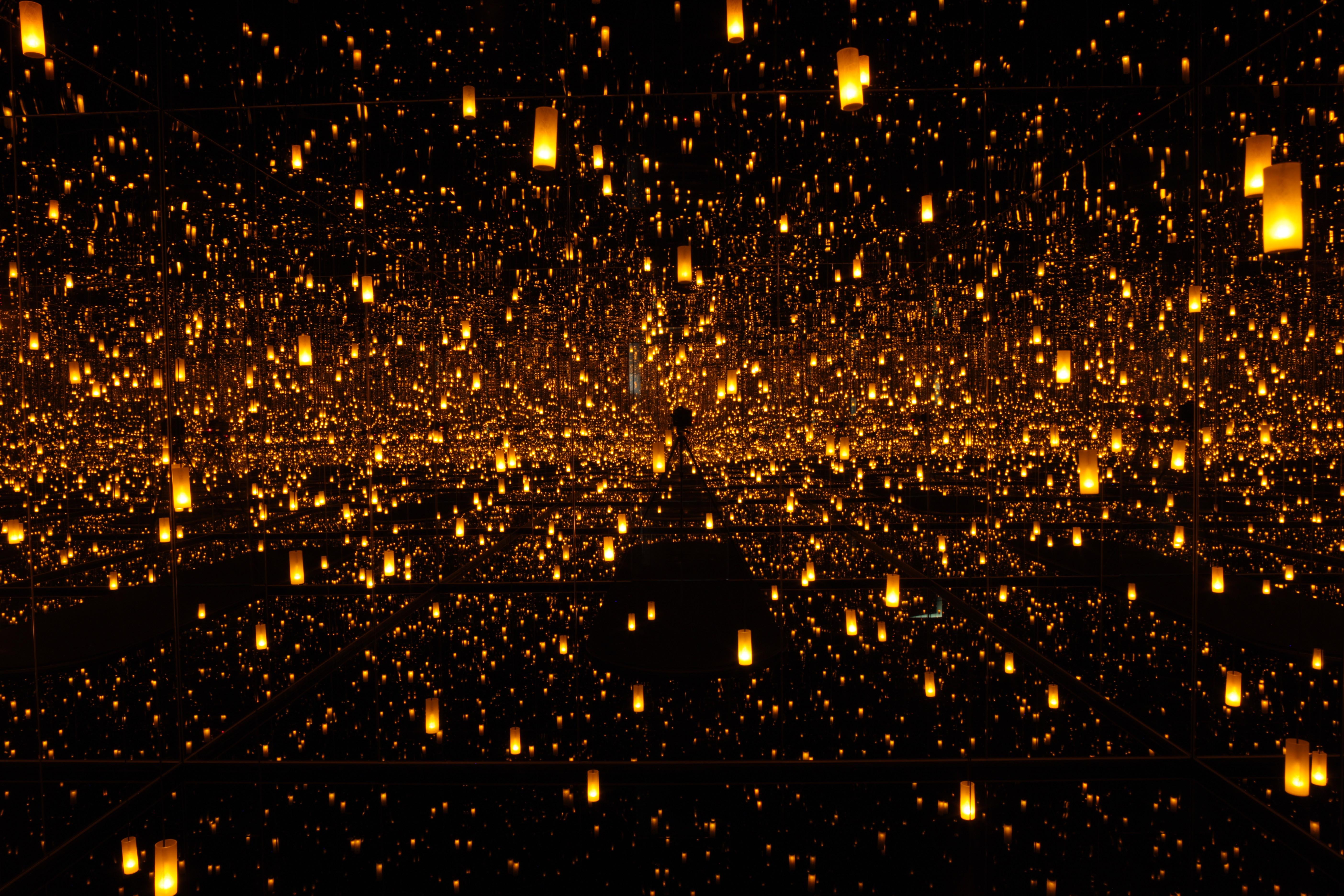 The only flaw of “Yayoi Kusama: Infinity Mirrors,” which opens Thursday at the Hirshhorn Museum and Sculpture Garden, is its setting.

So immersive, demanding and enthralling, the show does not do well to dwell within walls, no matter how white or how circular.

Beyond the explosive color palette that welcomely overloads the senses, the show’s interactivity demands more time than even the Hirshhorn can give it. Beyond the jarring, dichotomous themes that whiplash attentive viewers between male and female, light and dark or earthly and heavenly, the show’s immersion deserves a total separation no building can give to it.

These drastic interplays are organized with remarkable clarity such that one can, with care, follow the progression upward toward space, light and femininity as one imagines Kusama encountering the same within herself.

The first gallery presents an amuse-bouche of works on paper that feel maternal and are deeply tied to the earthen core of Kusama’s childhood on a Honshu plant nursery. The dulcet brown tones of the works combine with their intractable bodily shapes to create a grounded sense of solidity.

This evaporates as Kusama travels further and further into her mind, rejecting, per exhibition curator Mika Yoshitake, the Japanese painterly techniques she first learned for the surrealist methods and modernist tendencies she would come to wholeheartedly embrace.

“Violet Obsession,” a large purple rowboat with its image repeated on every surrounding surface, carries visitors over the proverbial Styx as she makes this transition. It also introduces the artist’s obsessive fear and use of phalluses.

Born out of childhood traumas in which Kusama’s mother told her to spy on her father while he had affairs, the artist’s phobia of sex, particularly in the male form, pervades most of her artwork once it is noticed.

Interestingly, though, it is the phalluses — the paternal works — that stay grounded and earth-tied while womb-like, maternal forms float above. This is a unique reversal of the Mother Earth trope that has informed such artistic dialogue since Uranus and Gaia.

In the first set of sculptures, shoes and other earthly talismans ground the objects as “phallic tubers” take them over. In 1974’s “A Snake,” the soft, stuffed appendages reach up like seedlings from a harrowed field.

In the first infinity mirror, “Phalli’s Field,” the forms have earned Kusama’s trademark polka dot patterning, but still rise from the floor like plants. The room, Kusama’s first, is mirrored to infinity on the edges, but has yet to adopt a reflective ceiling.

Visitors enter “Dots Obsession — Love Transformed into Dots” through a pair of pink spotted curtains and find an utterly womb-like environment within, where lit orbs hang from umbilical power cords and all is maternal in a very literal sense.

Soon, though, she searches deeper, using the warmth of candles and all they connote — home life, even death — in “Aftermath of Obliteration of Eternity.” The infinity room almost feels like a catacomb as its transmits maternity into Earth once more.

(In addition to the childhood traumas, Kusama suffers from mental illness and lives voluntarily in an institution near her Tokyo studio.)

In the confines of the mirrored room, all of these stories — if you cared to learn them — echo cacophonously, doubled by whatever insecurities about life, death, sex and personhood that enter with you.

With these ideas alone, the artwork is difficult. The shortcomings of the museum setting multiply this exponentially.

Beyond the core mental discussion, one is now faced with the self-consciousness of being alone in a box.

You count down the seconds of your allotted 60 ’til nearly half expire. You focus on how forcefully the door was closed long after its sound has stopped echoing. You contemplate the people behind you in line and the temperament of the guide who let you in. You arrange yourself when you perceive it’s nearly time to exit and, if God forbid you insist on capturing the moment for some undeserving internet posterity, you agonize over how to frame a selfie in a mirrored room with ever-changing light.

On the surface, perhaps, none of this needs to happen. It’s beautiful without context and people will throw it a like on Instagram no matter how deep you delve.

But far more satisfying is the process of considering, rectifying and silencing these thoughts — deep or incidental — to revel in the quietude that can result.

Strip away Kusama’s intentions and your own insecurities. Pare down the invading vestiges of the museum outside. Stop up your ears, steady your eyes and simply exist in the space until the little beep of a stopwatch, quiet knock and whoosh of a door mean you must leave it.

You still won’t want to depart, but at least you’ll have taken the time to glimpse the infinite.

“Yayoi Kusama: Infinity Mirrors” runs at the Hirshhorn Museum and Sculpture Garden through May 14, with free timed passes required.