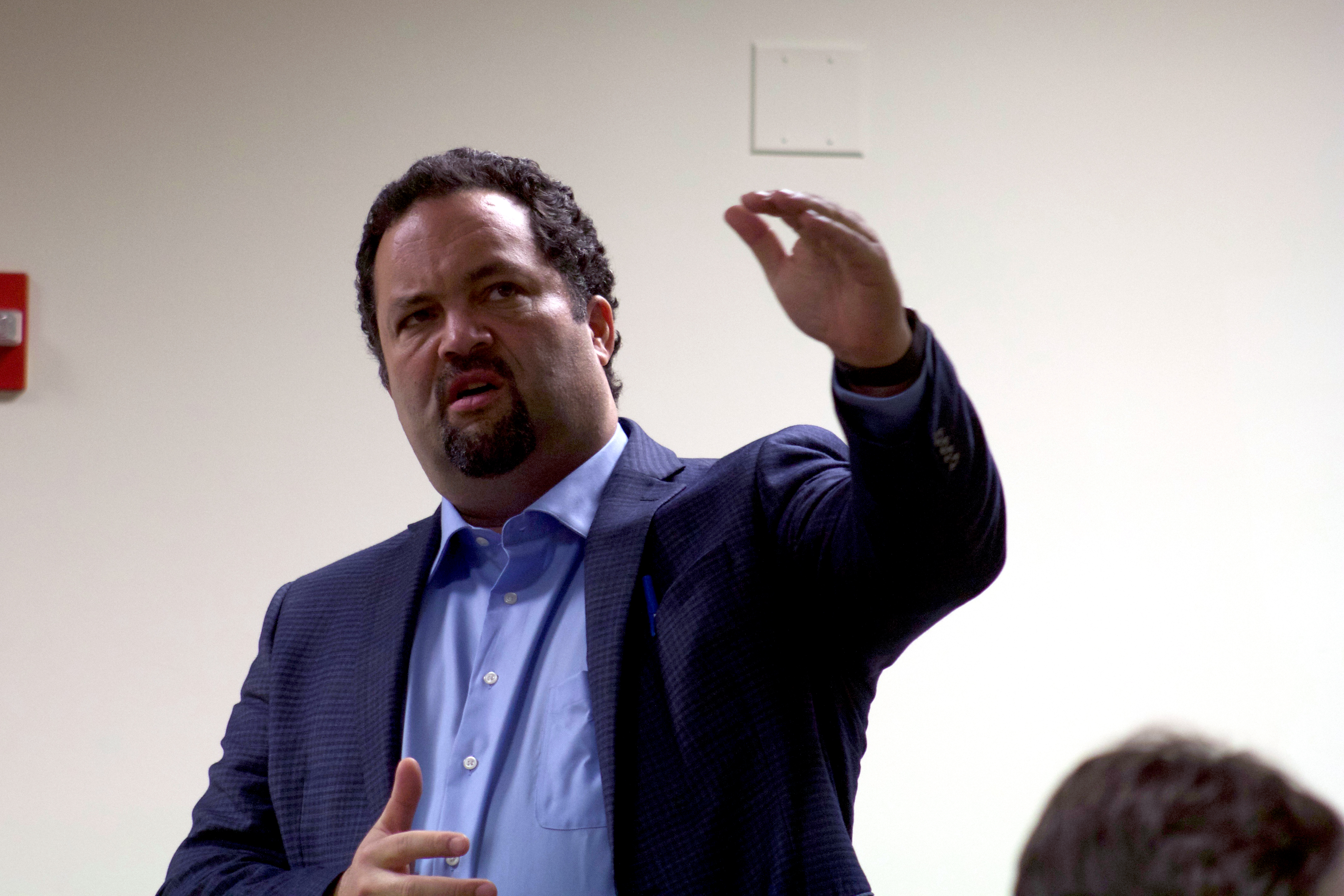 Former NAACP president Ben Jealous speaks at the discussion regarding the school to prison pipeline, and how it directly affects University of Maryland students. (Julia Lerner/The Diamondback)

The Prison Resistance Project and the University of Maryland’s NAACP chapter came together Tuesday night to mobilize students against this university’s relationship with Maryland Correctional Enterprises, the prison industry arm for the state’s correctional facilities.

About 40 people attended the groups’ town hall meeting in the Stamp Student Union, which began with a panel discussion with African-American studies professor Joseph Richardson, activist Che Bullock and Yanet Amanuel, activism chair for this university’s National Association for the Advancement of Colored People chapter.

“What this is an example of is people — businesses that clearly don’t have a conscience, because they are taking advantage of a legal apparatus, which allows them to enslave human beings,” said Nathan Brandli, Prison Resistance Project founder and the panel’s moderator. “It’s very obvious that they don’t care.”

MCE has worked with this university for more than 30 years, and sold an estimated $3.5 million worth of furniture to it in 2014. The NAACP former president, Ben Jealous, briefly attended the town hall, and asked students to question where their tuition money really goes.

“Tuitions are higher than they’ve ever been … and it’s literally tied to mass incarceration,” Jealous said.

The industry aims to teach inmates “the technical and ethical skills they need to obtain employment after they are released,” according to the MCE website. But those at Tuesday’s event say the industry leads to the “exploitation of inmates,” and want the university to divest from MCE.

“We recognize that the true aim of this [criminal justice] system is rooted in both the economic exploitation and the social control of varying groups …” said Brandli, a 2016 graduate of this university and an African-American studies department general associate.

ProtectUMD, a coalition of 25 student organizations, released a set of 64 demands for the administration last semester, including two related to divestment from MCE.

[Read More: ProtectUMD has 64 demands to aid vulnerable students. There are their stories.]

The University System of Maryland is required to purchase its furniture from MCE or other state socioeconomic preference programs, based on a state statute.

Panelists challenged the notion that the industry is rehabilitative, noting the inmates make less than minimum wage.

“I don’t agree with it being rehabilitative at all, primarily because the majority of the incarcerated population who work for the MCE basically are not getting trained in jobs where they lead to sustainable careers following their release,” Richardson said.

Bullock shared his story of spending 19 months in a Pennsylvania federal prison, where he said many of the inmates worked jobs similar to what MCE provides.

“I learned how to sell drugs better because I went to prison,” Bullock said. “These are not the type of skills you are supposed to be learning, but there was nothing else to do.”

There are more than 20,000 inmates in Maryland prisons, according to the Prison Policy Initiative. Black people are overrepresented in the state’s correctional facilities, making up 68 percent of those locked up, compared to their 28 percent representation in the state’s population, the initiative states.

“Maryland is just a symptom … of how the prison industrial complex affects African-Americans and poor people of color nationwide,” Richardson said.

Brandli said there are many factors on the university-level that are slowing down the intended outcome of their divestment campaign, particularly the state mandate requiring the university buy its furniture from MCE.

“We run into this barrier where people are unwilling to act,” Brandli said. “[The administration’s] excuse is that we can’t do anything, or it’s not even appropriate to discuss this issue in this context.”

The Prison Resistance Project has plans to begin a stickering campaign with the university’s NAACP chapter in hopes of furthering the campaign’s progress. Both organizations are urging students to sign a petition they intend to send to university President Wallace Loh.

“Maybe we can’t actually forego buying our products as a university,” Brandli said, “but at the very least, our university [could] come out and say, ‘We are opposed to this,’ and join with other institutions that want to pressure Annapolis to overturn this.”

CORRECTION: Due to a reporting error, a previous version of this story misquoted Nathan Brandli. He said the criminal justice system is rooted in economic exploitation, not the social justice system. The story has been updated.