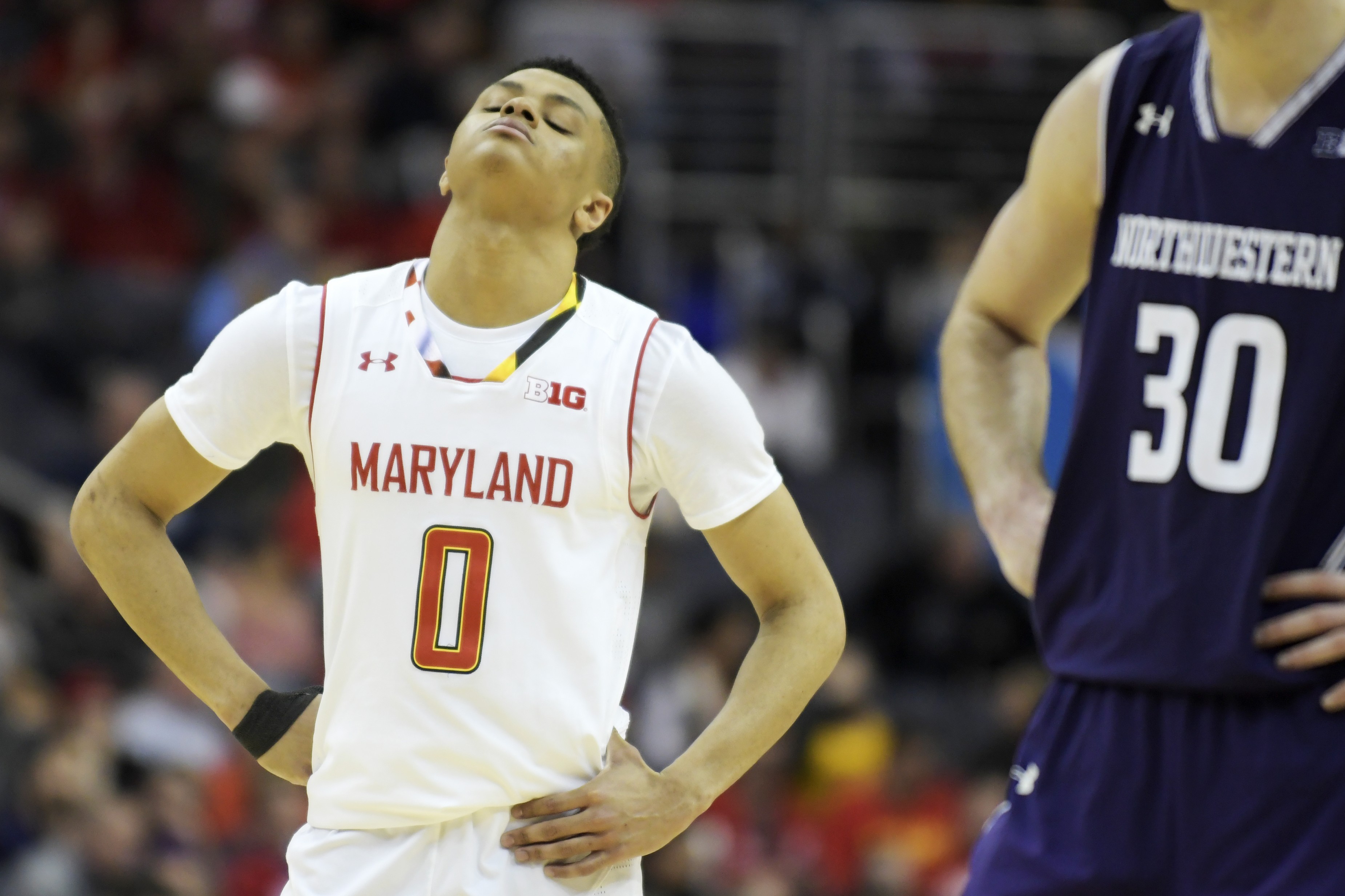 Maryland men’s basketball guard Kevin Huerter began the second half Friday by darting across the lane to put back forward Damonte Dodd’s missed free throw. A few possessions later, guard Anthony Cowan drilled a 3-pointer in front of the Terps’ bench. And just before the under-16 media timeout, guard Melo Trimble capped an 8-0 run with an and-one layup to ignite the Verizon Center crowd.

Behind the starting backcourt’s production, Maryland’s lead over Northwestern rose to double-digits.

But the Wildcats’ 20-2 run over the next nine-plus minutes doomed the Terps in a 72-64 defeat in the Big Ten tournament quarterfinals, overshadowing the trio’s offensive prowess. Trimble, Huerter and Cowan combined to score 52 of the team’s 64 points.

“They were terrific,” Dodd said. “[The Wildcats] were really standing in the paint, not trying to let us catch it or anything like that, so it opened it up for Melo and Kevin … on the perimeter. And they took full advantage of that and made shots.”

[Read more: Maryland men’s basketball was fired up after making the NCAA Tournament]

While Trimble led all scorers with 20 points, Huerter’s 19 points marked the second-highest scoring total of his career. Turgeon has praised the freshman’s defending and passing throughout the season, but Huerter made eight of his team-high 15 shots and hit three 3-pointers. He also grabbed four rebounds and tallied four dimes in 35 minutes.

Cowan, meanwhile, has been Maryland’s starting point guard for all 32 games, allowing Trimble to play off the ball. His driving ability has opened looks for teammates — he’s tied with Trimble for the team lead in assists (3.7 per game) — and he often defends the opposing team’s best backcourt player. The Bowie native also leads the Terps with 39 steals.

On Friday, Cowan dished two assists compared to five turnovers but gave his squad an offensive boost with 13 points on 4-of-9 shooting. While he’s shot 32.5 percent from behind the arc this season, he made each of his three triples against the Wildcats.

In the first half, Cowan, Huerter and Trimble helped Maryland overcome a 20-4 Northwestern run and enter the break with a two-point lead. With three Terps big men touting at least two personal fouls, the guard trio combined to score 28 of the team’s 36 opening-period points. Huerter paced the squad with 12 and drilled five of his eight shots.

Cowan and Huerter said the Terps focused on getting out in transition, a tactic that allowed Trimble to drive the lane before Northwestern set its defense and Huerter to spot up for open 3-pointers. And Trimble’s effective driving ability continued when Maryland ran its half-court set. In addition to dishing four assists, the first-team All-Big Ten performer went 6-for-8 from the line.

With about seven minutes to play and the shot clock winding down, Trimble drove right until three defenders collapsed on him. He kicked the ball out to a wide-open Cowan, who drilled his final long ball to bring Maryland within five.

“Melo did a good job of kicking out the ball,” Cowan said, “and we just had to be ready to shoot and make the shot.”

Maryland couldn’t erase the deficit, cutting it to three but not any closer. After securing a double bye, the Terps suffered their earliest conference tournament exit since joining the Big Ten in 2014.

Still, the starting backcourt turned in a promising performance entering the program’s third straight NCAA tournament appearance. Maryland earned a No. 6 seed in the West Region and will open up against 11th-seeded Xavier on Thursday in Orlando, Florida.

It’ll be another chance for the freshmen guards to prove their prowess on the postseason stage.