Maryland men’s basketball had the program’s best start ever. Then came the late skid. 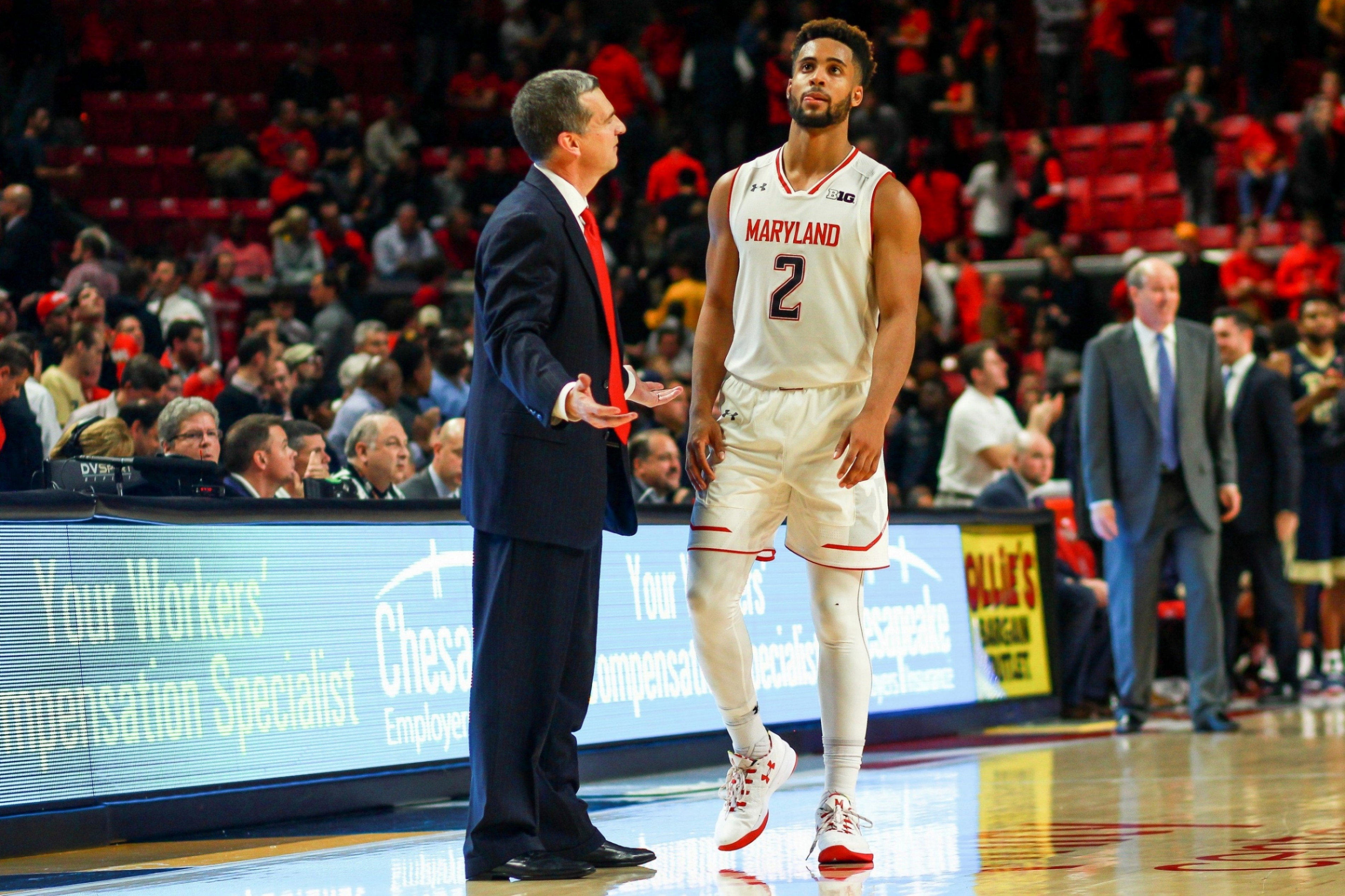 After Maryland men’s basketball lost four starters from last year’s first Sweet 16 squad since 2003, not many followers knew what to expect this season.

They gained some insight when the Associated Press released its preseason Top 25 on Oct. 31. Maryland claimed the final spot, leading its fans to believe coach Mark Turgeon’s bunch would make a third straight NCAA tournament.

The Terps made the Big Dance, falling in the first round to No. 11-seed Xavier, but it came after an uneven campaign. Maryland began a program-best 20-2 despite starting three freshmen and enduring a rash of frontcourt injuries.

But the Terps lost five of their next nine games, ending the regular season at the same spot in that AP Poll before a postseason with their earliest Big Ten tournament exit and their first NCAA opener loss in 13 tries.

“We started off really well,” guard Kevin Huerter said, “and then we kind of hit a rough spot, and then we never really re-gathered from that.”

Turgeon highlighted the team’s potential at media day in late October. Along with two-time All-Big Ten guard Melo Trimble, who waited until the last day to defer an NBA declaration for his junior season, the sixth-year coach lauded three rookies: Huerter, guard Anthony Cowan and forward Justin Jackson. They were “further along” than the Terps’ other underclassmen, so Turgeon expected immediate contributions.

“It’s a team that, it should be a pretty good team if we can stay healthy, come January, February,” Turgeon said before the season. “Good group.”

Injuries ravaged the unit. Guard Dion Wiley (back) and centers Michal Cekovsky (foot) and Damonte Dodd (knee) missed time in the first few months. Yet by Feb. 1, the then-No. 17 Terps had the best start in program history via eight wins in nine games to open Big Ten play and a 9-0 record away from Xfinity Center.

The three combined to average 30.1 points, while Cowan tallied a team-high 123 assists and Jackson led with 6.0 rebounds per game. Each player averaged at least 27 minutes.

“It’s just been a magical year,” Dodd said. “Just having three starting freshmen to produce the way they did and for us to make it as far as we did, I mean I’m just amazed at what we’ve accomplished.”

But Maryland never experienced that sustained success after its 73-72 home loss to the Boilermakers on Feb. 4.

There were highlights, such as Trimble’s career-high 32 points against Northwestern and his game-winning 3-pointer versus Michigan State in the regular-season finale. But those wins proved to be anomalies in the Terps’ late drought. In a three-week stretch in mid-February, they suffered a road defeat to Penn State and double-digit losses to Minnesota and Iowa at Xfinity Center.

Sitting at their lockers after Thursday’s upset, the Terps tried to explain the issues. Bender thought they started assuming wins regardless of whom they played. Dodd pointed to complacency while their conference counterparts improved. Other players couldn’t pinpoint a reason.

“Honestly, I don’t really know what led to our downfall,” forward L.G. Gill said. “We didn’t do anything differently.”

“That’s a tough question,” Jackson said after a long pause. “Honestly, I can’t even answer that. I don’t know.”

Those droughts haunted them in the postseason. Playing a de facto home game at the Verizon Center, the Terps allowed Northwestern 20-2 and 20-4 runs in their Big Ten tournament quarterfinal defeat.

Maryland tried to forget the performance, shifting its focus to securing a 13th straight first-round NCAA tournament victory. But it couldn’t overcome similar issues against Xavier at in Orlando, Florida.

Up six in the second half, the Terps failed to score for almost five minutes. Xavier countered with a 21-4 stretch for a double-digit advantage.

Silence filled the locker room after the 76-65 loss. Some players checked their phones, while other bowed their heads.

After a promising start to the year, the Terps recognized that feeling from their February slide.

“Once we got into that little funk,” Dodd said, “it was really hard for us to get back out of it.”