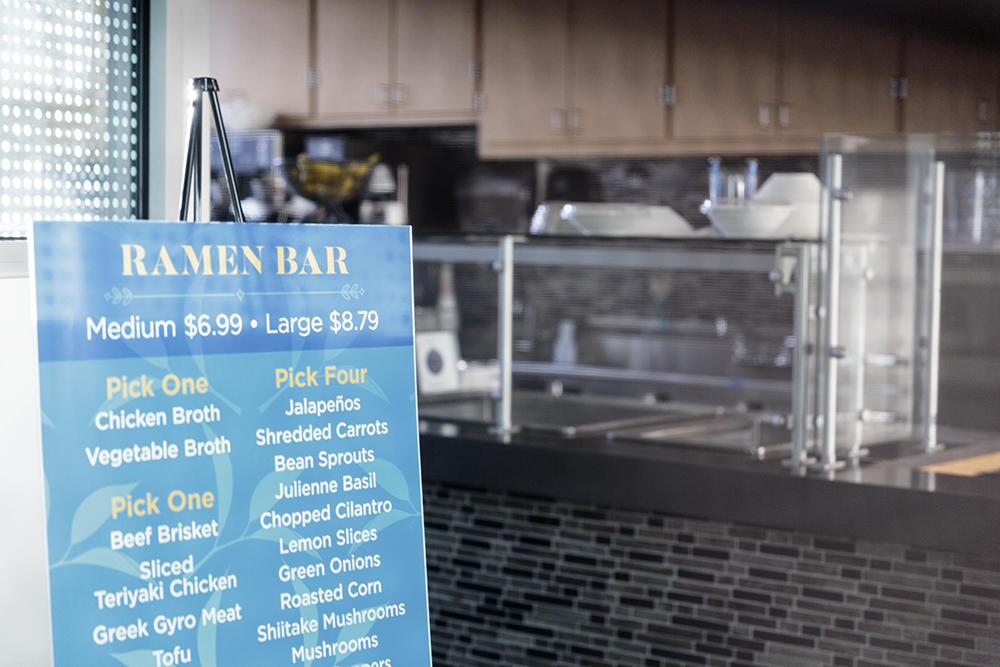 Dining Services originally planned to offer deli and coffee selections in a typical cafe in the renovated wing, but faculty and students in the building said they “wanted something unique,” said Bart Hipple, Dining Services spokesman.

Now, the cafe, called “Samovar,” offers traditional deli and coffee selections in addition to the featured items that make it different, Hipple said. The new wing of H.J. Patterson houses the international affairs and Education Abroad offices, along with international student services and other departments.

[Read More: Four UMD cafes are opening next year. On the menu? Foods like Ramen and sushi.]

A samovar is a metal urn that is used to make highly-concentrated tea. Samovar tea is one of the specialty teas offered at the cafe, and the faculty and students housed in the new wing chose the name, Hipple said.

“They had quite extensive conversations about what they would like the cafe to be [called],” he said, “and because there are so many international [departments] in the building, and they wanted an international flair to the cafe, they determined they wanted to call it Samovar.”

Miriam Kaufman, a senior neurobiology and physiology major, said she frequently comes to the new wing to serve as a teaching assistant, and found the cafe in an attempt to figure out where the smell of broth was coming from.

She said she was excited about the new cafe because she loves Ramen, and likes the idea of placing an international cafe near international departments.

“I think it kind of matches what they’re trying to do,” she said. “People don’t know about this cafe that much, and I think there should be a little bit more advertisement, but also it’s a nice little secret, maybe just for international students or new students coming in.”

[Read More: Campus cafes aren’t open as late as they used to be. Here’s why.]

Ross Lewin, the associate vice president for international affairs, said the renovated wing also provides a new home for international programs, like the Language Science Center, Israel Studies department and Office of International Affairs, in a central area of campus.

These departments were previously located in “temporary quarters” across campus, including Susquehanna and Taliaferro halls.

Samovar is bigger than some other cafes on the campus, so it’s unlikely the Ramen noodle bar option would expand to other buildings, Hipple said. A medium bowl of Ramen at Samovar is about $7, and patrons can customize their noodles with either vegetable or chicken broth and a variety of ingredients. There’s an assortment of protein and vegetable options such as chicken, tofu, corn and carrots.

This wing of H.J. Patterson — Wing 1 — was under renovation for a little more than a year, said Bill Olen, Facilities Management capital projects director. The construction was completed in November, he said, but it took several months to move in furniture so departments could start using the building.

“I think they’re moved into every space now,” Olen said. “There’s a little bit of finishing work we’re doing in a couple of the conference rooms, but it was occupied in January.”

The project, originally planned to be completed in February, finished ahead of schedule, and cost $18.5 million, Olen said. This is the first time this wing has undergone heavy renovation since its construction in 1931, he added.

The next step is to renovate Wing 2 of the building, and construction is scheduled to start in January 2018 and last until December of that year, Olen said.