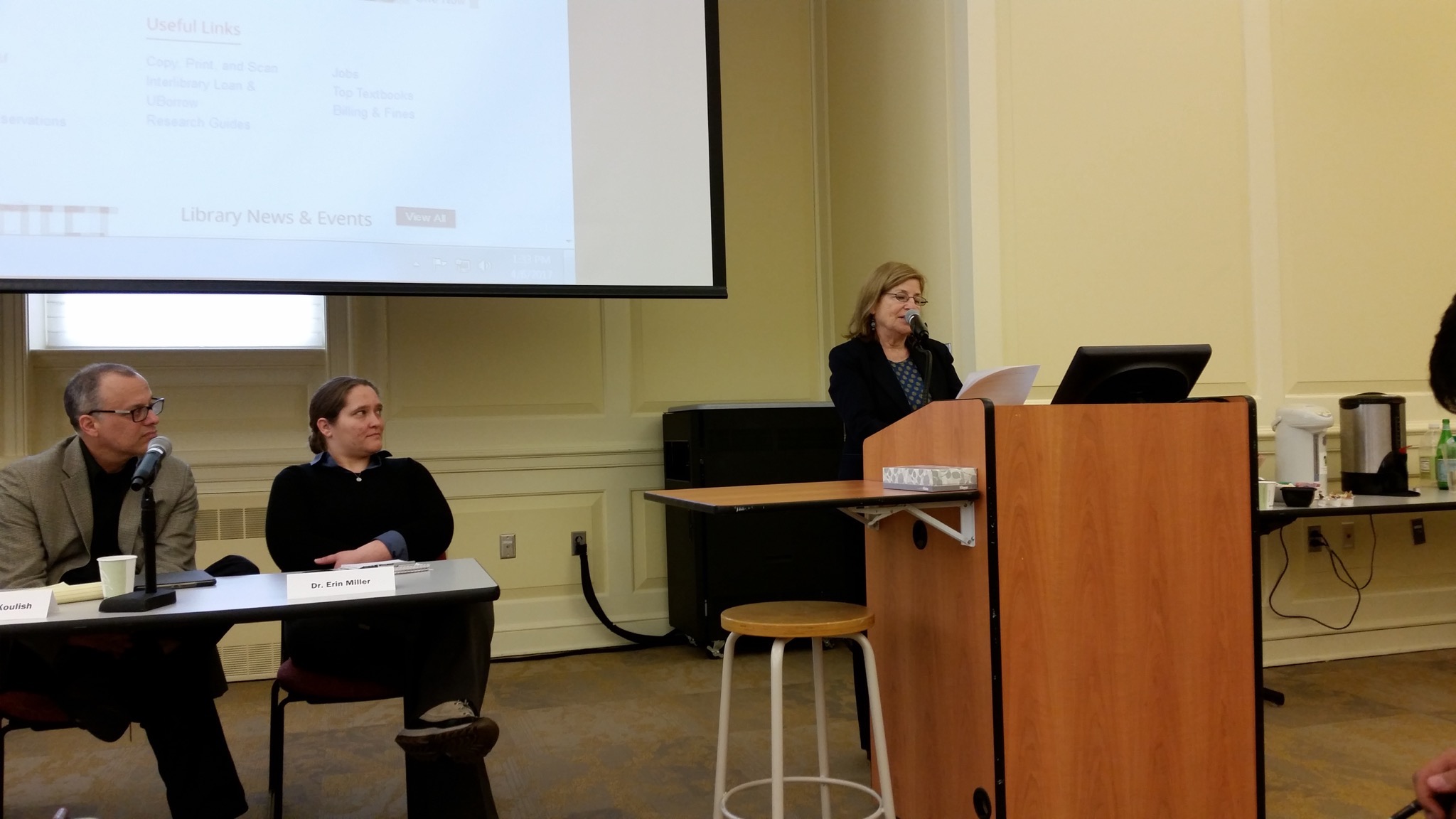 Even though Lily Griner has been an American citizen for 50 years, she’s still reminded to bring her citizenship papers with her each time she travels.

“Immigration is very near and dear to my heart,” said Griner, who moved to the U.S. from Poland. And given the current political climate, she said, it’s an especially important issue to discuss.

The forum — entitled “Immigration in the Age of Trump” — comprised three parts. In the first, audience members paired up and interviewed each other about their life and heritage. After forming small groups, each participant in the room of about 100 recounted their partner’s story in the first person.

Marian Digby, a school counseling graduate student, said she has attended many panel discussions before, but never ones with audience interaction like this.

In the second part of the forum, each panelist presented on their area of expertise, covering areas from counterterrorism to criminal law to anthropology and relating to different facets of the immigrant experience. The group also participated in a Q&A session.

Panelist Erin Miller manages the Global Terrorism Database program within the National Consortium for the Study of Terrorism and Responses to Terrorism housed at this university. She said that while fear of terrorism has driven much of the recent anti-immigrant sentiment, these concerns are counterproductive.

Restrictions on immigration and civil liberties that the U.S. has enacted after terror attacks have played into terrorist groups’ hands by alienating Muslims and reinforcing cultural divides, she said. After President Trump signed his first travel ban, for example, experts warned it would be fodder for the Islamic State group’s recruitment efforts.

“It’s very well-known that this is the strategy — it’s literally terrorism 101,” Miller said. “First day of class, you read the syllabus; second day, you learn this lesson.”

Many refugees coming to the U.S. are trying to escape terrorist groups, Miller said, adding that “if you’re worried about people suffering from terrorism, restricting refugee entry makes no sense whatsoever.”

Another panelist, MLaw Programs Director Robert Koulish, works with a group of “crimmigration” scholars who examine the intersection of criminal and immigration law. He said that naturalized citizens can break the law in minor ways — such as going a few miles per hour over the speed limit — that undocumented immigrants would get in trouble for.

“Your membership in society, as a green card holder, is very, very fragile,” he said. “If you have an interaction with the police because you went that figurative two miles per hour over the speed limit, you can find out in very, very short order that you’re not going to get away with that.”

Panelist Ronald Luna, the geographical sciences department undergraduate director, told his story of coming to the U.S. as an undocumented immigrant in 1986. He now works with the Hispanic and Latino communities in local areas, and he lamented the difficulties these populations face.

Susan Dougherty, International Student and Scholar Services director, said she served a different role than the others on the panel: While they conducted research, her sole duty is interacting with and helping students.

Her office recognizes “when we work with a person, whether they’re documented or undocumented, that we are working with a whole person,” she said. “Their identity is not equal to that status that they were given on entry to this country.”

For undocumented students on the campus, this university already does a great deal, but it should make the resources more available and more widely known, Koulish said. Recently, the administration announced it would create an undocumented student coordinator position.

“There are undocumented students, both here and elsewhere, that actually are eligible for legal status,” he said, “and they just don’t know it.”