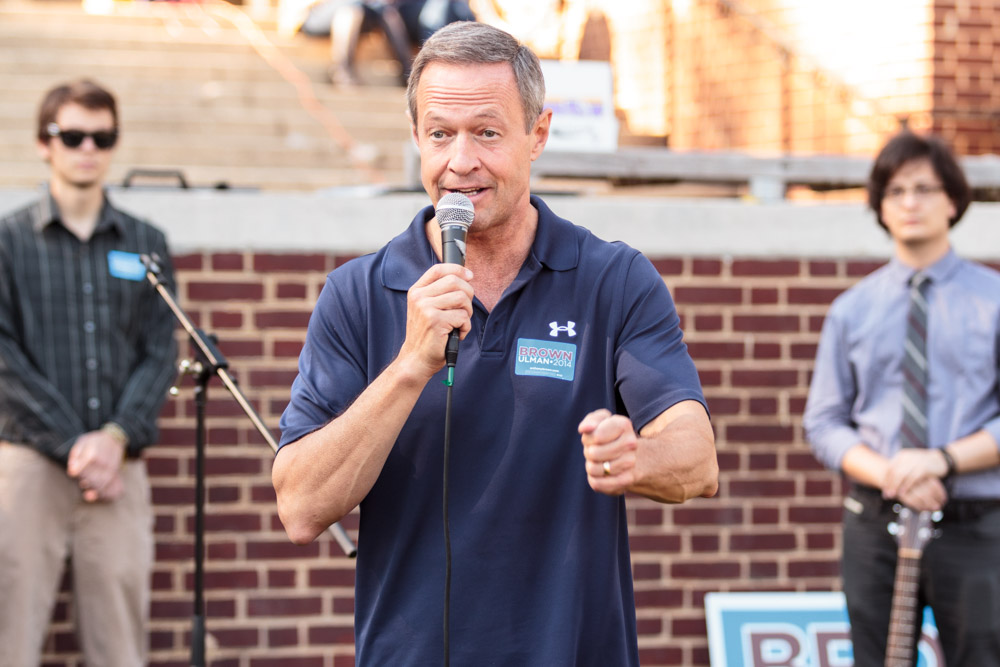 Martin O’Malley, a former Maryland governor and 2016 presidential candidate, is returning to the University of Maryland as an instructor in fall 2017 to teach a public policy course for undergraduate students.

The three-credit course, PLCY359M: Contemporary Issues in Political Leadership and Participation; Leadership in the Information Age, will meet on Thursdays from 4:15-6:45 p.m. and is available to all undergraduate students.

The course’s 30 seats are filled at this time, but faculty might expand enrollment if it’s feasible, said Nina Harris, the assistant dean for undergraduate studies in the public policy school.

“It’s pretty popular,” Harris said. “I think at most we will end up with about 60 people in the class — it just depends on demand.”

O’Malley, who earned a law degree at this university in 1988, and Harris began drafting ideas for the course in January when O’Malley told the public policy department he was interested in teaching undergraduate students, Harris said. The course was finalized about two weeks ago.

In order to learn how to be effective leaders in what O’Malley calls the “information age,” students in the class will analyze various case studies that the former governor has derived from his experiences in office, O’Malley said. Case studies will include topics such as crime, cleaning up the Chesapeake Bay, education and energy, he added.

“It’s about a new way of governing that I’ve seen emerging up from the cities and metro areas of the United States,” O’Malley said. “It’s what the next generation of Americans expect from government openness, transparency, the ability to show us what we’re getting for our dollar and whether or not what we’re doing is working.”

The former governor taught a similar course for graduate students at this university in the fall called Public Policy Topics; Performance Management and Leadership, which was about how to use certain data to make decisions around certain policy issues, Harris added.

O’Malley said he hopes to bring in public officials he worked with as governor as guest lecturers throughout the semester, adding that students in the past have particularly enjoyed hearing from practitioners in the field.

“It’s one thing to read about theory and political science, and it’s another to talk to people that actually have to pull together law and public policy and management and leadership and they can all work to produce tangible results,” O’Malley said.

After what O’Malley described as a “frustrating presidential run,” in which he failed to earn the Democratic presidential nomination, he said one of the more positive takeaways was the “goodness, optimism and fearlessness” of young people.

“In a time when our national politics seem to be in a pretty dark place, I find it energizing and uplifting to be able to talk to people that aren’t so cynical and jaded and want to destroy our national government or check out of their nation’s politics,” O’Malley said. “Young people understand that their government needs to work, and in essence, we all share a common good and we need to help each other if we’re going to succeed.”

O’Malley is also looking forward to the challenges that undergraduate students may pose, which could lead him to consider new perspectives regarding his political assumptions, he noted.

Harris said she believes O’Malley will teach a course in policy at this university each fall while teaching at Boston College during spring semesters.

This spring, O’Malley is teaching a course at Boston College called Leadership and Data Driven Government, according to BC News, and the Jesuit-educated Democrat is using this course to entwine his religious beliefs and political experience into a discussion about politics.

The former governor is also spending his time helping state legislative races and local parties, he said. He was in Charleston, South Carolina, on Saturday for a Charleston County Democratic Party fundraiser and town hall.

“The only way we’re going to be a majority governing party in our country again is by winning back our states,” O’Malley said.

O’Malley served as mayor for the city of Baltimore for eight years until 2007, when he became Maryland’s governor. O’Malley championed many goals as governor, including legalizing same-sex marriage in the state in 2012. He also made college education in this state more accessible by establishing the Dream Act, which grants in-state tuition to certain undocumented immigrants. He served as governor until 2015 before running in the 2016 presidential election.

A Montgomery County native, O’Malley lives in Baltimore with his wife, Katie, and four children.