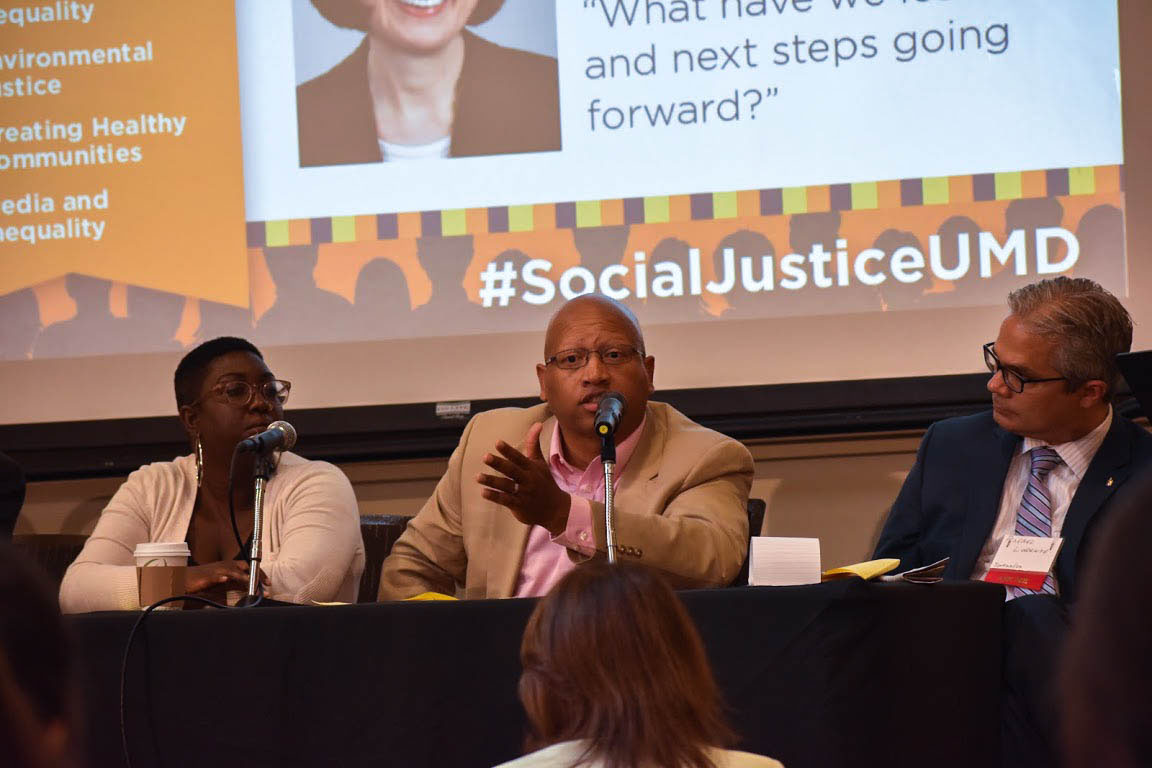 Discussion panel member Sacoby Wilson, assistant professor at the School of Public Health, answers a question posed by an attendee.

About 550 people participated in the University of Maryland’s inaugural Social Justice Day, which aimed to strengthen this university’s commitment to addressing social inequalities.

“[These] are the crying social issues of the day,” said university President Wallace Loh, who spoke to open the event. “Here we are applying our learning, our teaching and our research to address those issues from a particular perspective, the perspective of justice. We mean procedural justice, fairness, equality and substantive justice — human dignity, diversity and the values that define this county.”

The idea for the event came from this university’s Maryland Dialogues on Diversity and Community, a series of events that began in early 2016 to foster greater inclusion on the campus.

Jane Clark, a kinesiology professor and the co-chair of the event’s steering committee, said before the diversity dialogues, many of these discussions took place within individual colleges, but there was no cross-campus talk among faculty, staff and students. To help remedy this, Clark and a working group wrote a proposal for a campus-wide Social Justice Day, which Provost Mary Ann Rankin approved in fall 2016.

On the day of the event, former members of now-defunct Terps for Trump chalked pro-deportation and President Trump messages outside Stamp. Other students later washed the messages away with water.

Almost 40 people helped organize the event. The day included two interactive sessions in Stamp’s Grand Ballroom and Prince George’s Room that contained posters about relevant research and projects. Clark said the structure of the event helped participants have conversations with one another instead of being “talked at” or lectured by a speaker about social justice issues.

About 140 people sent in submissions of social justice projects to be featured at the event, Clark added.

For art education professor Margaret Walker’s display, she asked people from all over the U.S. to create postcard-sized artwork filling in the blank of the phrase “______ has no borders.”

Hundreds of these cards greeted visitors at the Grand Ballroom’s entrance. Some read “Love has no borders,” and “Equality has no borders.” Participants were urged to create their own artwork to add to the collection as well.

“Together I think it tells a story,” Walker said. “I think all the pieces together are really important, that they’re not individual pieces any longer, but together they all tell a story. There’s work from people from all different backgrounds, which is really nice.”

Peggy Liang, a junior government and politics major, said events like Social Justice Day allow people to “build partnerships and engage, to come together and to discuss … hard topics with each other.”

The day also included a panel where liaisons for each hub discussed how this university can expand efforts to address social injustices on the campus.

Richard Reeves, a senior fellow in economic studies and co-director at the Center on Children and Families, was the keynote speaker for the event.

Economic mobility, or the ability for someone to improve his or her income, has been eroding in America, Reeves said. Only half of Americans born in 1984 are better off than their parents, a steep decline from about 90 percent of those born in 1940, according to a 2016 National Bureau of Economic Research study.

“It happens as the result of intentional policy and intentional investments by individual community institutions,” Reeves said. “It will not happen by itself.”

Taylor Green, a freshman enrolled in letters and sciences, said she was impressed with how well Social Justice Day went even though it was its first year.

“[The event] did create a dialogue between students, faculty and staff and for them all to kind of understand each other,” Green said, adding that the interactive hubs were “really interesting” because they allowed for a more in-depth discussion of topics people usually don’t talk about.

At the end of the event, Rankin told the audience that she now had a “whole list of to-dos,” adding that next year she would report back on what suggestions this university was able to accomplish.