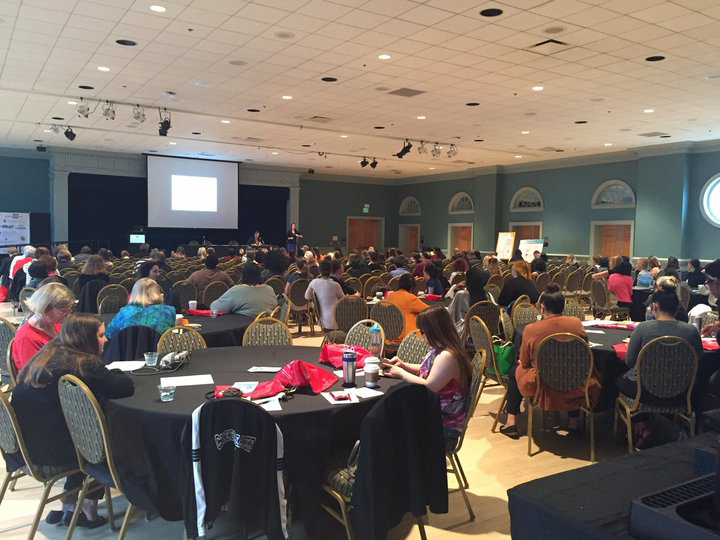 Teressa Ferraro has had random people on the street unwelcomely push her wheelchair, which she said is problematic.

“A lot of times, when I am going somewhere and I am crossing the street, someone will just grab my chair and start pushing me, and I’m like, ‘Hello random person I don’t know, please stop touching my chair now,'” the senior Russian and Spanish major said.

Being vocal about her disability, which she describes primarily as a mobility problem, is important and helps raise awareness, she said.

“I yell at them and then people get really offended and say, ‘I was just trying to help,'” she said. “And I am like, ‘Okay, just don’t touch, people. Consider.'”

At this university, students can struggle with connecting to other students with disabilities on the campus without a central meeting point, which is essential for raising awareness, Ferraro said.

“Part of raising that awareness is building that community, because without having a community to base that awareness off of, you’re kind of just throwing things into the void,” she said.

Accessibility and Disability Service, located on the lower level of the Shoemaker Building, offers students accommodations and services, including alternate text formats, sign language interpreters for classes, testing accommodations — such as extended exam times, screen magnifiers and text to voice or voice to text dictation software — and Para-transit, according to its website.

Linda Clement, vice president for student affairs, said this university offers many resources for students with disabilities, including the ADS and the Counseling Center’s Learning Assistance Service, which provides free academic support to students.

“We seek to make campus welcoming to all students, in particular students with disabilities,” Clement said.

The President’s Commission on Disability Issues, a group of staff and faculty who advise university President Wallace Loh on issues concerning people with disabilities, held its second annual Disability Summit, a day-long event featuring speakers who discuss topics relevant to the community, on April 21.

Junior information science major Blair Chisholm, who has a disability, said she wants a stronger community of these students.

Chisholm has been a member of Active Minds, a mental health advocacy group on the campus, since her freshman year and is working on starting a new club for general disability advocacy. The group’s name is tentatively “Terps for Disability Justice,” and it will focus on educating the campus community about what it means to be disabled, building a place for students with disabilities as well as allies and advocating for policy changes at the campus and local levels, Chisholm said.

Part of the problem of how disabilities are treated on the campus is that it’s circular, Chisholm said. People who can hide their disabilities will, she added, but because they do, are a part of this community, leading to less awareness.

“If someone is able to hide their disability, a lot of times they will choose to do that, because it’s a way to avoid some of the stigma and discrimination,” Chisholm said. But because of that, people don’t realize just how many people with disabilities they might be interacting with on a daily basis, she explained.

Chisholm once presented an accommodations letter from ADS to a professor, who didn’t “seem to understand that this has already been approved.”

“I don’t know if professors are really taught about how that kind of thing should be handled,” she said, adding that faculty should be trained on having students with disabilities in their classes.

Clement said there is no mandatory training about having students with disabilities in classes. The Office of Diversity and Inclusion offers diversity training for specific experiences of discrimination, such as religious bias, racism, homophobia, ageism, ableism and sexism, according to its website. But these trainings are voluntary, Clement said.

“Typically what happens is that a faculty member gets a student in his class that needs accommodations, and that’s when the faculty member will learn what it’s like [to have a student with a disability in the classroom],” Clement said. “It’s an individual education of faculty one at a time. It’s hard for them to learn everything they need to know to respond to every different kind of disability.”

Ferraro said she makes a point to vocalize accommodations she receives for her academic assignments. Some of her professors have worked with her on her accommodations, which can include getting extensions on assignments. The extra time can be very helpful for some students who have physical disabilities, she said.

The normalization of “nonstandard things,” such as getting accommodations for class or using a wheelchair, can help improve the way people with disabilities are viewed on the campus, Ferraro said.

“Some of that is on us as disabled students being able to be out there and say those things around our classmates, but I think it is a little on our professors in terms of making that space available,” Ferraro said.

Another way to raise awareness may be to establish a disability studies minor, Chisholm said. Carolyn Fink and Peter Leone, lecturer and professor, respectively, in the special education program, tried to establish the minor more than two years ago with a Moving Maryland Forward grant from the Office of Diversity and Inclusion, which supports projects addressing goals of this university’s Strategic plan for diversity. But the program fell through due to various issues including funding, Fink said.

“[The minor is] really eye-opening and becomes a way we think about the world in terms of how we can include marginalized groups and just acknowledge diversity,” Fink said. “We wish we could reward students for that.”

Other Big Ten universities, including Ohio State University and the University of Iowa, offer this minor or a certificate for disability studies. But even without this program, Fink said faculty and students “can continue to have a disability studies mindset without having the credential.”

Paul Jaeger, a co-chair of the Disability Summit and director of the information studies college’s Master of Library & Information Science program, said something as simple as aggregating resources onto a single website could help student with disabilities make connections and find resources.

But there is more to the issue than lack of resources, or a central space for them, Jaeger said.

“There’s a long history of disability being socially distanced,” Jaeger said. “Any dealing with disability in any context, there’s like an extra tension with dealing with it. Certainly more resources would be good, but it’s more than resources. There’s also a lot of perceptional things.”

Last summer, Ferraro traveled to Ecuador through the Education Abroad office’s Disabilities in Global Context program. She said she had previously written a paper about how she would not be able to study abroad because of her disability, but the office’s director, Moira Rogers, talked to her personally and made her apply, she said.

While she was in Ecuador, Ferraro insisted on going on a hiking trip. She dislocated her knee, but she doesn’t regret it.

“Sometimes, when you step out of your comfort zone and push your boundaries, you find that they were there for a reason, and that was one of those instances for me,” she said. “But I was able to have that experience and learn from that, as opposed to just being told that I couldn’t and having that opportunity closed.”

Ferraro will be traveling abroad again this summer to Argentina through Education Abroad.

“The study abroad office has been really great about working with me,” Ferraro said. “One of the things that [the office] has done that I haven’t necessarily seen other places on campus do is see us just as other students who just need something a little bit different.”