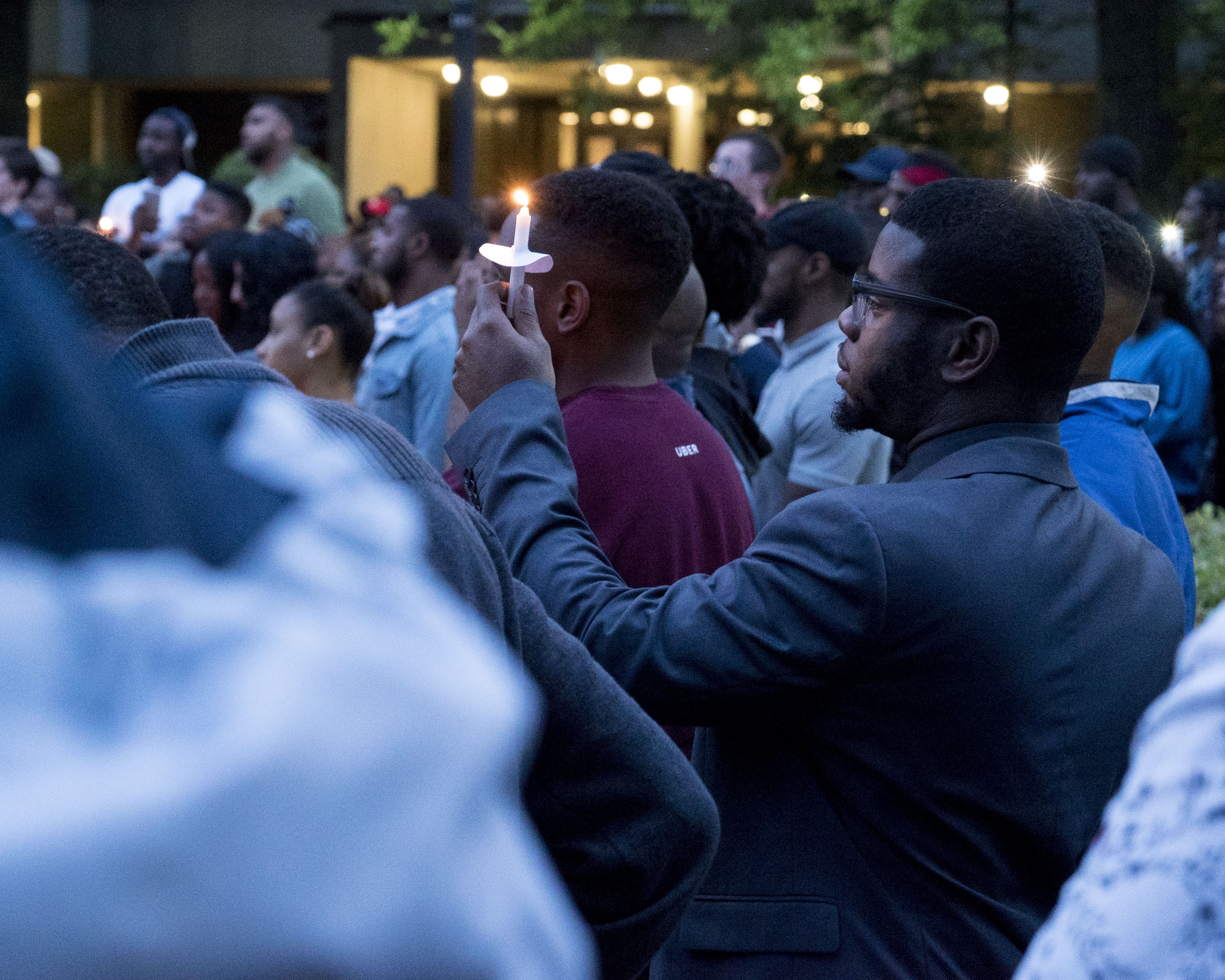 Students wrapped around the sides of Bowie State University’s Samuel L. Myers Auditorium on Monday night, waiting to speak at the microphone and share their experiences about their friend and former classmate Richard Collins III.

And before the microphone was open to all, many of his close friends and Bowie State leaders took to the stage to share poems, songs and memories of the newly commissioned second lieutenant in the U.S. Army.

“I love you, man, and I’ll remember you for the rest of my life,” Bowie State student Julian Harrell said, looking at a picture of Collins on a screen above the stage and struggling to hold back tears.

At least 15 University of Maryland students joined hundreds of Bowie State students, faculty and staff at a vigil to honor Collins on the eve of his expected graduation day.

The 23-year-old was pronounced dead at Prince George’s Hospital’s Trauma Center Saturday morning after he was fatally stabbed near Montgomery Hall at about 3 a.m.

Sean Urbanski, a 22-year-old student at this university, has been charged with first- and second-degree murder, as well as first-degree assault, in connection with the incident, which is being investigated as a possible hate crime. Urbanski is white and Collins was black. Urbanski is being held without bond and was denied bail at a hearing Monday afternoon.

Bowie State President Mickey Burnim said it was “incumbent on all of us to honor [Collins’] memory in a way that would make him proud.”

“[We need to be] celebrating our differences and diversity, always striving to express love to each other … and remembering always that there is nothing more precious to us than life,” Burnim said. “And that’s a gift. We should value it and treasure it and do all that we can to make a positive difference for all the time we have.”

“He was trustworthy, he was honest, and you could count on him. He was dependable,” he said of Collins. “So as I remember Richard, I’m going to remember his character first and foremost.”

Phylecia Faublas, a Bowie State student, said she met Collins during the Baltimore City riots in 2015, when he convinced her to come with him and watch the protests unfold.

She called Collins “fearless” and said he was the “kind of person that needed to be protecting and serving our country.”

Many students knew of Collins through his involvement in the ROTC program. Thomas said Collins was a member of the color guard and was airborne-qualified during his time in ROTC.

Paris Clifton, a Bowie State student and friend of Collins’, echoed sentiments expressed during the vigil, remembering him as fearless, determined, helpful and daring.

“There’s nothing bad to say about him,” Clifton said.

Wojahn said he came to stand “in solidarity with the students in Bowie State and to extend our condolences.”

A noose was found hanging in the kitchen of this university’s Phi Kappa Tau fraternity chapter house on April 27, and there have been five reported instances of white nationalist posters found across the campus since December. All these events are being investigated as hate bias incidents.

After the speakers, those in attendance walked outside to Bowie State’s MLK Plaza. They stood in front of a blazing torch and silently released orange, blue and green balloons into the fading daylight.

During the vigil, some students at this university voiced their frustration with this university’s administration’s response to racist incidents on the campus.

On May 10, members of ProtectUMD, a coalition of 25 student groups, arranged a sit-in at this university’s Main Administration Building to demand administrative action in response to recent incidents threatening minority students on the campus. Members of the coalition of student groups were disappointed university President Wallace Loh did not respond to their demands, while Student Affairs Vice President Linda Clement addressed those participating in the sit-in.

“There’s a noose hung on our campus and our president doesn’t let us know until a week and half later,” Yanet Amanuel, an alumna of this university, told Bowie State students through a microphone on the plaza after the vigil. “Now they want to say they’re about diversity and inclusion, but we lost a brother. The loss of one life is a loss to us all.”

Others were upset Loh didn’t attend the vigil.

“[The administration] never showed up to anything community-wise,” said Ashley Vasquez, a senior sociology major. “I wish they were here. We did have a lot of community members … so I do believe we have community support, just not from our administration.”

Erica Fuentes, a 2017 alumna of this university, said she attended the vigil to support the Bowie State community after “something that could have been prevented” and something the university needs to “hold ourselves accountable for.”

“President Loh has to take a stand,” said Fuentes, the former president of Political Latinxs United for Movement and Action in Society. “He has to acknowledge the role the university has played and the role the administration he has led in playing. Time and time again the university has been complacent in instances of hate and instances of racism.”

A.J. Pruitt, this university’s Student Government Association president, said he attended the vigil to give his condolences for what happened.

“It is another reminder of a continuing problem,” the senior economics and government and politics major said. “This needs to be a point where we take serious action, and it’s unfortunate that we have to get to this point.”