A UMD team won $20,000 for its Alzheimer’s-detecting device 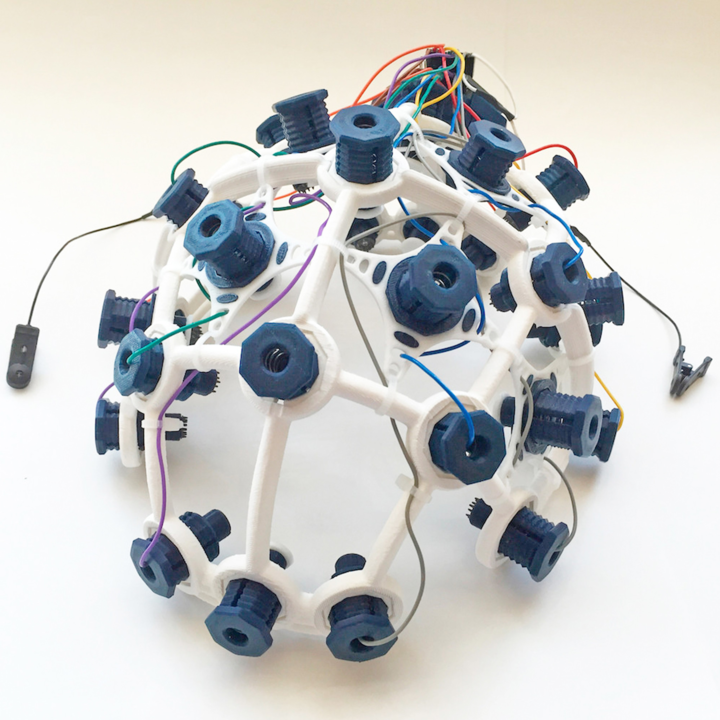 A group of seven undergraduate students won a $20,000 prize for placing first in this year’s Design by Biomedical Undergraduate Teams challenge for creating software that helps detect Alzheimer’s disease.

The team, called Synapto, used a headset device that senses electrical activity inside a person’s brain. In certain situations, such as when hearing audio, patients with the disease have different brainwaves than those who don’t; the device can detect these differences to tell if a person has Alzheimer’s.

The group has been working on the technology since January.

One of the biggest challenges with Alzheimer’s is that it can be diagnosed only after symptoms occur — when the patient could already be progressing from early to middle stages of the disease, said Dhruv Patel, one of the team leaders.

“Our goal with this project is to detect the disease earlier, before the onset of symptoms,” said Patel, a sophomore bioengineering major.

According to the Alzheimer’s Association, the disease is currently the sixth leading cause of death in the United States.

Patel and Chris Look, co-leaders of the team, both have personal experiences with Alzheimer’s disease.

Look’s great-grandmother died when he was little, he said.

“I was very little and didn’t really understand what was happening at the time, but now that I am older I understand how painful it was,” said Look, a sophomore bioengineering and computer science major. “If our research could prevent some of that pain by diagnosing people earlier with the disease, I would say our goal has been reached.”

Synapto team members said they will use their $20,000 prize to patent their software, buy more headsets — which cost about $1,500 each — and invest in clinical trials of their product.

[Read more: The new home of UMD’s bioengineering department will be ready this month]

Before winning the competition, the group had no research funding and relied on linguistics department chair Bill Idsardi to provide the initial hardware.

Look hopes that one day this product can be on the market as a more affordable option than what is currently available, which usually involves a MRI machine test that costs thousands of dollars, he said.

“I am so proud and excited for them,” said John Fisher, bioengineering department chair. “They are off to a great start, and I am excited to work with them over the coming years.”

There are five awards: first, second, third, venture and design excellence. Each team who won — out of the 41 entered projects into the competition — will present its project at the annual Biomedical Engineering Society conference in Phoenix in October.

Synapto, along with presenting its project for the competition, will present at the event for the Biomedical Engineering Society’s Undergraduate Design Competition, where the team is a finalist.

“This device is a lot cheaper than an MRI machine test, so hopefully in the future people can use our product and save money,” Look said. “I think it will be harder, but I believe we have at least a chance to win this other competition as well, especially after this product came in first for the DEBUT challenge.”