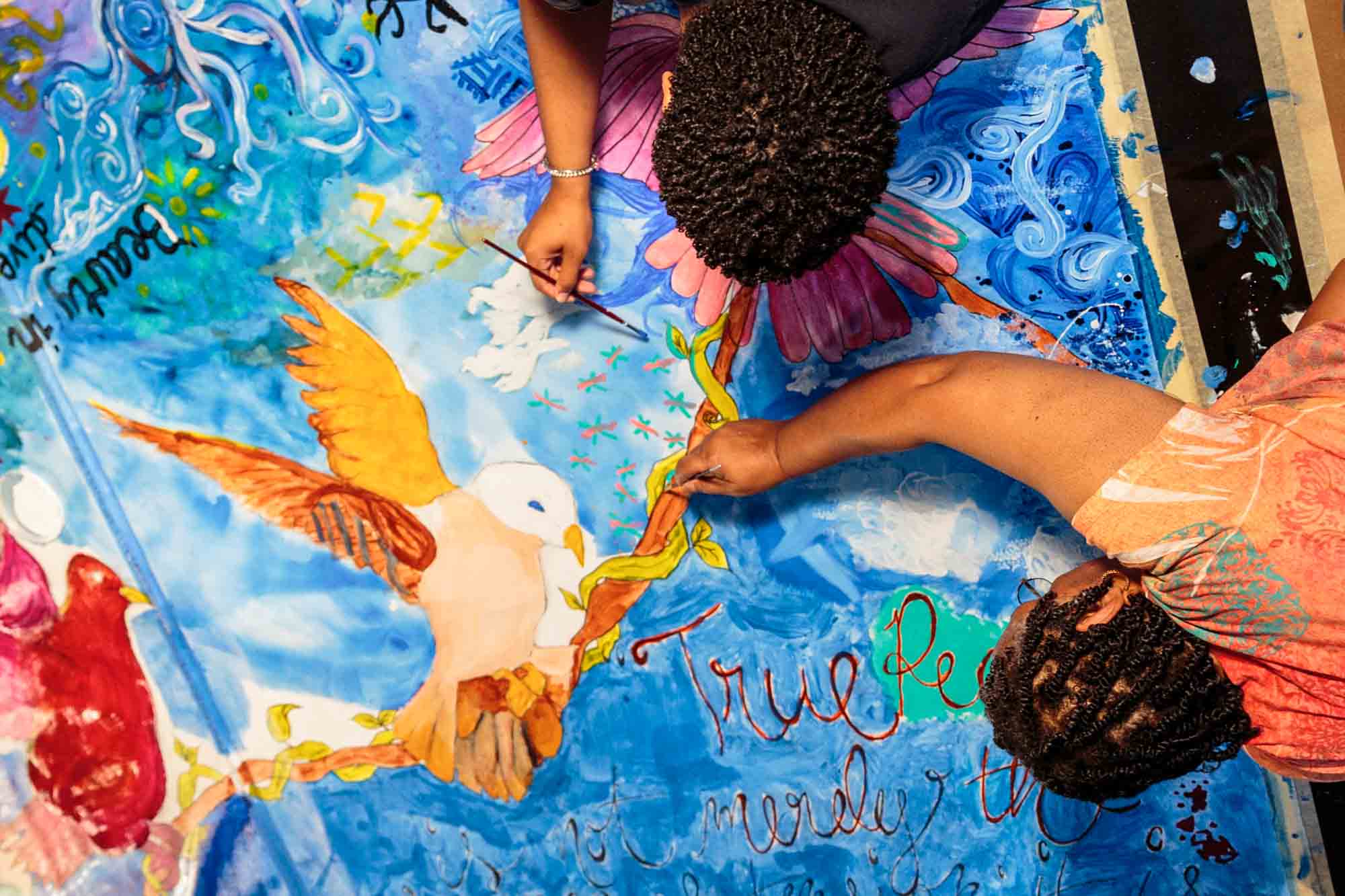 Strokes of warm red and deep blue fill the panels’ blank space. Laughter erupts as hands pass brushes and paints to one another. Birds fly toward the edge of the canvas, unraveling vines tangled around two wrists.

The mural’s center panels depict open hands for freedom, doves for peace and a sun for hope. Semicolons make the sun’s rays, symbolic of a continuing story.

Students and faculty from the University of Maryland and Bowie State University gathered in The Clarice Smith Performing Arts Center this week to sketch and paint a mural honoring peace, justice and unity.

It expresses a theme of positivity in the midst of hatred and injustice, said Jennifer White-Johnson, a visual communications and digital media art professor at Bowie State.

“There is an artistic healing process that is happening between both schools,” she said.

The mural comes after the two universities were shaken by the murder of 2nd Lt. Richard Collins — a Bowie State student — three days shy of graduating, on the campus in May. Collins was visiting friends and was fatally stabbed at the Montgomery Hall bus stop at about 3 a.m.

Megan Pagado Wells, associate director of The Clarice Artist Partner Program who leads the curation and management of NextNOW Fest, reached out to Bowie State in August to discuss the possibility of the two schools collaborating on a project.

“A partnership formed really quickly,” Pagado Wells said. “Everyone was excited about the idea and saw the value of having the two campuses come together.”

Both schools’ arts departments sprung into action, some professors — including White-Johnson — incorporated the mural into their class agendas. Art students coordinated strategy and style ideas over the web, sharing sketch concepts via Skype and GroupMe, White-Johnson said.

“It’s exciting working with the Bowie State students in person instead of through a screen,” said Isabel Divinagracia, a senior education and studio art major. “Seeing how passionate they are about this and all our effort paying off is pretty awesome.”

Each university will have the opportunity to display the final product on its campus. Afterwards, the mural will be split in half for each school to hold onto as a reminder of the good that comes from unity, Pagado Wells said.

“Art is a great way to bring everyone together,” said Angel Tillery, a senior visual communication and digital media arts major at Bowie State. “I see a lot of potential between our two schools stemming from this mural. We should be doing more things like this together.”