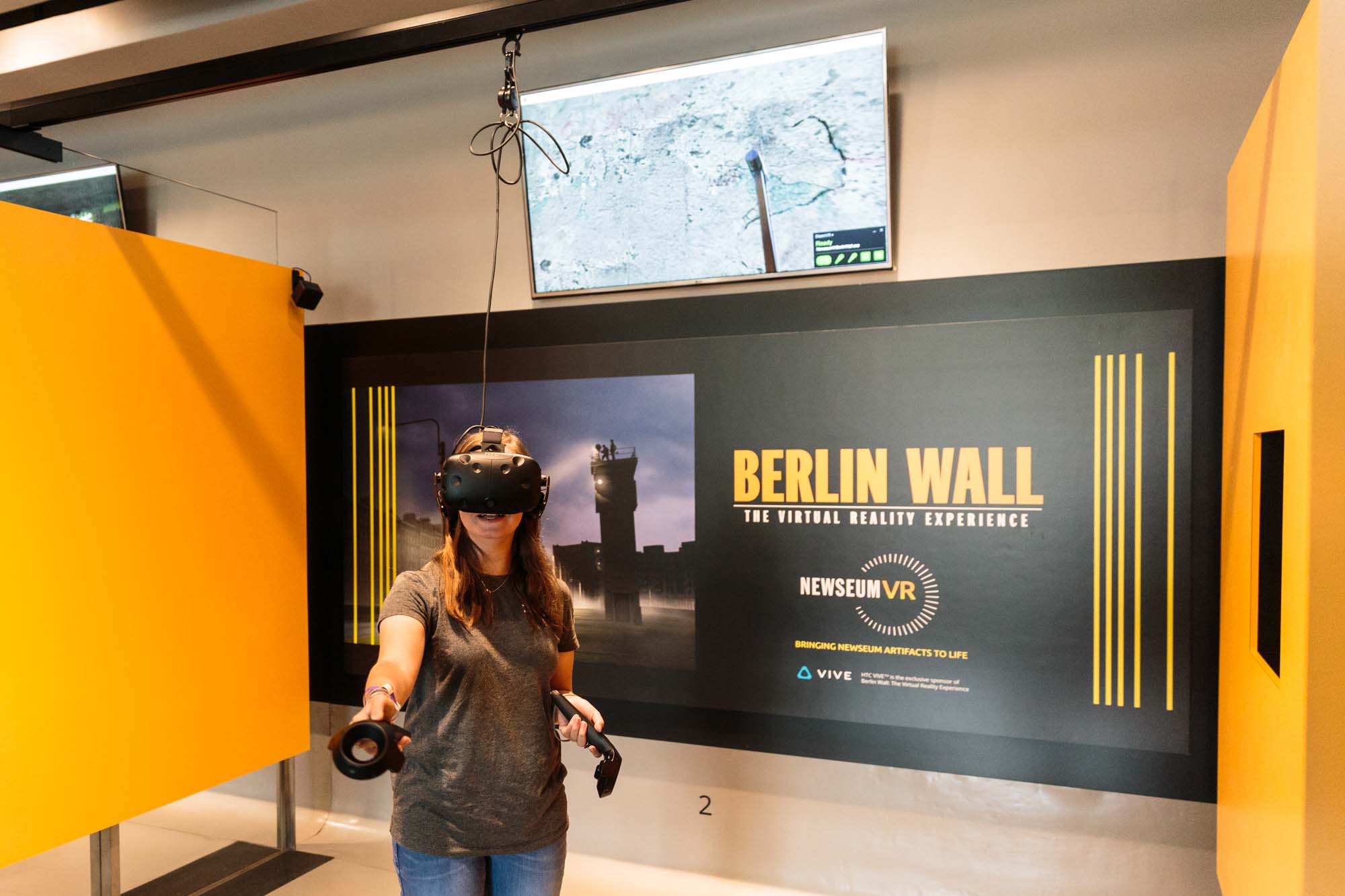 In a virtual West Berlin, a news correspondent briefly discusses the Berlin Wall’s history under the backdrop of the wall’s graffiti. Visitors can hear former president Ronald Reagan’s famous 1987 speech with the quote, “Tear down this wall!” playing in the background. People roam the streets of East Berlin, where communist propaganda posters are scattered throughout, setting an ominous scene.

With a virtual reality headset, headphones and two handheld controllers, Newseum guests can experience both sides of Berlin during the peak of the Cold War — all by walking around one of the four designated 10-foot-by-10-foot spaces in the museum.

On the top of a guard tower, individuals grab onto a searchlight and try to catch “wall-jumpers” while witnessing the same view as the Eastern German army once did. A search in an abandoned building leads to a secret tunnel where people can escape to the safety of West Berlin.

In the final moments of the exhibit, people pick up a sledgehammer and take a few swings to destroy the infamous wall. For 13-year-old Alyssa Aberylaabs, who waited in line for an hour to try out the interactive VR exhibit Saturday, this was her favorite part.

“I felt like I had so much power in that moment,” said Aberylaabs, who had never tried VR before. “This is a really important part of history that affected so many people’s lives, and the entire experience felt like you were actually there helping to make a difference.”

The exhibit, which University of Maryland students and faculty helped create, has become a hit with museum-goers. About 125 people a day go through the immersive experience, and there is almost always a line, said Mitch Gelman, chief technology officer at the Newseum.

“Universally, it’s most people’s first time trying fully immersive virtual reality, and many of them are shocked that it’s possible to be able to teleport around a place that previously only lived in history books,” Gelman said.

This interactive exhibit is separate from the eight sections of the Berlin Wall — the largest display of unaltered portions of the wall outside Germany — as well as a guard tower that are housed in the museum, both of which have been on display since the museum first opened. The VR exhibit has been open for about two months and will be open through December 2018.

Janet Purnell, who’s been an employee at the Newseum for nine years, said she’s worked the VR exhibit numerous times.

“Young people love it, and old people get nervous because they feel like they are falling since it feels so real,” said Purnell, who has also gone through the demonstration. “It’s a wonderful experience, especially if you’ve never experienced virtual reality before.”

About seven people from the Newseum and this university collaborated on creating the original prototype of the exhibit in 2016 before HTC stepped in to make the exhibit a reality. The group from the university is part of the University of Maryland Institute for Advanced Computer Studies.

“We ended up choosing the Berlin Wall to make a VR exhibit of because we thought it illustrated best one of the key tenets of the Newseum’s mission, which is freedom of expression,” said Gelman, also an adjunct lecturer at this university’s journalism college. “We enjoy every opportunity to use emerging technologies to help tell stories that further our mission of promoting and explaining the value of first amendment freedoms.”

Mukul Agarwal, an alumnus of this university, was part of the team that worked on the exhibit. He helped create the virtual environment using development platform software. The process, which began in spring 2016, to create the initial program took about two to three weeks, he said, but overall collaboration between the school and museum took several months.

“The fact that people are actually using this technology is great,” said Agarwal, who graduated in May with a master’s in human-computer interaction. “I think it’s important for people to experience how terrifying it was to be in Berlin in the ’80s and what people living there were feeling at the time.”

This project wasn’t the first time this university partnered with the museum. Students’ videos are sometimes featured in the Newseum’s list of top 10 VR videos of the month, showcased in the museum, including a currently featured 360-degree video from Capital News Service about the threatened honeybee population.

HTC backed four more VR experiences after seeing the success of the Berlin Wall interactive exhibit, Gelman said. The next one in the series is about the Unabomber, a killer who mailed bombs to people working with technology for 17 years before he was caught in 1996. In this exhibit, individuals will be able to join the FBI Unabomber Task Force and participate in collecting and analyzing evidence to make a case against the perpetrator.

“Having a VR component helps people really experience important points in history,” said junior computer science major Brian Murray, part of the Transcend VR student startup. “I definitely want to go to those exhibits — I’m just sad it’s not one of the free museums in D.C.”