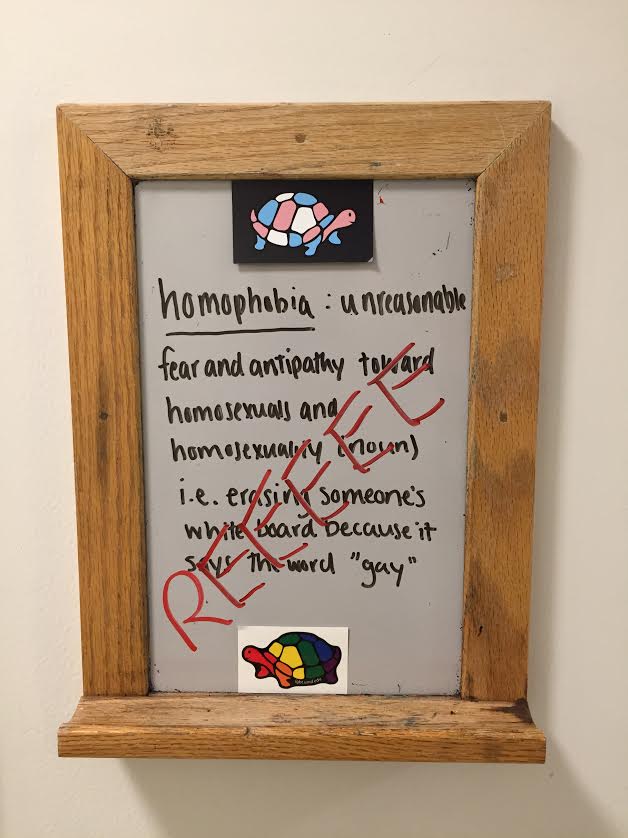 After a University of Maryland student’s whiteboard was plastered with a derogatory slur last Monday, police are not classifying the event as a hate bias incident.

Sophomore psychology and Spanish major Logan Dechter wrote the definition of homophobia on his whiteboard outside his dorm in Anne Arundel Hall after several LGBT-friendly messages were erased from it, he said. An individual later wrote “REEEEE” on top of the message, he added.

The term is meant to sound like a frog but as a scream, and is used to either express outrage or represent so-called autistic screeching, according to the Southern Poverty Law Center.

“Not only was it insulting to the LGBT community, but it was also insulting to the disabled community, so it was homophobic and ableist in that sense,” said Dechter, who added he was so upset he had to skip one of his classes. “I was really upset by that. I was anxious and angry.”

“It was a joke,” police spokeswoman Sgt. Rosanne Hoaas said. “The individual who wrote the word, it was an attempt to be funny but that’s something that again the motivation behind did not rise to hate bias.

“The law in this regard is what is the individual’s motivation behind said behavior or action. Since we were able to talk to both individuals, it was determined from our standpoint at least it did not rise to be a hate bias incident.”

Tracy Kiras, Resident Life’s assistant director for communications and marketing, said, “After interviewing the students, it was definitely confirmed that there was no hate or bias behind the word in the drawing that’s on the whiteboard.”

The same resident who drew on Dechter’s whiteboard also drew the symbol for Kek — a god-like figure representing part of the white nationalist movement that uses memes to attack groups online — on his own whiteboard, Hoaas said.

Kek represents the alt-right ideology of “racial, ethnic and misogynistic hate,” and the group’s logo is prevalent at alt-right and white supremacist marches, including the march in Charlottesville, Virginia, according to the Southern Poverty Law Center website.

“Either way, it’s not okay, because even if this is just a joke, it perpetuates the idea that hate is okay,” said Michael Weiss, a freshman biology major who also lives in Anne Arundel Hall. “And there are certain things you should just not joke about … it’s mean-spirited.”

While University Police said the case is closed, Resident Life is still conducting its own investigation. The department would not comment on whether this case will be referred to the Office of Student Conduct.

“We’re continuing to work with the students because words have an impact,” Kiras said. “We try to take a very educational approach with our students to help them understand what it means to live in a community, what it means to write things that they might think are harmless or comical or meaningless, but actually have impact on other community members.”