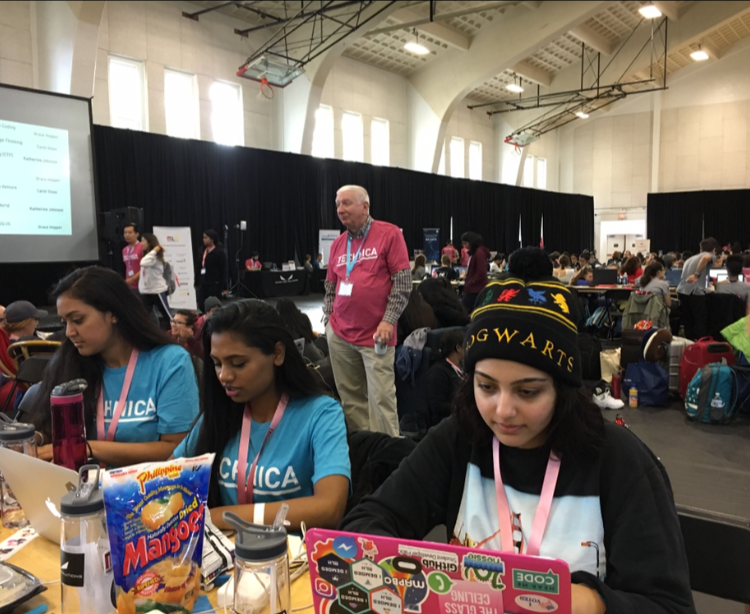 Over the weekend, the University of Maryland hosted Technica, attracting about 900 female hackers to participate in various projects that included the creation of apps and websites.

This university has hosted the all-women hackathon for the past three years. The event is the world’s largest women’s hackathon, said Hanna Kim, a junior computer science major, who helped organize Technica. The event has more than 50 sponsors, including this university’s engineering school and the computer, mathematical and natural sciences college.

For 24 hours — from Saturday morning to Sunday morning — women across the country worked on creating entertaining and helpful apps, games and websites.

Many of the participants were involved in STEM-related fields in various universities, but about one-third of the attendees were high schoolers, said Nazifa Chowdhury, a junior computer science major, who also helped organize Technica.

Teams from various institutions competed to win awards such as “Best Cybersecurity Hack” and “Best Hack for Social Good.” There was $5,370 in prize money up for grabs and the winners will be announced soon, according to Technica’s website. Technica participants also had the opportunity to attend various workshops. For instance, Jasmine Soni, a freshman computer science major, and her team learned about technical topics such as web development, hardware and virtual reality.

In addition to the awards and opportunities, Chowdhury said the mission is to get more women involved in technology, as well as build a community within the computer science field.

“Our team isn’t as big as the Bitcamp team,” Chowdhury said. Bitcamp is this university’s other student-run hackathon. “But our mission is just as important, and I think if more people realize that, the better we’ll be, for women in tech, and for tech in general,” Chowdhury added.

“It’s kind of intimidating, but at Technica, it’s all girls and we can all work and we don’t have to feel like we break any stereotypes, we can just be ourselves,” Pan said.

Soni had the opportunity to make an application that would help individuals save and invest their money at the event. She was also a first-time Technica participant, and said she felt nervous at first.

“Sometimes I feel a bit uncomfortable, being someone a bit shy, I feel a little bit awkward sometimes,” she said. “But in general, nowadays it’s not a disadvantage … to be a woman, I’ll get some perks, because people look for women in the field.”

Other participants such as Sabrina Smai, a junior computer science major from the University of Toronto, were more experienced.

“I’ve been to many hackathons, but the vibe here is totally different,” Smai said. Smai created an augmented reality app to teach people how to speak new languages in interactive ways.

“We’ve been to a few workshops and they were pretty helpful,” Soni said. But this event is unique because it builds up the confidence of female hackers and promotes their involvement in the field, she added.