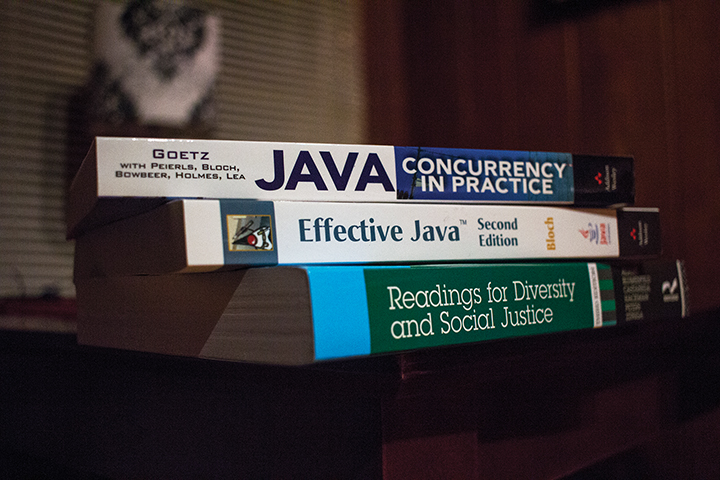 University of Maryland student Kayla Little has wanted to be a doctor since she was 11 years old — but a nationwide rise in textbook prices has proved to be an obstacle to her success.

“I’ve wanted to go into medicine for the longest [time], and I really don’t want to give that up for books,” said Little, who hopes to go to medical school and become an orthopedic surgeon for a professional sports team.

The rising cost of college textbooks is a prominent issue nationwide. Between 1998 and 2016, textbook prices have almost tripled, according to the American Enterprise Institute, a conservative public policy think tank. The average cost of books and supplies during the 2017-18 academic year ranges from $1,220 to $1,420, according to College Board’s Annual Survey of Colleges.

“Since I’m pre-med, I take a lot of science classes so I already know right off the bat that I’m going to have to come out of pocket with some money to pay for the books, access codes and anything online they want us to get,” said Little, a junior communication major.

A new bill authored by State Sen. Gail Bates (R-Howard and Carroll) seeks to create tax holidays for the next academic year. The bill, which will be heard in the state senate on Feb. 28, would establish two tax periods — each of them one week long — at the end of January and August when all college textbooks would be tax-free, Bates said. The holiday would apply only to current college students who are buying a required book for a course, she added, and would not be available for online book purchases.

Maryland’s state legislature has attempted to reduce college textbook prices in the past. Several bills seeking to create tax-free periods in which college textbooks would be exempt from state sales tax have failed at various points in the legislative process due to the loss in tax revenue.

“Everybody’s complaining about the high cost of higher ed,” Bates said. “This is not a huge amount of that, but it’s a way to keep the cost down a little bit.”

Little said she averages about $600 in textbook costs per semester, which she said is stressful not only because of the high initial cost, but also because she won’t get much money if she sells her books back at the end of the semester.

This semester, Little said she was forced to drop her Spanish class because she couldn’t afford the textbook and had to forgo buying lab procedures manual for her physics class because it was too expensive.

“I don’t want to lose points because of $60,” Little said of forgoing the physics manual. “But if I need that money to eat, then that’s what I have to do. I’m already at the point of buying food from the dollar store than from an actual grocery store.”

In fall 2016, Little — who receives Pell grants to attend school — said she spent “all the money I had left on textbooks and I had $8 to my name for a whole month straight,” which was “very complicated.” The junior said she relied on her family for gas money and meals because she “really didn’t have much of a choice.”

“Our ultimate goal is to have as many courses on campus use open-source textbooks as possible,” Dahal said.

“It’s phenomenal. It’s relatable and concise. I actually like it a lot more than a regular textbook,” Little said. “Of course, because it’s free, too.”

Despite MaryPIRG’s advocacy for open-source alternatives, the online resources have been slow to gain widespread acceptance. A 2016 study in the International Journal of Research in Education and Science cited a lack of awareness, variable content quality and licensing issues as possible reasons for its slow growth.

Twenty-one states and Washington, D.C., exempt college textbooks from sales tax, while another five states have no sales tax altogether, according to Student Debt Warriors. Maryland’s sales tax is currently 6 percent and does not exempt textbooks.

This university’s Student Government Association cares deeply about the issue of textbook affordability, said government affairs director Mihir Khetarpal. But the SGA has concerns about the time periods described in Bates’ bill, and has not decided whether it will support it, Khetarpal added.

“We try to look at the dates that the tax-free period tries to create. This time, it’s a little bit better,” the senior economics and government and politics major said. “In [past proposals], they have not aligned with the University of Maryland school calendar at all.”

Dahal is skeptical of the potential legislation.

“Having a tax-free week that entices students to buy textbooks doesn’t promote the use of the alternatives that we have — open-source textbooks,” the sophomore biology and chemistry major said. “If a student goes out and purchases a traditional textbook during this time period, that doesn’t encourage them to look into alternatives.”

While the state legislature has had some failed attempts to assist with textbook affordability, MaryPIRG is working to promote open-source textbooks on campus. The group is organizing a march across the campus this semester to raise awareness about the initiative and show that traditional textbooks are a burden on students, Little said.