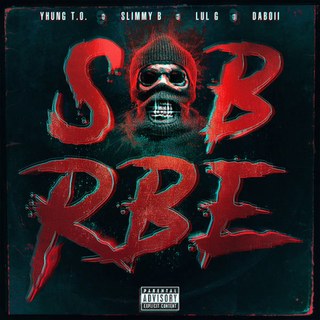 Hip-hop group SOB X RBE (Strictly Only Brothers, Real Boi Entertainment) introduced itself outside of its Vallejo, California, hometown with “Paramedic!,” a firecracker of a track off Black Panther: The Album that inspired truly golden Twitter Content™.

As soon as I hear Paramedic come on in Black Panther.. it’s a go #BlackPanther ✊🏾 pic.twitter.com/awNgdpVngg
— Austin Pope (@AustinPope_) February 13, 2018

The artwork for GANGIN, SOB X RBE’s studio debut, establishes the aesthetic of the collective that includes Yhung T.O., DaBoii, Slimmy B and Lul G (which I guarantee are not the names of you and your friends). SOB is written directly above RBE on the album cover in a menacing blood-red, while a ski-mask wearing, grill-rocking skull sits within the “O.” Driven by the Red Bull sponsorship-deserving energy of Slimmy B and DaBoii and the SoundCloud smooth crooning flow of Yhung T.O., GANGIN is a hyphy-inspired, punch-to-the-face of an introduction that would perfectly soundtrack any bank robbery movie scene.

GANGIN comes equipped with 15 tracks and a blistering 43 minute runtime. Slimmy B and DaBoii, who rap over perennially clapping and slapping production with a level of intensity previously unmeasured in this solar system, carry the torch through the opening songs. DaBoii delivers the type of punchline in “On Me,” the album’s second song, that makes people tweet song lyrics. “Now the Glock ‘Lil’ Kevin cuz he ride along,” raps DaBoii in reference to the Kevin Hart-Ice Cube 2014 buddy cop film.

Yhung T.O., a rapping/singing monster on hooks, flexes as the group’s human Swiss Army knife throughout GANGIN. He does the hook and all but one verse on “Anti Social,” a catchy track that admonishes all those who are fake (thus causing him to be anti-social). On “Lifestyle,” T.O. carries the album’s momentum with a flawlessly executed chorus.

“These days I’ve been tryna get my life right,” admits T.O. with the palpable authenticity that lives in the group’s sound. “I been blowin’ out smoke in the night sky.”

Instead of going for the “all members on every song” approach that turned Migos’ Culture II into a trudging marathon, the SOB X RBE boys opt for a 4×100 relay sprint style that’s illustrated by tracks 10-13. On “Paid in Full,” DaBoii bursts off the blocks threatening his foes: “Catch a opp like I’m Kobe, you don’t get no pass.” Slimmy B stays sprinting while shedding light on his conversations with a higher power on “God”: “I just pray to God that devil stay away.” Lul G maintains the pace on “The Man Now” while T.O. takes a victory lap on “Y.H.U.N.G.”

“Girl, I got a lot of money I’m fine,” states the rapper before explaining his true value to a potential lover. “I can take care of you and your moms.”

SOB X RBE is bringing national prominence and a youthful passion to the hyphy Bay Area music scene that dates back to the ’90s and Oakland rapper Keak da Sneak. Barring blown out vocal chords from their definitively over-the-top style, we’ll probably look back at GANGIN as the genesis of an illustrious career.