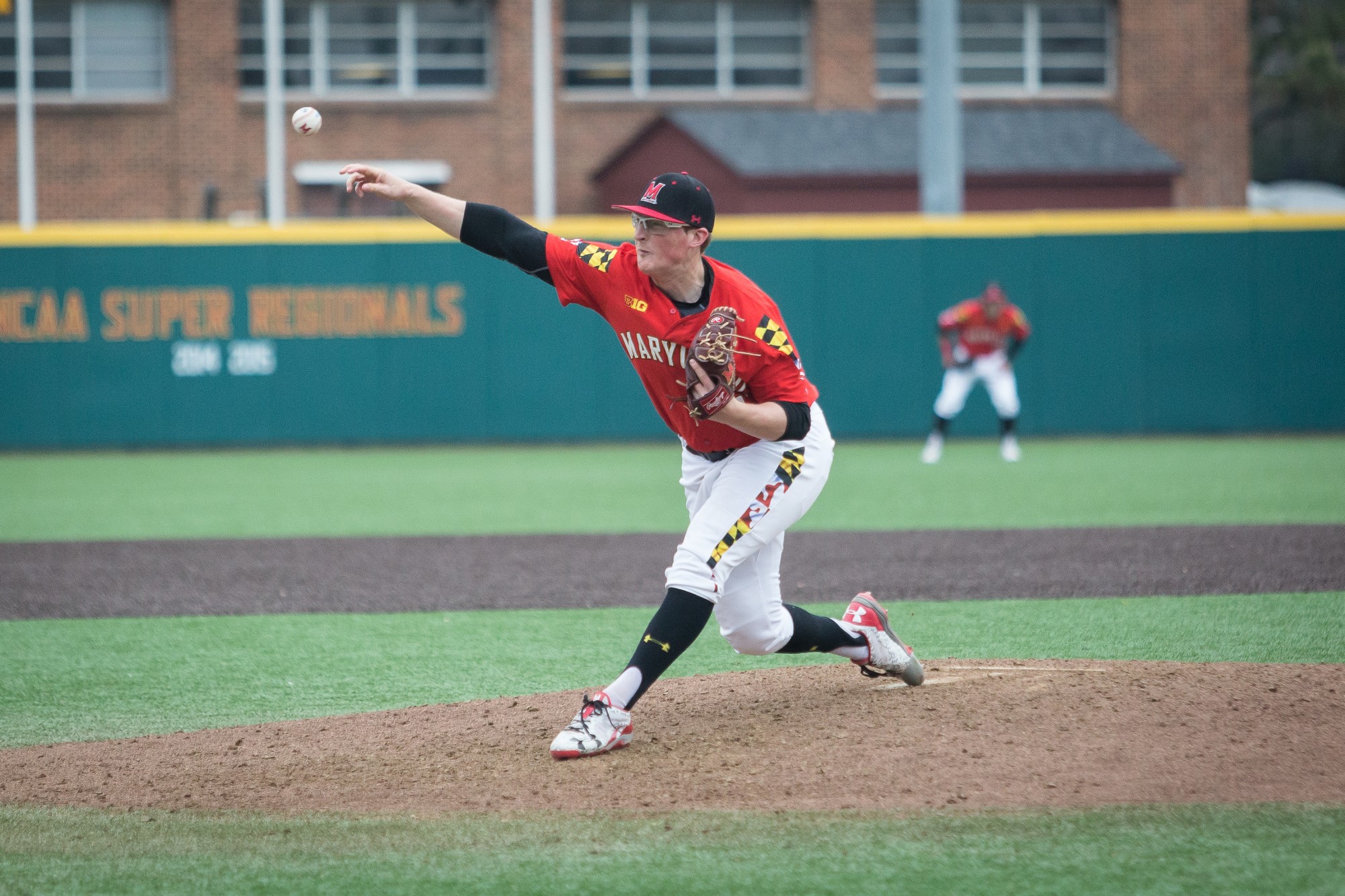 Right when Maryland baseball right-hander Mark DiLuia’s first career start appeared to be on the verge of implosion on Wednesday against VCU, the freshman tight-roped out of danger.

Historically, the Terps have lacked the necessary pitching depth to supply a capable starting option during midweek games, relying instead on their lineup to supply sufficient run support to squeak out wins. Maryland held opponents under five runs in just three of its 12 midweek games last year. The Terps allowed 10 runs in their midweek loss to William & Mary last week.

So with bases loaded and one out in the fourth inning on Wednesday against VCU, things didn’t look promising for DiLuia, regardless of his previous three steady frames. And when a fly ball tailed toward the right field line, the Rams seemed ready to tie the score at one.

But right fielder Randy Bednar angled behind the ball and threw a one-hop strike home to send Rams first baseman Mitchel Lacey scampering back to third. Then, DiLuia recorded his seventh strikeout to complete four scoreless innings, covering for a muted Terps lineup.

Maryland manufactured enough offense to secure a 2-0 win over VCU, capitalizing on a combined shutout from the Terps’ staff.

“Great teams win in a lot of different ways,” coach Rob Vaughn said. “Tonight, and really the last couple days, we’ve really pitched it and played defense, which is huge. I’ll take that any day of the week.”

Prior to Maryland’s matchup with VCU (3-6), Vaughn and hitting coach Matt Swope sent their batters insight from Cleveland Indians shortstop Francisco Lindor on how he managed to create an uptick in power from the year before.

Lindor swung at better pitches than he used to, Vaughn said.

Maryland (4-4) appeared to take in the logic of Lindor, the 2017 Silver Slugger and two-time All Star, showing more plate discipline than it had in the previous four games, when the Terps struck out at least nine times in each contest. It didn’t result in more offense, though.

“You know, the hitters just got to keep grinding,” Vaughn said. “The ability is there, the work is there. Sometimes you get in funks.”

Maryland loaded the bases against right-hander Hayden Moore in the fourth. Rather than relying upon a hit from catcher Justin Morris, who entered the contest hitting .105 without a base knock with a runner in scoring position, Vaughn elected to complete a suicide squeeze. The bunt from Morris scored shortstop AJ Lee from third.

In the fifth, Moore (0-1, 3.38 ERA) hit left fielder Marty Costes with a pitch. Center fielder Zach Jancarski then bunted him over to second base and Costes stole third, setting up second baseman Nick Dunn’s sacrifice fly to hand Maryland a 2-0 lead.

Entering the season, the inexperience of Maryland’s bullpen was the largest question mark surrounding a team returning much of a potent batting order. But eight scoreless innings were completed by first-time collegiate pitchers in Wednesday’s win.

“They’re by no means a finished product,” Vaughn said. “Just to see these guys continue to work, continue to grind, continue to get a little bit better has been a fun thing to watch.”

Because right-hander Hunter Parsons lasted 4 2/3 innings in Sunday’s win over Army – three more frames than the junior supplied in his season debut – the Terps bullpen had more in the tank than it did last week.

DiLuia (1-0, 4.00 ERA), who pitched 1 1/3 innings Sunday, offered four frames, and four relievers helped hold VCU scoreless, including right-hander John Murphy, who picked up his second save of the season after striking out the side in the ninth inning.

“I was pretty happy with the way I was feeling. I recovered well after only an inning and a third [on Sunday],” DiLuia said. “I knew if i went out there and gave my all and executed my pitches that we were going to be successful.”