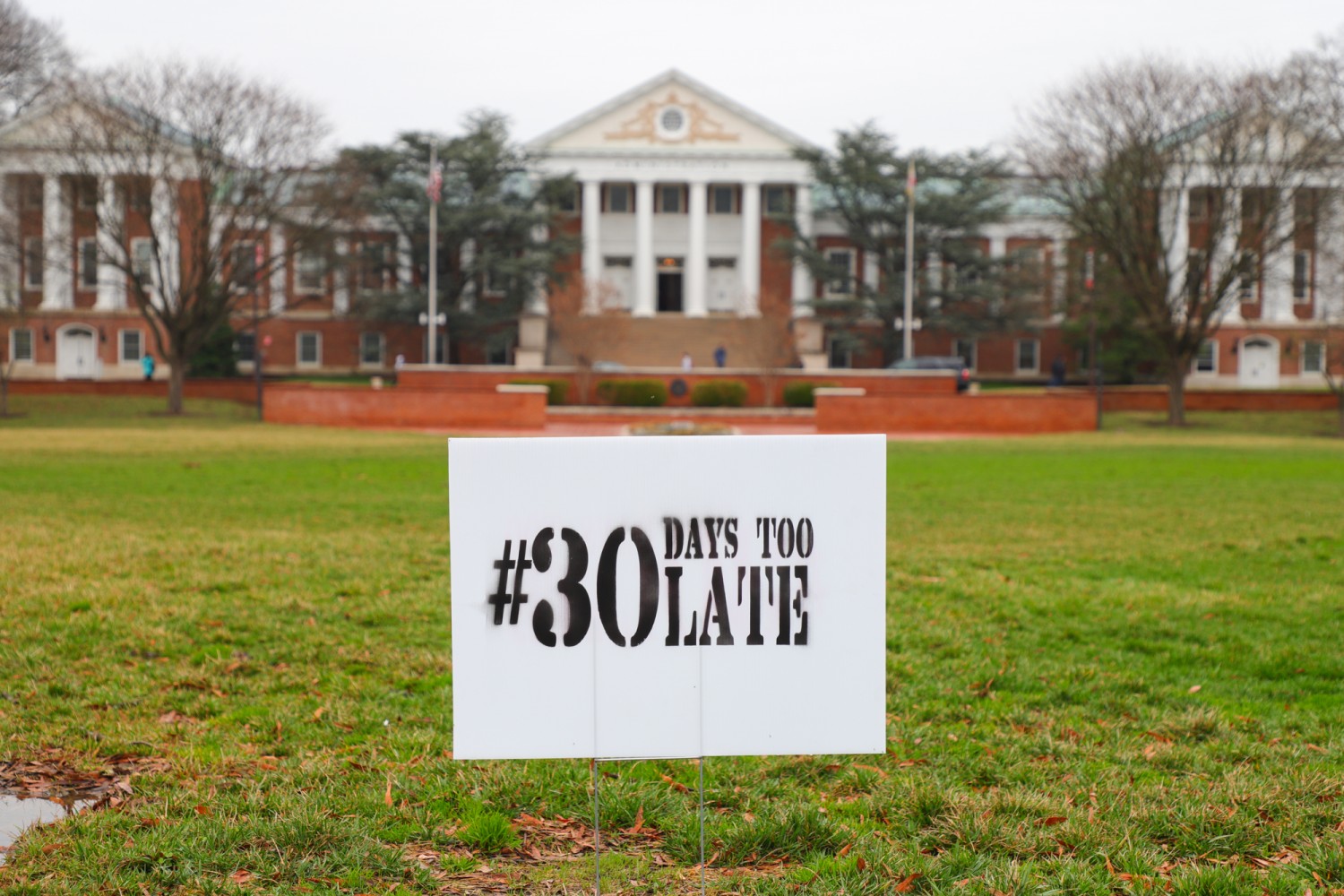 By Jillian Atelsek and Matt Perez

A University of Maryland student-led group sparked a campaign for increased accessibility to mental health resources on the campus.

Scholars Promoting and Revitalizing Care, a group formed by College Park Scholars members in 2015, launched a campaign on Feb. 14 called “30 Days Too Late,” which was named to reflect the amount of time it can take to receive an appointment in the counseling center. It seeks to draw attention to the lack of mental health and counseling resources at this university, said Alyssa Schledwitz, who serves as the group’s vice president.

Sharon Kirkland-Gordon, director of this university’s counseling center, said that while students can usually be seen for an initial consultation or intake appointment within two weeks, it is possible that some may have to wait up to a month for subsequent appointments.

“A lot can happen in 30 days,” said Schledwitz, a senior physiology and neurobiology major. “For someone who is close to crisis mode, 30 days can be too late to see someone.”

The counseling center uses a model of “short-term therapy,” to assist struggling students, Kirkland-Gordon said, offering eight sessions per 12 month period. According to the counseling center website, most students only need six sessions. Kirkland-Gordon added that some students have their issues resolved in the first meeting and don’t come back.

As part of its campaign, SPARC wants to increase the number of offered counseling sessions to 16. It also hopes to increase funding for the counseling center and the University Health Center, create an emergency action plan if wait times exceed seven business days and place a full-time counselor in every dorm, according to its website.

SPARC has applied for the Do Good Mini-Grant, which provides funding for student-led proposals that aim to create social change, and created a survey to assess students’ opinions on, and experiences with, this university’s mental health services. Group leaders plan to propose the survey to College Park Scholars directors next week.

The group chose to establish a SPARC liaison to the counseling and health centers, and the student group was invited to help interview new candidates to fill vacancies in the counseling center, Kirkland-Gordon said.

With the help of the SGA and Help Center, a peer counseling and crisis intervention hotline at this university, SPARC and the university administration plan to coordinate the hiring process for two new psychologists, Schledwitz said.

During the 2016-17 academic year, emergency room referrals for psychiatric crises at this university increased by 34, and student reports of self-injury increased from 29 percent in 2015-16 to 36 percent in 2016-17, according to a health center report. According to a 2015-16 counseling center report, the center has been subject to budget cuts and an overall loss of full-time employees. However, there has been a 24 percent increase in student demand in the past three years, Kirkland-Gordon said.

On Feb. 14, the group also sent a formal letter to university President Wallace Loh requesting that he acknowledge the issue and begin looking into possible solutions.

Loh has not yet directly responded to the letter, although a university email acknowledging the demands was sent from Clement to SPARC on behalf of Loh, said Anthony Sartori, co-president of SPARC.

“It’s kind of unfortunate because we did address him directly and he still hasn’t reached out to us about our concerns,” said Sartori, a senior psychology major. “It’s really an issue that affects all of us.”

Freshman finance and marketing major Huile Zhou said she supports the campaign, recalling friends who were affected by the prolonged wait times of the counseling center.

“I know friends who have had mental illnesses and had been really troubled by it,” Zhou said. “They found out that the [counseling center] was really crammed at that time, so they were forced to seek outside help, which I know isn’t exactly ideal for someone living on campus without transportation.”

Clement described SPARC as “terrific” and “constructive,” adding that university officials plan to meet with the group again in the future to analyze the results of their survey.

“Our goal here is to graduate people who are citizens and leaders in society,” she said. “And if there are challenges that we can remedy while people are enrolled at school here, that’s a wonderful thing.”