Even after apartment developments, most UMD underclassmen still live on campus 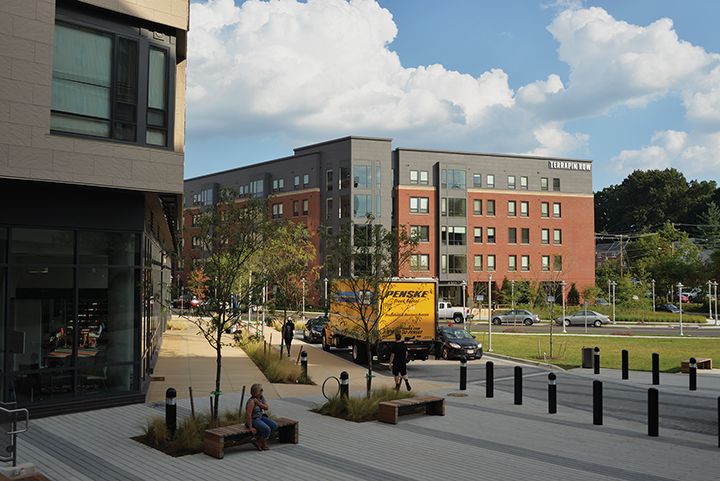 In spite of the recent development of apartment complexes such as Terrapin Row and Landmark, a majority of University of Maryland freshmen and sophomores are still choosing to live on the campus.

Several students cited cost as a main factor for staying on the campus, including Brandon Richardson, a sophomore computer science major.

“There was no use getting an apartment because I didn’t want to keep buying groceries and paying for utilities,” Richardson said. “I wouldn’t directly have to pay for rent and [my dorm] is close to the dining hall.”

[Read more: North Campus residents are getting a new dorm and dining hall]

A housing market study released last year by this university’s Department of Resident Life found that nearly 93 percent of first-time freshmen and 54 percent of second-year university students live on the campus, significant figures considering this university does not require students to live in dorms, according to the report.

“We wanted to get a sense of whether there was still enough demand for on-campus housing, given the recent announcement of construction of a new dorm on the varsity practice field,” Kiras said. Planning for this new dorm on North Campus and an accompanied dining hall began in February. The proposed dorm will cost $97 million and accommodate about 900 students.

The additional off-campus housing construction did not affect this university’s occupancy, Kiras said, adding that all dorms were filled this past fall.

“What was most enlightening for us was that the analysis revealed students have come to recognize the importance of on-campus residential experience,” Kiras said.

Many students decide to live on the campus their first year because of the dorms’ close proximity to the university’s amenities and class buildings.

“It was a no-brainer to live on campus,” said freshman Usha Konduri, an accounting major. “Living on campus gives me the whole experience of the campus. You get to meet all the other freshman that live here, which I think is an integral part of the college experience.”

Konduri is planning to live on the campus her second year because of the proximity to her classes and the experience of college life in dorms.

The housing market analysis found that while the off-campus market is catered toward students, it’s not fully meeting their needs, creating a continual demand for on-campus housing. Off-campus students polled for the housing market study said living off the campus did not foster a strong sense of community or engagement with the university.

The Brailsford & Dunlavey program management team recommended this university develop up to 2,600 beds of new housing by 2023, to satisfy demand and students’ desire for cost-effective places to live.

However, about half of students do move off the campus their sophomore year, often because they’re tired of living in dorm conditions.

Tessa Berlage, a sophomore accounting and government and politics major, lived on the campus her freshman year, but moved to Terrapin Row last fall.

“Now, I am not as connected as I was living on campus, but because it’s still so close to campus — just right across the street — I don’t feel like I’m off campus,” Berlage said.

Even though living in an apartment can be more costly than the dorms, by the end of her first year, Berlage said she needed her own space.

Melanie Bigelow, a senior communication major who also lives in Terrapin Row, said she moved off the campus for the “flexibility.”

“You don’t deal with RAs and you can have a lot more leeway than in a dorm,” she said. “It’s a little more costly, but it didn’t really alter my decision because it is close to the financial plan of a dorm.”