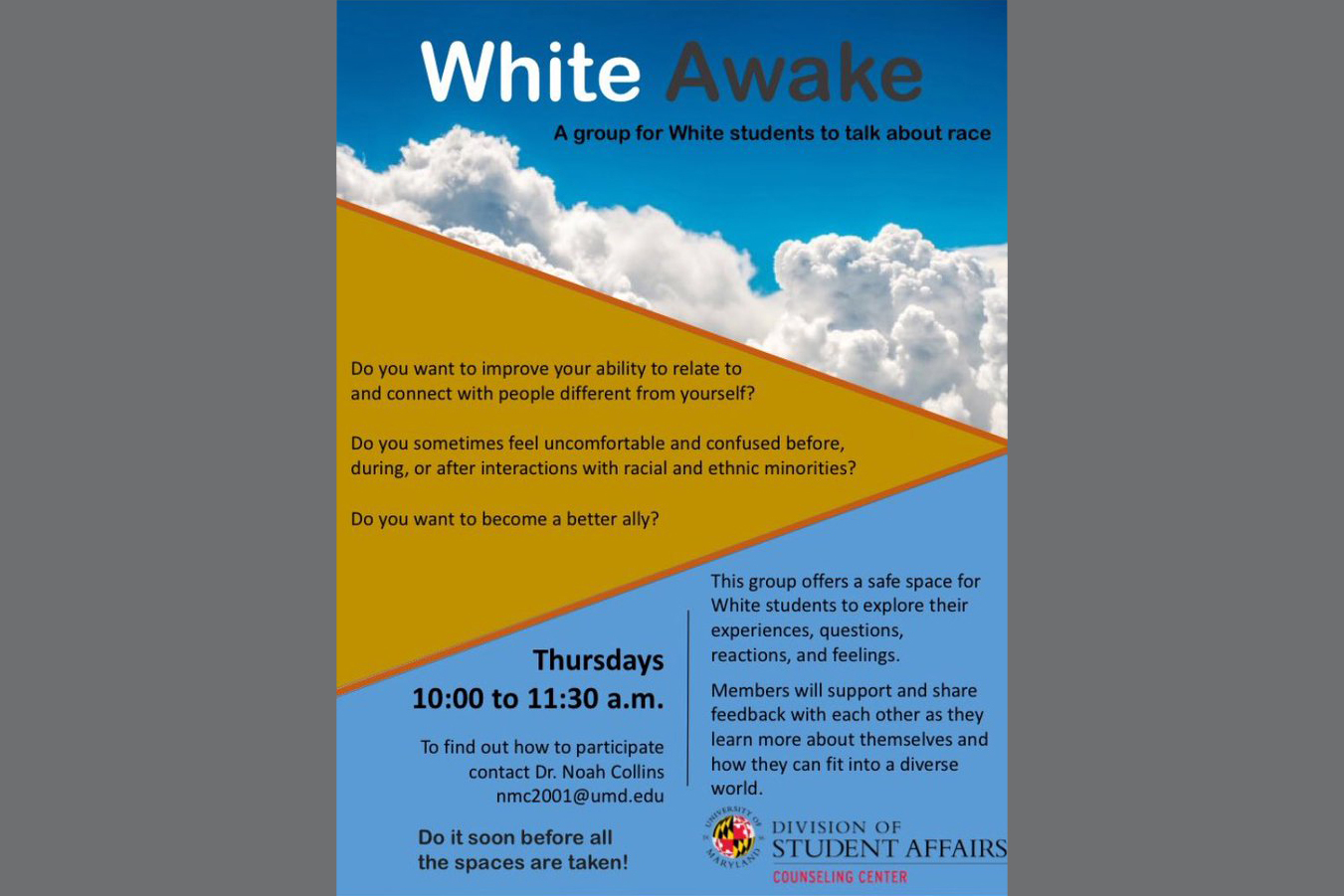 The University of Maryland’s Counseling Center is offering a new group, billed as a “safe space for white students,” to discuss race. This, in turn, has prompted pushback from some students.

The group, called White Awake, aims to provide white students an opportunity to “explore their experiences, questions, reactions, and feelings” on race, according to the Counseling Center’s website.

“Do you sometimes feel uncomfortable and confused before, during, or after interactions with racial and ethnic minorities?” a promotional flyer for the group read.

David Akerman, a sophomore journalism major, said the language being used to advertise the group concerned him as a Hispanic person.

“The way I interpret it is that white people are being victimized by interacting with us,” he said.

After students took to social media to express concern about White Awake, the Counseling Center said in a statement it would stop circulation of the flyer and consider changing the group’s name, but it stood by the group itself.

“We agree with the feedback that the flyer was not clear enough in conveying the fact that the purpose of this group is to promote anti-racism and becoming a better ally,” its statement read. “This is an incredibly difficult, nuanced issue, and that’s the reason we need to discuss it.”

Emphasizing the concept of a safe space for white students is also problematic, Akerman added.

“Some people could maybe interpret it as if the rest of the campus — where there are African-Americans, Asians or Hispanics — is not safe for white people,” he said.

I am so glad the @UMCounselingCTR has the resources to create this group, yet cannot accommodate to students who need immediate mental health assistance!!!! #30daystoolate https://t.co/Zs10pjMuwn

Improving diversity and inclusion has come up frequently in campus dialogue since the 2017 stabbing of Richard Collins III, a black student visiting from Bowie State University. Sean Urbanski, a white former student at this university, is awaiting trial on murder and hate crime charges in connection with Collins’ death. Since then, there have been dozens of hate bias incidents reported to university officials, including last week’s report of a swastika and anti-LGBT writing found in university dorms. Caleb Finesurrey, an education graduate student, said he thought the premise of White Awake was unnecessary because “the world is a space for white people to talk in.” “White people have laid down the rules and the groundwork, I feel like, and so they don’t need, necessarily, a privatized space,” Finesurrey said. “Whereas a minority group might not feel as comfortable talking in just a normalized place, white people can.”

POC Students never had the luxury to be provided spaces to learn about the reality of the world. No one held my hand learning about the various forms of racism. Tell them to take a damn African American Studies course and actually make an effort. — Fit Gawd Jeanist 😩🙌🏾 (@ixel_Ojedi) September 12, 2018

But James Radko, a freshman enrolled in letters and sciences, said the group could provide a refuge for white students who face hostility when they try to discuss race with “their more diverse peers.”

“It’s giving people a place to express their opinions on race and discuss important topics in a safer environment where they’re not facing direct opposition from other people,” he said. “In general, when people who are white discuss the topic, it’s seen as inherently racist.”

Radko said he thinks White Awake could be beneficial for white students who feel they face discrimination based on their race.

“The way they phrased it was that white people feel uncomfortable addressing a minority student, whereas we live in an uncomfortable state,” the junior environmental science and policy major said. “The world that we live in right now is very hostile and dangerous to us.”

Cerpa added that it’s frustrating to hear that white students “feel like they need their own space in order to learn about us as if we’re hypothetical,” despite the outreach and advocacy work her group does.

Akerman said he doesn’t think the campus will become more inclusive unless conversations about race include a wide range of perspectives — and are not targeted specifically to white students.

“If everyone who’s there is white, I don’t see how they’re going to be able to get a correct perspective for how to deal with other people of other races,” he said. “They don’t have the same experiences.”

CORRECTION: Due to a reporting error, a previous version of this article misidentified David Akerman as a freshman. This story has been updated.