‘A huge deal’: Jalen Smith neutralized one of the Big Ten’s most dangerous players 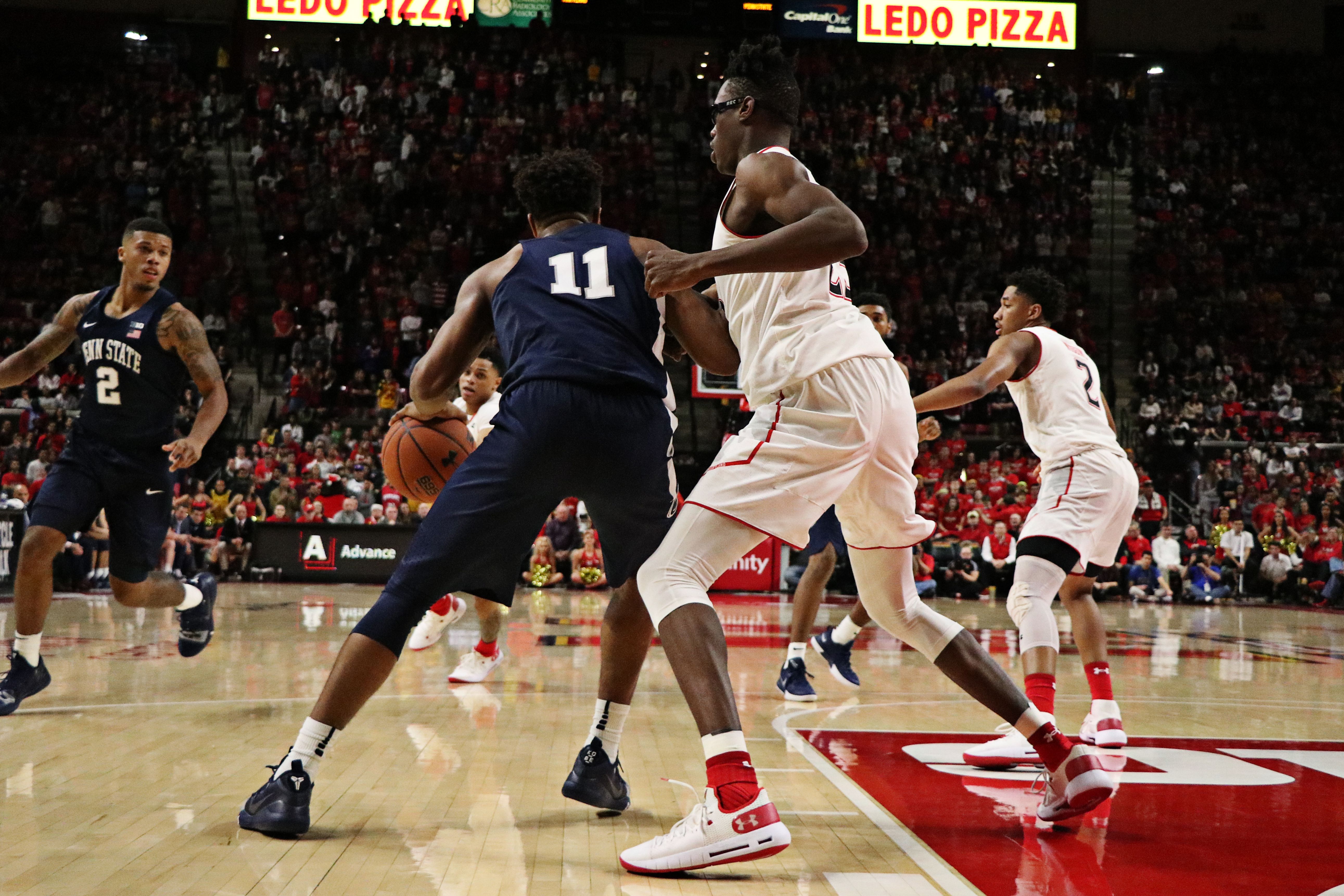 About seven minutes into Maryland men’s basketball’s 66-59 win over Penn State on Saturday, Nittany Lions forward Lamar Stevens caught a pass behind the three-point line on the right wing.

He sized up forward Jalen Smith and then tried to dribble past him to the rim. Smith walled him off, so Stevens spun, stepped back and took an eight-foot jumper with Smith’s arm in his face.

The contested shot rattled out, and Stevens ran back down the court, still in search of his first points as the game approached the midway point of the first half.

Eventually, Stevens would get some shots to fall. But it took him 24 shots to score 19 points, meaning Smith neutralized one of the Big Ten’s most formidable frontcourt scorers and passed what was the biggest test of his defensive prowess early in his Maryland career.

“That’s a huge deal today, what Stix did,” coach Mark Turgeon said. “Let’s not take that lightly. That’s a heck of a player that he was guarding, and for Stix to take that next step for us was really big.”

Entering Saturday’s Big Ten opener, Stevens was averaging 23 points and shooting 46.7 percent this season. So his 19 points and 9-for-24 performance from the field was an off-night for him, and it was caused by Smith.

“From the last practice, I just have been focusing in on Lamar,” Smith said. “Watching everything he does and studying him. Just so I could know how to guard him in the game.”

[Read more: Bruno Fernando and Jalen Smith showed they can be dangerous together against Penn State]

It showed. Stevens consistently tried to beat Smith — who’s a natural center — off the dribble, but couldn’t get past him. When Stevens employed one of the litany of post moves in his arsenal, the five-star freshman defending him was mostly game, remaining on his feet as much as possible and making everything tough around the basket.

“He took on the challenge and he responded,” forward Bruno Fernando said. “He did really well. That’s something to be proud of.”

Stevens’ first points came about nine minutes into the first half, when a series of shot fakes and pivots finally got Smith in the air, and Stevens finished through the contact to drain a tough shot.

From the bench, Fernando reminded Smith not to give up any position inside. Fernando stuck his arm out and yelled to Smith, ‘Elbow!’ imploring Smith to keep Stevens at a distance inside.

Fernando was better served coaching than defending Stevens; the rare occasions when he was matched up with the 6-foot-8 forward weren’t all that pretty.

“I am really proud of him,” Fernando said. “Obviously, we are going to have a lot of games with this level of difficulty, so he is going to have to guard a lot of [talented] players.”

Smith’s defense allowed him to stay on the court alongside Fernando for longer than in previous games. Turgeon has said Fernando is a complicating factor in Smith’s transition to college, forcing him to learn how to operate with another big on the floor.

Fernando’s presence inside has also forced Smith to play as more of a forward than he ever has in the past. But when Stevens tried to take advantage of that by drawing him out to the perimeter, Smith remained undaunted. And back at home in the paint, Smith rarely bit on Stevens’ fakes and crafty moves, a promising sign for one of Maryland’s most important players.

“It was a challenge guarding him,” Smith said. “I heard he was averaging at least 23 points per game, so just knowing that I was able to limit him to [19] just helped my team.”