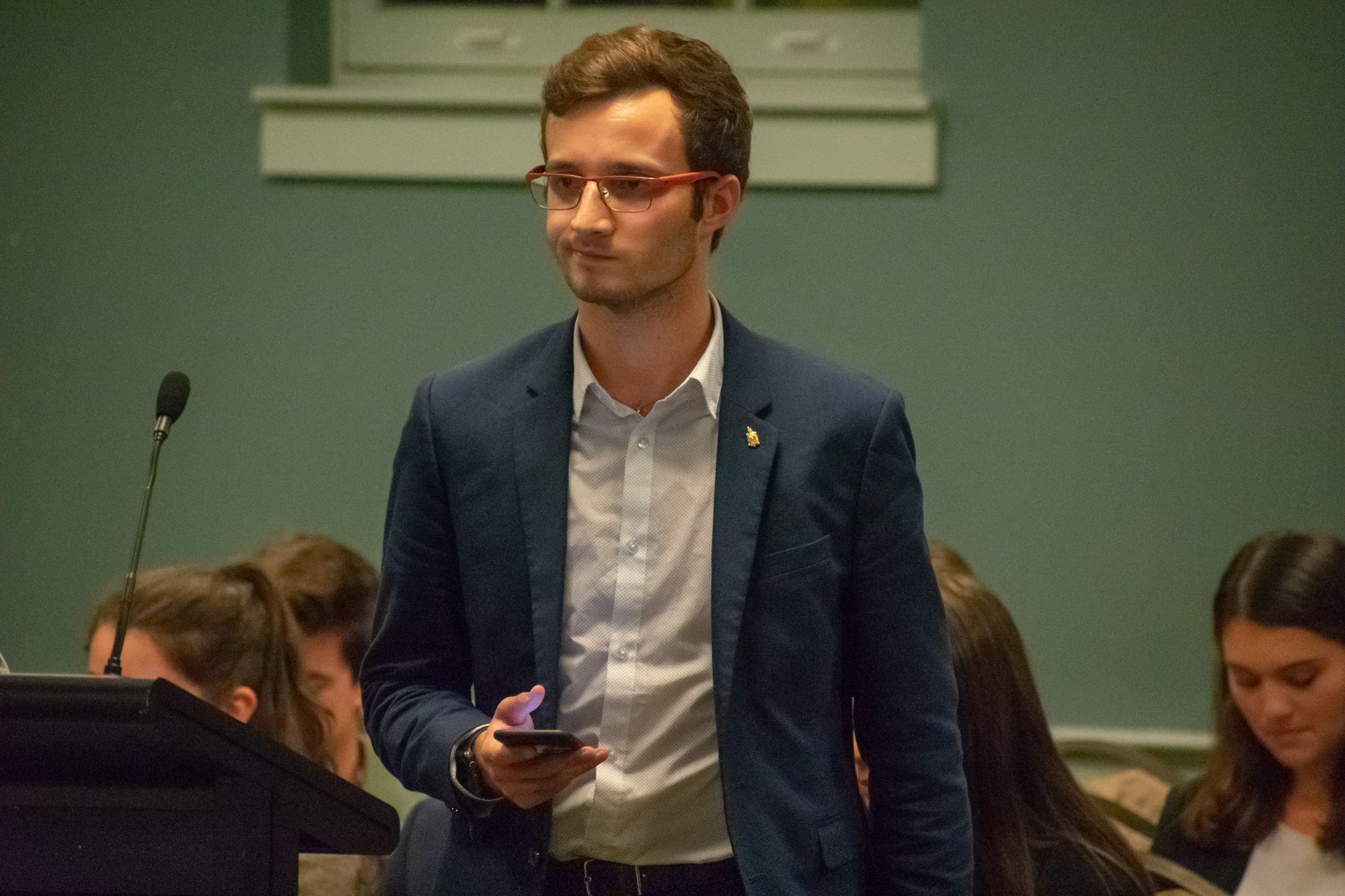 Jonathan Allen, the SGA president, stands at the podium at an SGA meeting on Oct. 31, 2018. (Elliot Scarangello/The Diamondback)

Multiple University of Maryland activist organizations have voiced their disapproval of SGA president Jonathan Allen’s speech at a pro-Israel conference.

After news of this surfaced on social media last week, six student groups signed a letter expressing concern that his appearance at the conference would give the impression that he speaks for the entire student body, including those who sympathize with Palestinians.

“The SGA President has every right to attend such a conference within his individual capacity or as a representative of other campus organizations he is affiliated with,” the letter reads. “However, it is unethical of Allen to attend the AIPAC conference representing the entire University of Maryland undergraduate student body, especially when students were never informed nor asked about this matter.”

The annual conference, currently being held at the Walter E. Washington Convention Center, is regarded as the “largest gathering of America’s pro-Israel community,” according to AIPAC’s website.

While the conference has long hosted politicians and speakers from across the political spectrum, it’s been more polarizing this year.

After controversy surrounding Rep. Ilhan Omar’s (D-Minn.) criticisms of Israel and its relationship with the U.S., at least seven Democratic presidential candidates have said they won’t be attending. In response, President Trump has accused the Democratic Party of being “anti-Jewish.”

Currently, 47 members of Congress — 25 Democrats and 22 Republicans — are slated to speak at the conference, according to its website.

Students for Justice in Palestine, one of the groups that signed the letter, has said that AIPAC’s views on Israel are not representative of the student body.

“AIPAC is an organization that has a history of Islamophobia and anti-Arab rhetoric,” said Shivam Shukla, a member of SJP. “[Allen] going as the SGA president is basically giving the idea that the whole student body — or at least the majority of the student body — supports this position or supports AIPAC.”

But Allen said he didn’t expect conference attendees to assume he’s speaking for the entire university.

“For someone to believe that 30,000 students can be in agreement is unrealistic,” the senior government and politics major said.

Linda Clement, this university’s student affairs vice president, replied to the letter by saying that the university doesn’t endorse Allen, and that he doesn’t speak on its behalf. But the student groups want Allen to make a public statement clarifying that.

“This is not a matter of picking sides,” the letter reads. “This is a matter of accurately representing the views of the student body and of the SGA.”

Blanca Arriola Palma, the president of Political Latinxs United for Movement and Action in Society, helped write the letter. She said Allen should have no problem clarifying his reason for attending.

“It might so happen to be that Jonathan Allen is not intending to attend this in his capacity as SGA president,” said Arriola Palma, a senior government and politics major. “If that’s the case, then there shouldn’t be any issue coming out with a statement.”

This was the seventh time Allen has attended the conference, and his third time as a speaker. He said he’d make a disclaimer before he spoke that all views are his own.

Allen has also spoken to administrators about putting out additional statements to ensure students are satisfied.

The Israeli-Palestinian conflict has become a more contentious issue in the last few years.

In January, an alumnus of this university sued Republican Gov. Larry Hogan and Democratic attorney general Brian Frosh in response to an executive order that would force Maryland companies to pledge they would not boycott Israel.

In November 2017, the SGA shot down a bill that would have called on this university to divest from companies that do business with Israel. After 61 students gave their thoughts on the bill — with the majority opposing it — the Student Affairs committee voted 21-1 with three abstentions to give the legislation an unfavorable review.

Both Shukla and Arriola Palma emphasized they didn’t want to prevent Allen from attending the conference — they just wish he’d let them know he was going from the start.

“That is a matter that should have been up for discussion within the SGA legislation or something that students overall on campus should have the had the opportunity to express their concerns with,” Arriola Palma said.

Shukla, a sophomore computer science and environmental science and policy major, said if Allen was planning to go to the conference, he should have informed students first —instead of leaving them to find out on social media.

Allen said that while he’s aware of some students’ concerns, they might be a little unrealistic.

“Am I supposed to ask every student for permission?” he said.