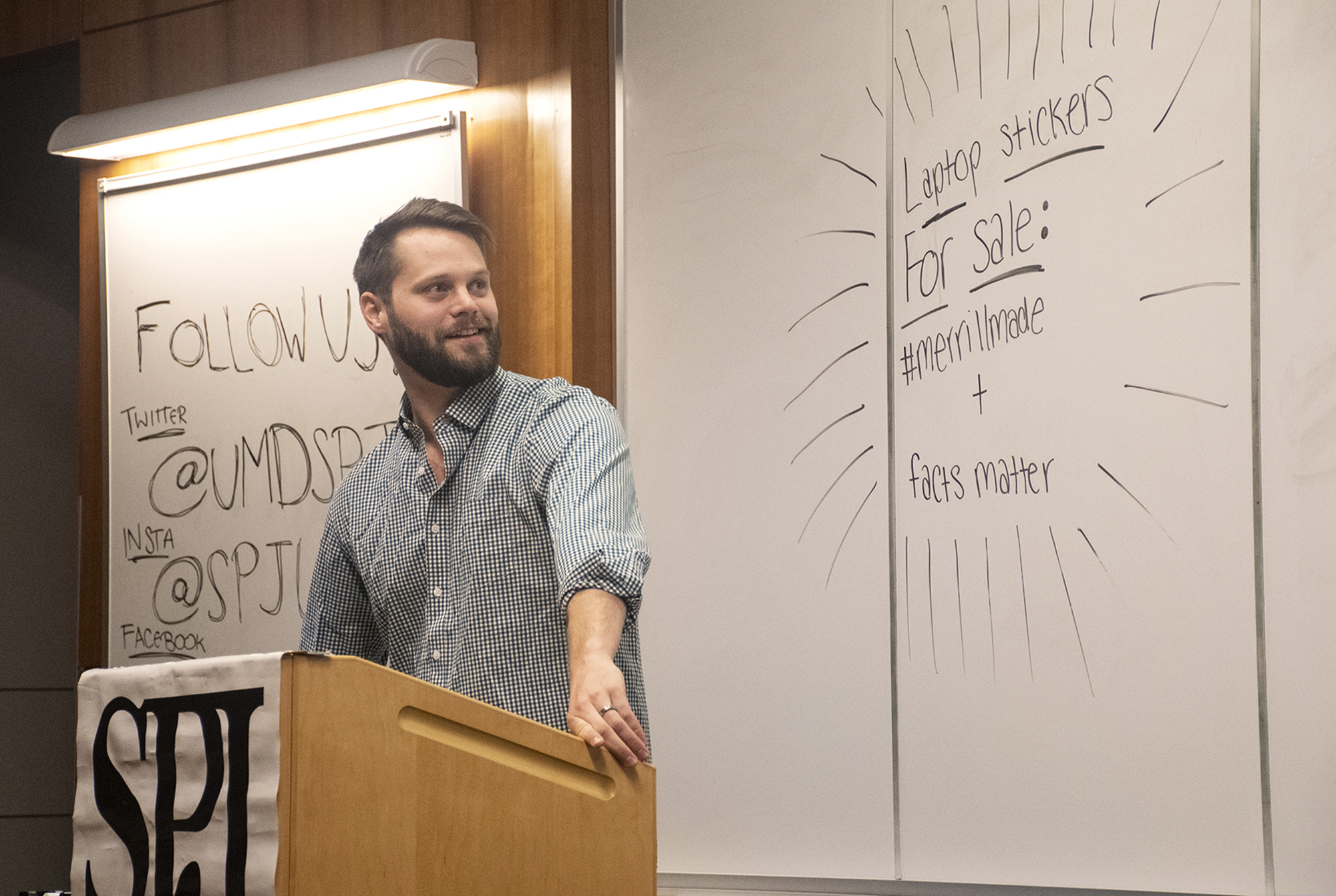 TikTok producer Dave Jorgenson speaks at the journalism school on Feb. 4, 2020 about using the platform for the Washington Post. (Susannah Outhier/The Diamondback)

He could have been in Iowa for the presidential primary, or at President Trump’s State of the Union address.

Instead, the day after a caucus that had more technical issues than WiFi, TikTok aficionado and Washington Post video producer Dave Jorgenson visited the University of Maryland’s journalism school for a presentation and Q&A Tuesday.

“I was just a little nervous about the Iowa caucus,” said Emily Waldenberg, president of this university’s Society of Professional Journalists chapter, which organized the event. “I had nightmares he wouldn’t show up.”

Jorgenson is well-known as the face of the newspaper’s presence on the app, his videos featuring everyone from Super Bowl MVP Patrick Mahomes to Democratic presidential candidate Andrew Yang. The digital producer heads the Post’s TikTok profile, which declares “We are a newspaper,” and blends news and voice-over formats popular on the app.

And, yes — he knows some of his viewers are not regular subscribers to the Washington Post.

“I think some people think my name is Washington,” he said.

Regardless, Jorgenson hopes the app will introduce the public to the newspaper on a non-newsy platform. He wants to encourage conversation about more serious videos, such as the one that features the correct pronunciation for Iraq and Iran.

He also acknowledged TikTok is a way to reach younger people.

“The image of a journalist is someone older and out of touch,” freshman journalism major Daryl Perry said, adding he was happy to see someone younger and more hip to social media.

[Read more: Can TikTok become the next SoundCloud?]

Jorgenson walked the students, many of whom were multimedia or video journalists, through the pitching and editing process, and what it’s like to use an informal medium as a professional organization.

Given that a new platform comes with new challenges and needs for creativity, Jorgenson also explained how he defends his TikTok ideas. Showing there’s an audience for them is “one of the most important things,” he said.

Some students were curious what Jorgenson had in mind if that audience faded, with TikTok falling out of fashion in an ever-changing media environment.

“It’s just continuing to go with the flow and see what people are responding to,” he said.

CORRECTION: Due to a reporting error, a previous version of this story used the incorrect pronouns for Daryl Perry. Perry’s preferred pronouns are he/him. This story has been updated.