T-shirts, face masks and fanny packs: How a UMD alumna’s business is fighting the pandemic 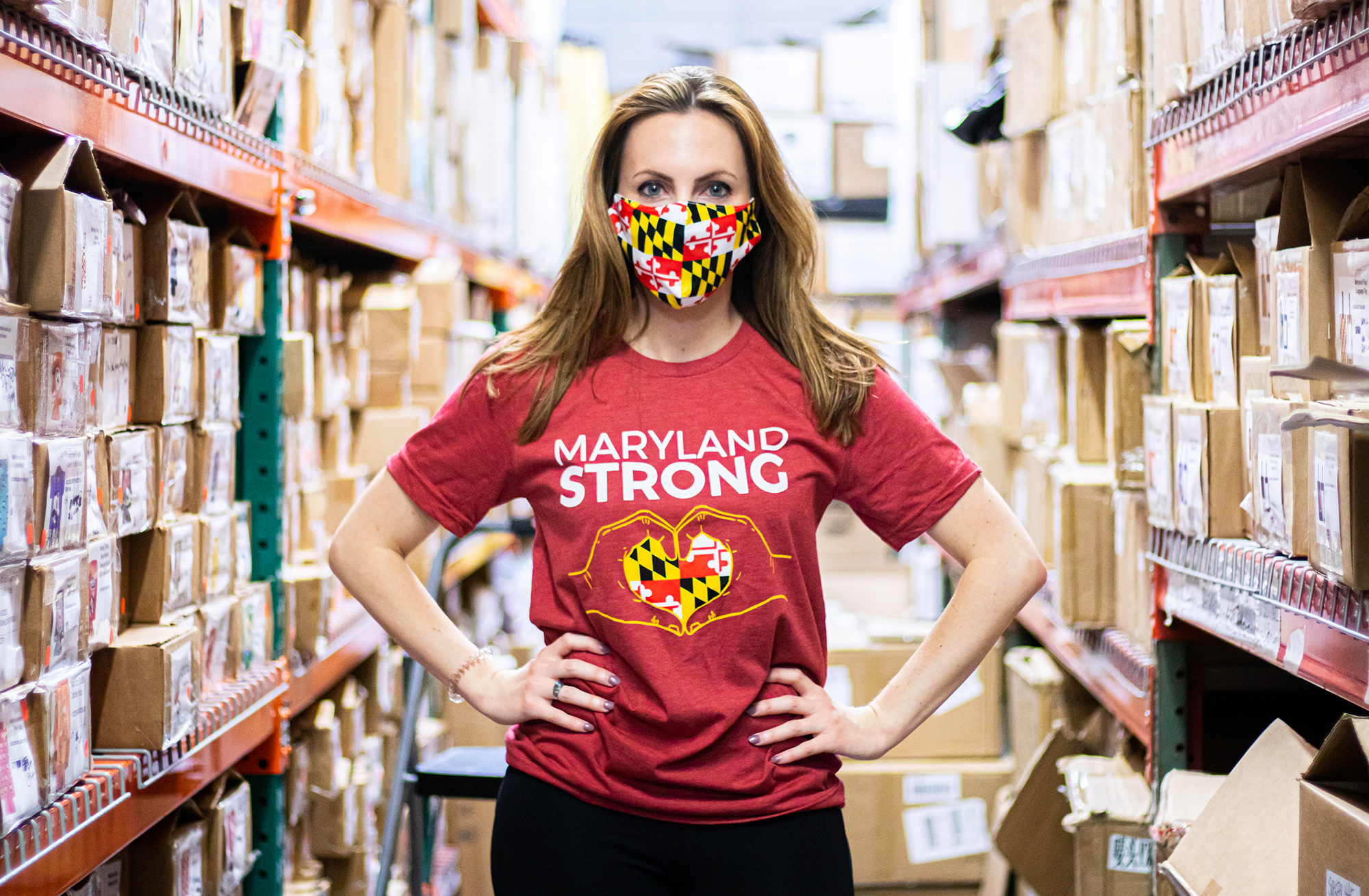 Ali von Paris, a University of Maryland graduate and Route One Apparel’s founder and CEO, in the company’s headquarters on May 1, 2020. Von Paris is wearing a Maryland Strong shirt and mask, part of Route One Apparel’s coronavirus pandemic-inspired line. (Julia Nikhinson/The Diamondback)

In Maryland, folks love their state flag. Its red, yellow and white pattern is plastered everywhere from the University of Maryland’s emblem to the shield that sits atop the Baltimore Ravens’ home field.

Now, the flag can also be seen on face coverings across the state.

Route One Apparel, an e-commerce company that sells state pride-themed clothing and accessories, has pivoted toward making face masks amid the coronavirus pandemic. In doing so, the company is aiming to not only curb the spread of the virus but also to support small businesses.

“It’s crazy. I never thought that I would be selling face masks in the history of my business,” said Ali von Paris, Route One Apparel’s founder and CEO, who graduated from the University of Maryland’s business school in 2012.

The shirts started picking up steam, she said, which helped popularize the company.

Von Paris said people began asking Route One Apparel to start selling fabric and masks — so, the company decided to offer face masks for $10 each.

Then, on April 15, Maryland Gov. Larry Hogan required face coverings be worn in stores and on public transit.

Just like other products the company sells, the masks feature designs that are quintessentially Maryland: Some are printed with the state flag and others include the Old Bay logo.

“We wanted something fashionable for people,” von Paris said. “We wanted to develop something that is reusable, washable [and] easy to clean.”

Hogan has been especially supportive of Route One Apparel’s efforts, posting a picture on Twitter of him wearing the “Stay Home, Hon” shirt. He even gave the business a shout-out during a press conference on April 22 — and wore a “Maryland Strong” mask before starting the conference.

“It shows how anyone … can be a part of our efforts to save lives and to defeat this hidden enemy,” he said. 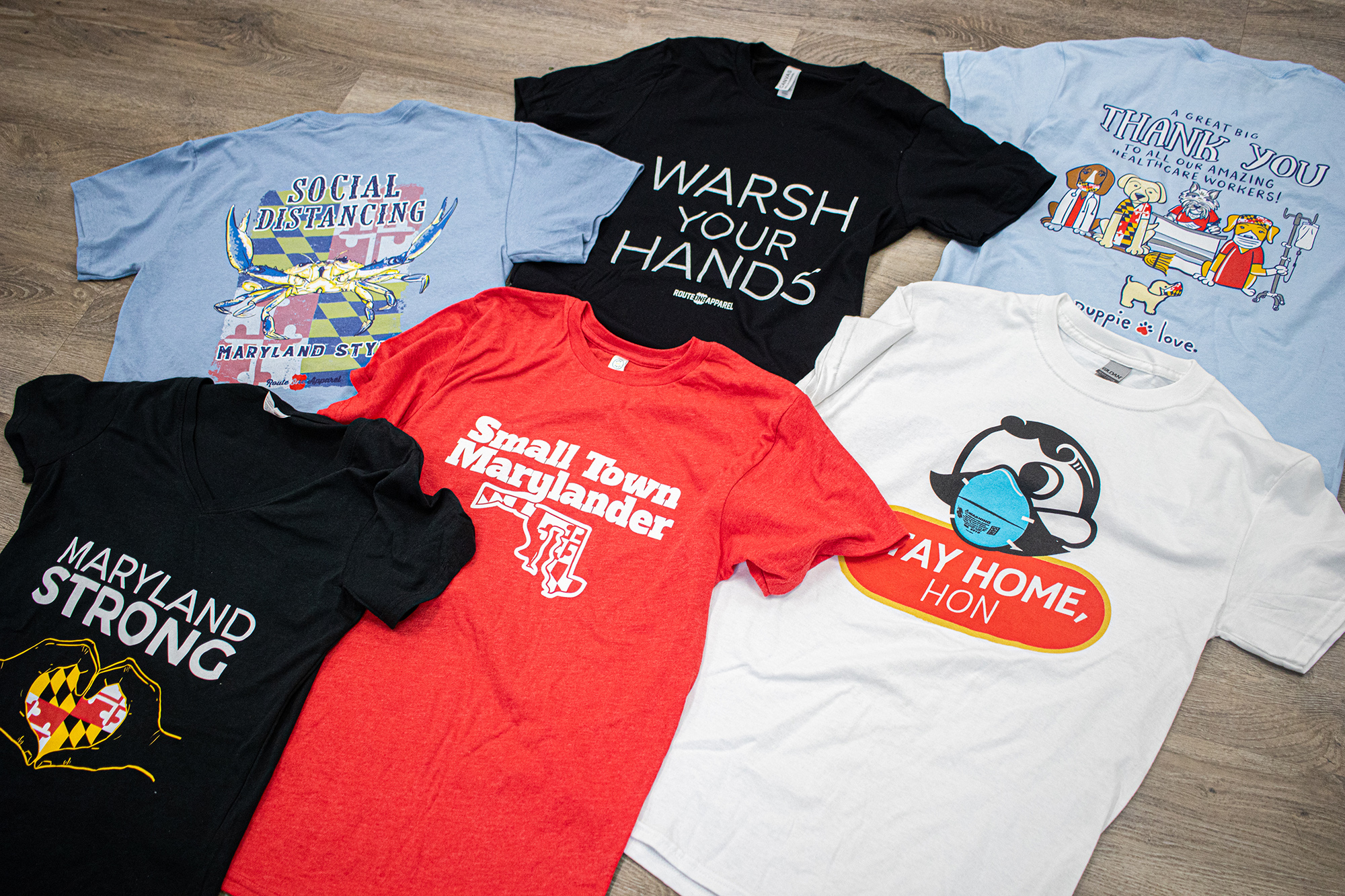 Since the beginning of the coronavirus pandemic and the implementation of public health guidelines in Maryland, Route One Apparel has released a variety of social distancing-themed shirts. (Julia Nikhinson/The Diamondback)

Route One Apparel also kicked off a “buy one, give one” initiative, donating a face mask to Maryland health care workers and first responders every time one is purchased. And when the state’s confirmed cases began to spike, von Paris donated Route One Apparel’s entire stock of fanny packs to hospital employees.

But the business has had trouble keeping up with demand, von Paris said. It currently has a 15 to 20-day backlog in orders for face masks.

“We had no idea the amount of interest these masks would have to our customer base,” she said.

In following guidelines issued by the Centers for Disease Control and Prevention, von Paris said the company is limiting the number of staffers in its office, making the backlog even more difficult to manage.

Route One Apparel also sells its products in different retail stores, von Paris said, which have been closed since Hogan announced on March 23 that all non-essential businesses — including many shops — would have to close their doors. Von Paris said she reached out to the stores that typically distribute her company’s products to see how she could help them. 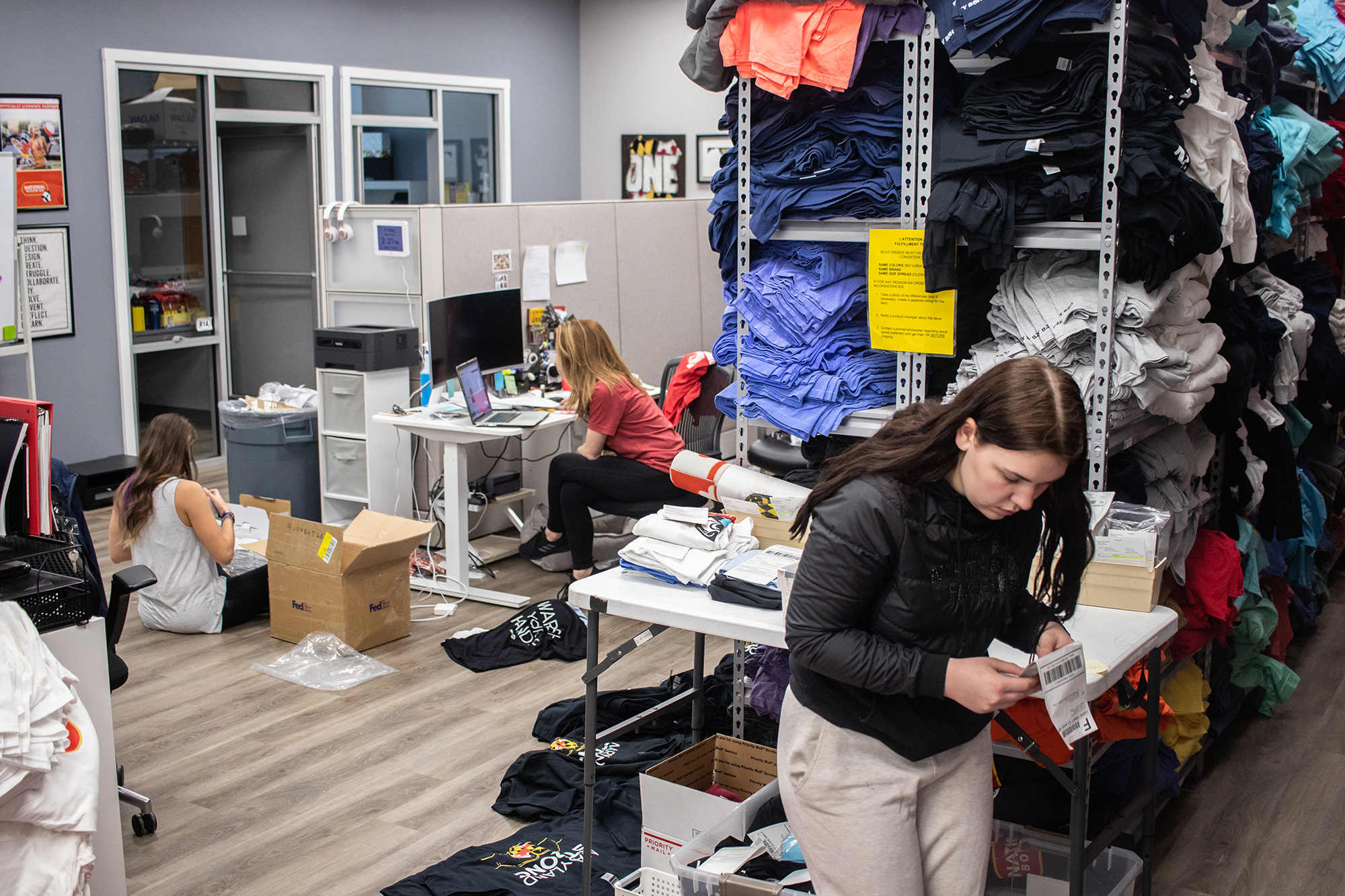 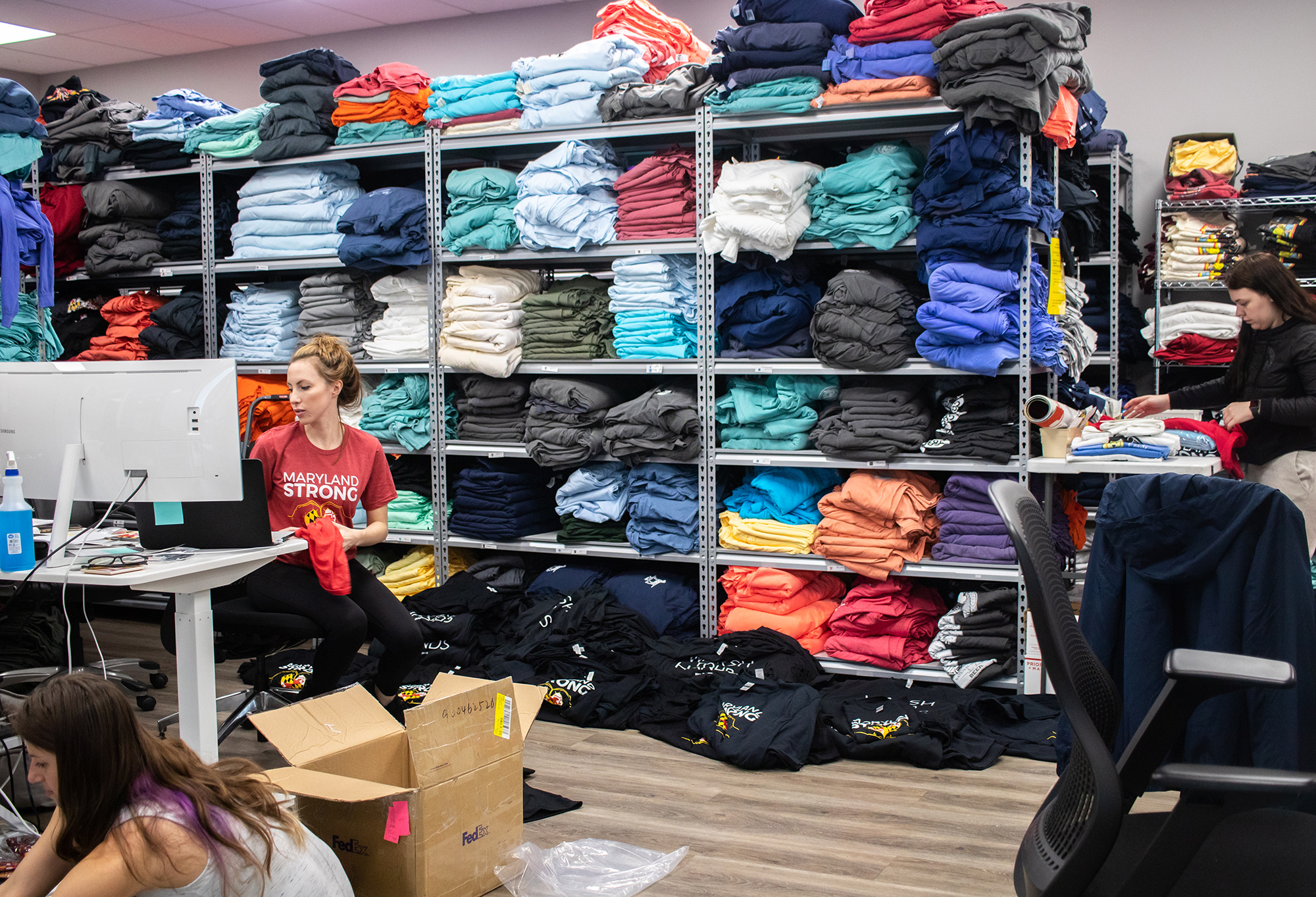 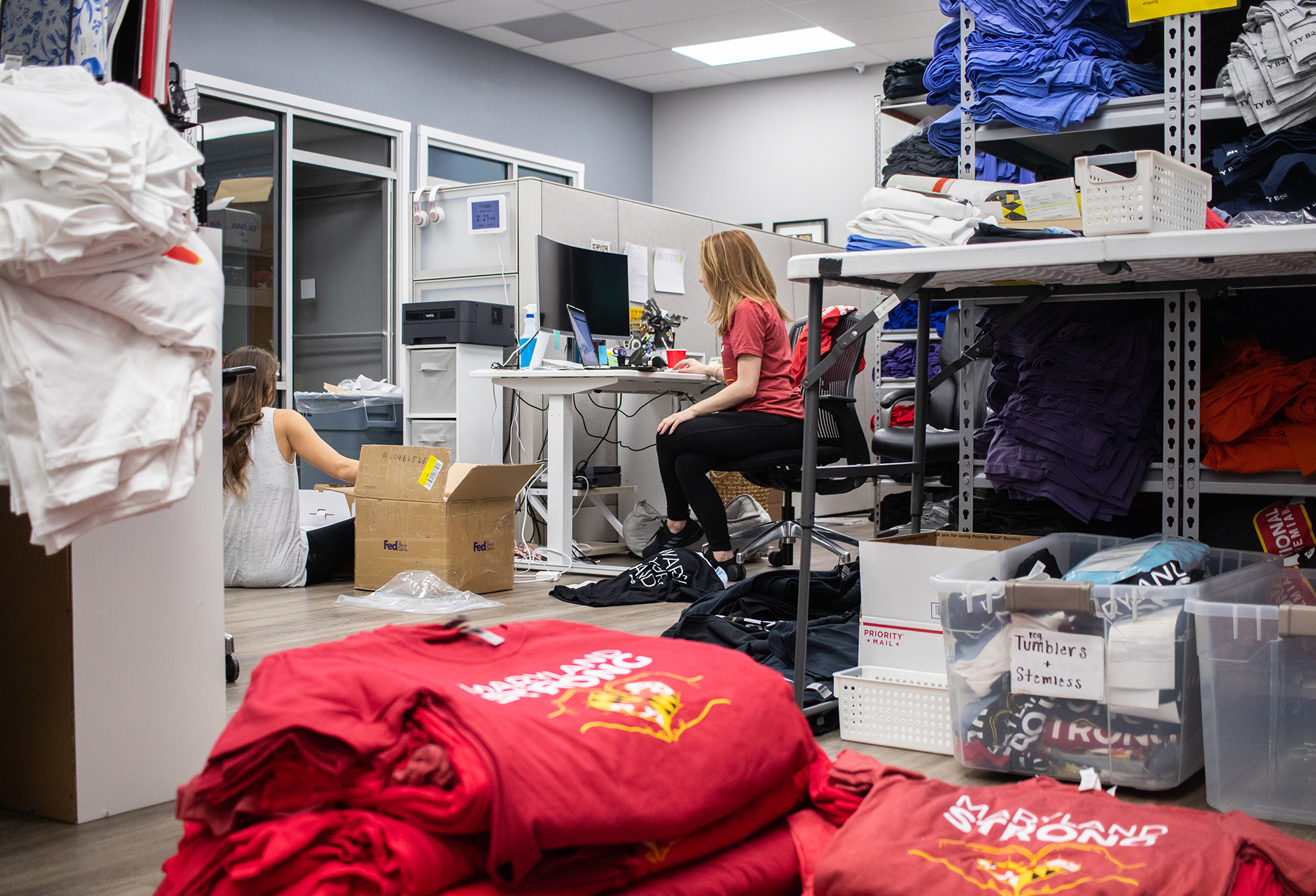 One such business is E.C. Pops, which typically sells Route One’s Maryland state pride apparel in three locations across the state. Von Paris is letting the business sell her products on its website and letting it keep all the proceeds from the orders.

Lance Sovine, who co-owns the business with Douglas Yeakey, said von Paris’ help has allowed them to continue paying their health and business insurance costs.

He and Yeakey had to furlough their employees due to financial strain brought about by the pandemic. They’ve also been unable to pay rent for their storefronts in Baltimore, Ellicott City and Cockeysville. But Sovine said he’s grateful that von Paris has been helping them stay afloat.

“If it wasn’t for Route One Apparel and the little bit of help that we’ve been lucky enough to get … we’d be out of business … by June,” Sovine said. “We’re toast.”

This wasn’t the first time von Paris lent them a hand, either. When rain pummeled Ellicott City in 2018, Sovine said their store in the area was flooded.

However, the day after the flood, Sovine said von Paris offered up a stall they could use as a store location in Cockeysville, Maryland. She also took care of their employees’ salaries for the following six months, he said.

“Here we are, like two years after losing everything, and there’s Route One Apparel,” Sovine said. “There’s Ali von Paris, yet again.” 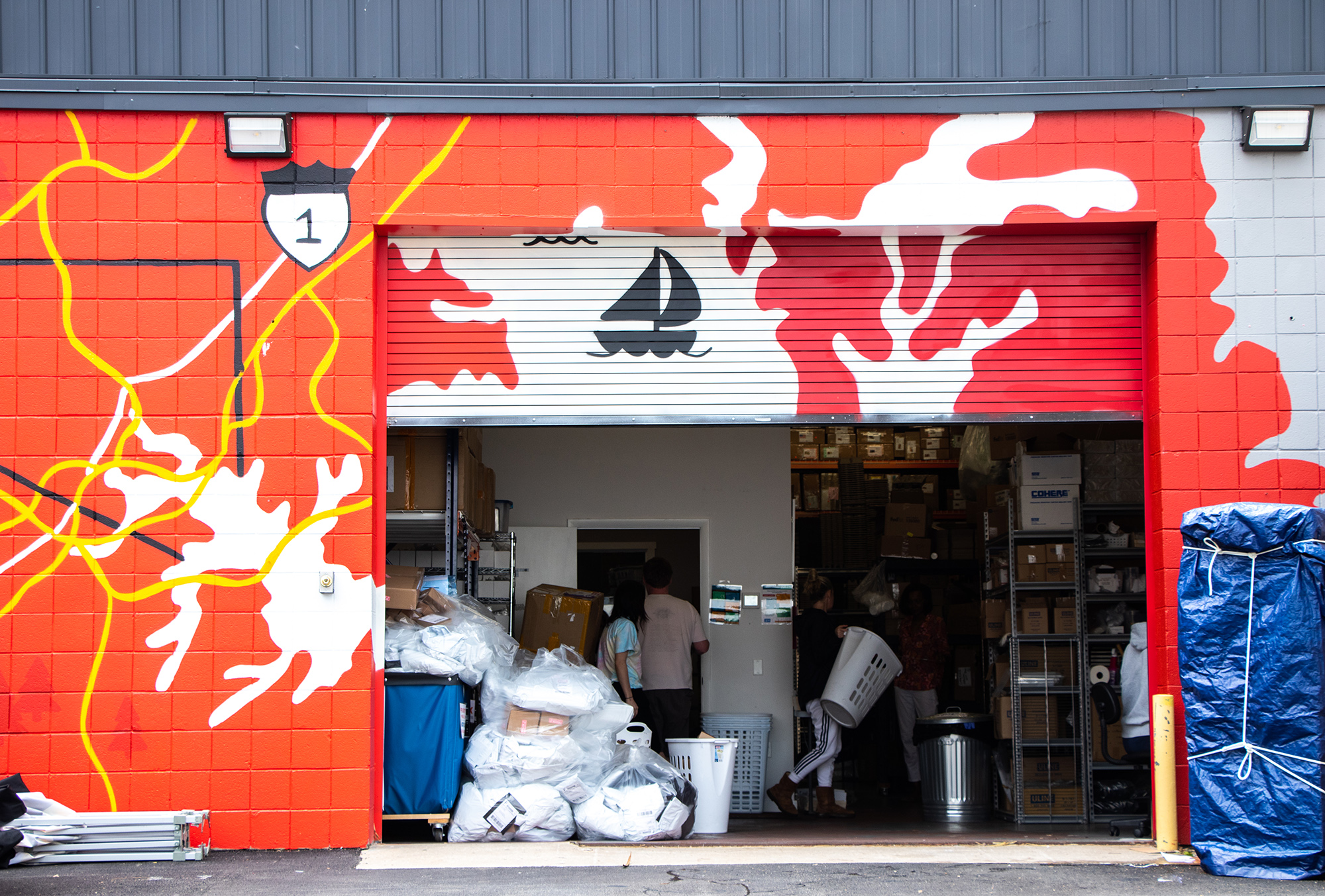 As business picks up, workers hustle to organize and ship merchandise inside the Towson-based warehouse. (Julia Nikhinson/The Diamondback)